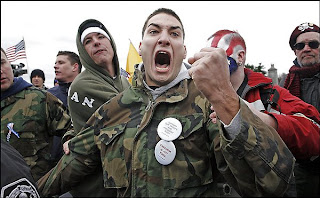 The silent majority has begun to make itself heard. Politicians and protesters who attempted to boost the spirits of our enemies this past weekend for political gain found that they didn't have Washington all to themselves. Finally, a significant counterdemonstration was held.

Best of all, many of our men and women who have actually served in Iraq participated in the counterdemonstration and gave an earful to those who are attempting to demoralize our armed forces and devalue their mission. In the photo above (by Marvin Joseph, Washington Post) is a Marine who, like many veterans, has had enough of the garbage being generated by the armchair generals in Congress and the liberal media. Images like these are putting a face on the troops whose mission and safety are now in question thanks to the Democratic Congress.

Significantly, these soldiers and veterans of other wars were forced to stand out the cold to not only defend America's mission, but their own memorials. After several disgraceful acts of vandalism by anti-war demonstrators, there was tremendous concern that the Vietnam Veterans Memorial and other sacred landmarks were in danger of similar treatment. Thanks to the efforts of military and civilian volunteers, and the police, no such incidents occurred.

This counterdemonstration was a turning point. Much like the Republicans chanting, "Let us in!" as Democrats searched for Al Gore votes behind closed doors in Florida, it was a turning point that has put the momentum behind us again. There is a long way to go, however, and let's hope that the surge continues to work, slowly but surely. No one knows the risks better than our soldiers, so let's give them the maximum support.
Everyone can help our troops in small and large ways through organizations such as:
www.MoveAmericaForward.org
Posted by Robert Dyer at 9:46 PM No comments:

Captain America is dead. And, by extension, we are to come to some gloomy conclusion or another about America in general. This is the kind of news that warms the hearts of people like Martin O'Malley, Frosh - Bronrott - Lee & Goldwater, E.J. Dionne, Jacob Weisburg, and the editors of the Washington Post. And now, they will refashion it anew even as they deny that the old America, its way of life, and its values never really existed.

Well, maybe their Captain America is dead, but ours isn't. It's my understanding that Captain America hasn't been quite himself in the comics for some years now. In a post 9/11 era, when the Captain should have been experiencing a golden age of resurgence and relevance, he apparently was portrayed as having mixed feelings about the war on terror. Instead of fighting our enemies, he was sometimes sympathetic to them. I'll withhold total judgement not having read these books myself, but this doesn't sound like the Captain America I knew as a child. It seems that the liberals in Hollywood who unquestionably do symphathize with America's enemies feel the need to remake the greatest American heroes. Thus America's patriotic Superman reemerges in 2006 as an amoral deadbeat dad in the abysmal, family-unfriendly Superman Returns.

The bad news for those enjoying the good Captain's demise is that the surge in Iraq is working. And with the emphasis on anti-American protests in Latin America over the last few days, you might wonder why at this hour there are any number of Latin Americans making a dangerous crossing of our border. Why? Because they want to live in America, and they are willing to risk their lives to get here. If the world hates America, why do so many people all over the world want to be Americans? Captain America and America are alive and well. Let's make sure it stays that way by exercising our right to vote in 2008 and 2010.
Posted by Robert Dyer at 9:04 PM No comments:

Brian Frosh wants you to have dishpan hands. This garbage coming out of Annapolis would be laughable if it wasn't so sad and frightening. Sad because it is absolute garbage and an absolute waste of our time when all the major issues are being completely ignored. Frightening because Maryland is going to be a very strange place by 2010 if the current legislative pattern continues. We are simply at the mercy of a radical, Democrat monopoly in our state capitol. If the Silent Majority is still out there, you have certainly earned your title. And you must, must come out to vote in 2008 and 2010. Just consider what's happening now because you didn't vote in 2006, and realize what happens when you are tricked by the liberal media into sitting out an election.

Brian Frosh, exercising absolute power with the O'Malley rubber stamp, has gone off his rocker again and is now going to outlaw all of the dish detergents you now buy at the grocery store. Our state legislature was already a national laughingstock, so you can imagine what people around the country must think of us when they hear this one. According to Mr. Frosh, and the environmental extremists, phosphorus in dish detergent is what is polluting the Chesapeake Bay. This, of course, is absolute hogwash, absolute fantasy. But he's going to unilaterally take this off your shopping list and your grocer's shelf, and replace it with a "green" detergent that won't properly clean dishes. Just because he feels like it. Brian Frosh gets up one day and says, "I think I'll ban car washes today." With no scientific credentials whatsoever, he simply draws up a bill to close car washes. His committee approves the bill. His Democrat legislators vote in lockstep. It passes. Governor O'Malley rubber stamps it. Car washes close all over the state of Maryland. This is no exaggeration, this is the manner in which Brian Frosh and other radical Democrats in Annapolis are now running our government. At risk is nothing less than the American way of life.

So, get this, you are the cause of Bay pollution according to Brian Frosh. Not the power companies that write the checks to our District 16 delegation, not the polluters who write their checks, and not the medical waste from Pennsylvania. They're doing nothing about any of that. No, it's you, the taxpayer. Your car. And now Brian Frosh decides what kind of car you can buy and how much it will cost. And your... dishes! Meanwhile, PEPCO's toxic waste dump remains by the Patuxent River. Outrageous. And of course, those checks they get from PEPCO have nothing to do with this. Oh, no, certainly not. Absolute hypocrites.

Brian Frosh is taking away your dish detergent. What will it be tomorrow? Again, Mr. Frosh demonstrates his belief that public servants are to be served by the public. And I ask you again, are you ready to serve him? Or is the Silent Majority going to finally speak out?
Posted by Robert Dyer at 9:31 PM No comments:

And the hits just keep on coming. What does our County government do when it's not busy violating the Americans with Disabilities Act during the winter? And what does PEPCO do when the company isn't busy writing checks to our Democratic delegates in Annapolis? Why, they join forces to cover up a "secret" toxic waste dump on PEPCO property near the Patuxent River in eastern Montgomery County!

This is all reported in today's Washington Post, which buried it back in the Metro section when it should have been front page. Is that in exchange for all that advertising the County government buys in the Montgomery section? This is outrageous, and once again the extreme hypocrisy of our Democratic elected officials on the environment has been laid bare. They're going to control what cars you can buy, make them cost thousands more, and raise gas taxes, but meanwhile permit a toxic waste dump in the County? [insert sound of cuckoo clock here] Again, where is the outrage? If you get your water from the Patuxent River, are you happy about this? Isn't it time to start electing candidates who are serious about the environment, and who aren't beholden to PEPCO and other monopoly utilities?
Posted by Robert Dyer at 10:25 PM No comments:

Martin O'Malley has broken another campaign promise and Bill Bronrott has failed to challenge him. The Martin O'Malley administration announced today the postponement of any effort to build the Purple Line until 2008. Instead of condemning Governor O'Malley's abdication of leadership, our delegate William Bronrott said it's not so bad and maybe we'll even get more Federal funds.

Leadership. Leadership is a vital quality in solving our transportation crisis. Unfortunately, we don't have it in Annapolis right now. Considering that it will take several years to build the Purple Line after all of the preliminary studies, court battles, and legislative squabbles are complete, we don't have a year to wait. Where is the outrage? I know there is outrage among the voters who believed O'Malley, Bronrott, et al when they said they were committed to the Purple Line. But where is the outrage from the various organizations, activists, and politicians who back the light rail from Bethesda to New Carrollton?

During the campaign, I made very clear that transportation was my top priority. As you can hear for yourself on the video interview posted on my website, I stated that my first action in Annapolis would be to introduce my comprehensive transportation plan. And that the first step was to begin work on the Purple Line. The people who voted for my opponents have certainly learned too late that our Democratic delegates simply are not committed to the Purple Line. If they were, they would be scolding Governor O'Malley for dropping the ball on transportation. And then they actually start doing something. It's a foreign concept: taking action.

Unlike our current elected officials, I am still working to promote and build the Purple Line. In my transportation plan, we will have a world-class railway that exceeds any other version. A bigger and better Purple Line that will serve the needs of Montgomery County in the 21st century. Our current government is lost in the fog of the 1960s. Let's help them to the door in 2010 by voting for real leadership and candidates who keep their promises.
Posted by Robert Dyer at 9:50 PM No comments: