The latest assault on Ocean City is now coming from a wind power corporation and its allies in Annapolis. Just this year, developers and their elected buddies slated the historic Trimper's amusement park for destruction in favor of "mixed use development." While those of us who realize that Trimper's is essential to the historic inlet area of Ocean City are fighting that proposal, now a second front has opened: an oceanfront, to be precise.

Hopefully you are sitting down at the moment. A New Jersey company, arm in arm with paid-off government officials, is attempting to ram through a wind farm directly off the coast of Ocean City. They did this in Delaware. They successfully pulled off a scam here in Maryland to have an environmentally-damaging wind farm constructed in Western Maryland, thanks to their campaign donations to members of the General Assembly. Now they want to destroy the natural view and environment of our classic seashore. Ladies and gentlemen, the line must be drawn here.

Understand the implication of this wind farm: It is absolutely going to be visible from the shore. It is hideous and manmade. It is going to severely harm birds and aquatic life. It must be stopped. The time is now to start writing your elected officials and letters to the editor. Wind farms off the coast are a no go, much like drilling.

~
Now, of course, don't count on being heard in the Washington Post or Gazette. First of all, you should know that the Washington Post - without informing its readers - has some financial interest in oil. It will be interesting to find out what the Post's position is on this wind farm proposal. What's their connection to oil? We don't know. But here's what we do know: they constantly criticize Venezuelan President Hugo Chavez, a rival oil producer and U.S. supplier. And most shockingly, the Post endorsed drilling for oil near the entrance to the Chesapeake Bay and off the coast of Ocean City!!! This from the supposed environmentalist Washington Post.

Need more evidence of the Post's unethical reporting? They have still refused to print the truth about new delegate Bill Frick, that his law firm is a major lobbyist on Capitol Hill for the gaming industry. This, of course, when we are about to vote on slots in Maryland. It is shameful reporting, unethical, and there is no excuse; they are aware of the conflict of interest and have willingly chosen to protect Mr. Frick and his Democratic colleagues.

Not enough? The Post also refused to tell the public about the laughable appointment of the Purple Line Advisory Group by the Planning Board. Apparently, critics of developers and the Planning Board needed not apply - I was not named to the Group. Here is the statement I released following the approval of the small list chosen by staff, not the Planning Board:

"As a citizen who volunteered to serve on the Purple Line Functional Master Plan Advisory Group, I am disappointed in the process by which the members were chosen by the staff of the Montgomery County Planning Board.

The Planning Board staff has done nothing more than assemble the usual suspects, rather than having fresh faces review an increasingly stale debate. This looks like a list of people who should be testifying before the Advisory Group, not sitting on it. It primarily includes individuals who have already taken a position for or against a specific alignment, and equipment, for the Purple Line project. Mier Wolf's town of Chevy Chase is spending $250,000 to stop the Purple Line. Developers and business interests on the list, by contrast, will benefit from the Purple Line. My impression was that this commission was to be made up of average citizens, to assist in reaching a compromise that would benefit the entire community. It is difficult to imagine how this particular panel will be able to reach an objective consensus.

My letter of interest highlighted three concerns: cost savings, environmental impact, and disability access. I do not see a single person on the list who reflects comprehensive environmental concerns. Who on this list is going to be focused on ensuring that stations and equipment are fully accessible to riders with disabilities? I also recognize only one person on this list as a Republican, when this should be a bipartisan or nonpartisan effort. Apparently, these were not concerns of planning staff.

Finally, I question why the staff is only presenting these few, out of eighty applicants, to the Board for approval. Staff answers to neither the County Council nor the citizens, and therefore should not be deciding who is appointed to such an important endeavour."

~
In closing, the results are in for that "mixed-use" development: Rockville Town Center has so far been a failure. The restaurants were not upscale. I thought Bobby's Crabcakes was supposed to be the Ruth's Chris of crabcakes. It turned out to be a sandwich shop. Rockville is nothing like Bethesda at night. And there are just a handful of people living in the condos and apartments. Before this scheme spreads any further throughout the county - Royce Hanson admitted this week what I already knew: a secret plan by developers, politicians, and the status quo to build a "Bethesda Row" along 355 from Bethesda to Clarksburg. This is outrageous stuff. The demand is not there. The housing and office spaces are vacant. Stop it. Now. The environment and quality of life will suffer for the financial benefit of the developers. In 2010, vote the developers out of office, and put citizens back in charge of our community. After all, we live here. They don't.
Posted by Robert Dyer at 2:59 PM No comments: 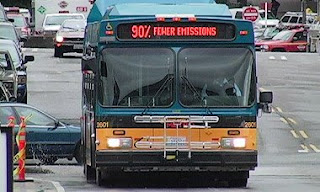 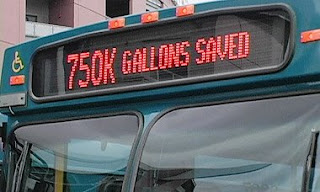 One small step towards finally getting bus service to downtown Bethesda along River Road. This was a major issue in my campaign. It boggles the mind: in a county where politicians claim to support mass transit use, and a cleaner environment, there is no bus to take you from the River Road-area suburbs of Bethesda to the downtown! In other words, by not offering this service, county officials are implicitly advocating automotive travel for 100% of trips to downtown Bethesda.

On the eve of Bethesda's biggest annual event, the Best of Bethesda/Taste of Bethesda, tomorrow, October 6 from 11:00 AM to 4:00 PM, I have taken my message to the top. Montgomery County's cable channel 6 aired a live program in which one could ask questions of County Executive Ike Leggett and County Council President Marilyn Praisner. I managed to get through and made my case for the River Road express bus to downtown Bethesda. Both officials promised to forward this proposal for review, and to determine the potential ridership for the route.

Such a bus would allow residents to avoid the traffic and parking problems in downtown Bethesda. One could simply disembark from the bus and use the Bethesda Circulator to access restaurants, shopping, and all of the other amenities the downtown offers. Senior citizens, and minors who can't drive, would finally have a one stop service to downtown Bethesda.

Best of all, the environment would be cleaner. This would be an excellent route to use a natural gas, hybrid, or hydrogen-powered bus. We have to make the commitment to a cleaner environment and this is a tangible and easy way to accomplish this. I would hope that, eventually, the route could officially be an "Express Bus," using not only an environmentally-friendly vehicle, but also the new technology that would enable it to change lights to green as it approaches each intersection. It can be done. So write to the County Executive and Council, and tell them you want bus service to downtown Bethesda on River Road.
Posted by Robert Dyer at 1:14 PM No comments: 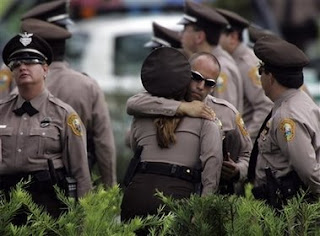 I've been the only one following the 2006-2007 crime wave, and the only one who warned that we needed to give police officers the tools to compete in this new age.
The latest reports are coming in, and sadly, once again I am thoroughly vindicated. I wish that the policies promoted by Delegates Bronrott, Goldwater, and Lee; Senator Frosh; and Governor O'Malley had not resulted in a continued crime wave. But examine the reports, and ask yourself: who do you trust? Certainly not Bronrott, Lee, Frosh, O'Malley, and their allies in Annapolis.
Here are the headlines:
Time magazine: A Surge in Cop Killings
"[T]he nation's police officers...are being targeted and killed in greater numbers than at any time in recent years."
"Police officers killed in the line of duty surged to the highest midyear count in nearly three decades...up nearly 60% over last year."
"You have to come to the conclusion that some of these heinous criminals just don't care. Earlier in our history there was a code of some sense of respect, even among the most heinous criminals, that you would never harm a police officer, certainly never kill a police officer." - National Law Enforcement Officers Memorial Fund President Craig Floyd
"Miami Police Chief John Timoney's answer to the emboldened attacks on his colleagues is to give them matching firepower...AR 15s, a military-grade assault weapon. "Cops understandably feel they are outgunned," Timoney says. "Nine, ten months ago we looked at what can we do to give the officers a fair chance." "
Hmm... "Nine, ten months ago," I was running for office and advocating "matching firepower." My opponents had no comment on our crime wave.
What crime wave, you say? You haven't been reading the papers.
From The Gazette's latest edition:
"[H]ome invasions...have been concentrated mostly in the Bethesda and Potomac areas, according to police."
‘‘'It seems like every time we have a home invasion — except one time in the Fourth District,” said Cpl. Jimmy Robinson, a police spokesman, ‘‘it is usually in the Bethesda or Potomac area.'”
"There were 22 residential burglaries in the Second District between Aug. 14 and Sept. 12, police records showed."

Failed leadership on crime, in the wealthiest state in America.
Photo: Carl Juste/AP
Posted by Robert Dyer at 8:39 PM No comments:

Email ThisBlogThis!Share to TwitterShare to FacebookShare to Pinterest
Goldwatergate is a now a runaway train. Outrage is bipartisan here in District 16, and if anything, the Democrats are even more furious. No one had any clue that Bill Frick would prevail over Reggie Oldak or Don Mooers. Just listen to what one Democrat, calling him or herself "bitter in bethesda" had to say on the progressive blog, Free State Politics, the day after the Frick appointment:

"...the selection of Bill Frick in District 16 was the result of a coordinated effort both within and without the Central Committee, an effort which made not even the slightest nod towards the interests of the voters of District 16."

"Bill Frick, a young (32) activist with an appealing personality but a thin resume."

"Does anyone believe that, in a contest before the voters of District 16, that Bill Frick would have stood a chance against Mooers, Oldak, or any of the other candidates? The answer is no, not a chance."

"Not to mention the utter contempt shown for the voters of District 16, 99% of whom probably don't even know who Bill Frick is."

"[T]he Central Committee was motivated by an unknown agenda and picked a clearly inferior candidate."

"Was the District 16 fiasco orchestrated or motivated by outside forces?"

Sure, you'll find a few apologist Democrats who'll tell you Frick was superqualified and a real swell guy, and why-don't-you-pretend-this-didn't-happen-keep-quiet-about-slot-machines-slot-lobbying-Akin-Gump-Miller-Leggett-O'Malley-and-get-back-on-the-bandwagon. But the majority opinions are certainly more entertaining.
Posted by Robert Dyer at 3:02 PM No comments: