Once again I am vindicated. You may remember I predicted that Marilyn Goldwater would be unable to serve if reelected, and that we would end up with only 2 votes in Annapolis for District 16. And that came to pass. Now another issue I warned about, violent crime - and its relation to the safety of law enforcement personnel - is in the headlines.

Yesterday's USA Today reported that - surprise - violent crime is increasing. And the number of police officers killed in the line of duty has increased as well. During my campaign last year, I made crime a major issue; my Democratic opponents were silent on crime. Not surprising, considering that Bronrott, Lee, Goldwater, and Frosh have done nothing to reduce crime, but have, in fact, made life easier for criminals. They have frozen the death penalty, given felons the right to vote, and then tried to release mass numbers of them from state prison so they could vote. I wonder who they'll vote for?

Last year, I warned of the increase of violent crime in our community. And advocated providing better weaponry and body armor to our county police, state troopers, and Park Police. You can read it under "More issues" on my website http://www.robertdyer.net/ I wish I had been wrong in my prediction, but here is what yesterday's report said:

"A surge in fatal shootings has contributed to a dramatic increase in deaths of law enforcement officers during the first six months of this year, the highest midyear body count in nearly three decades."

"The annual count by the National Law Enforcement Officers Memorial Fund found that 39 officers were killed in shootings, up from 27 during the first six months of last year."

"These are the most alarming increases in officer fatalities I've ever seen for a midyear period," said Craig Floyd, the memorial fund's chairman and chief executive officer. "It's somewhat shocking. Is there something at work that nobody has gotten their arms around?" he said.

"Floyd and other law enforcement analysts said that recent spikes in violent crime across the country may be a factor in the rising shooting deaths this year."

"This is very consistent with the increasing crime in many American cities," said Joseph Carter, president of the Inter-national Association of Chiefs of Police. "This should be a wake-up call for the whole country."

"There certainly could be a relationship to the increases in violent crime," Charlotte-Mecklenburg Police Chief Darrel Stephens said.

"Clearly, if you have more violent crime, there is a greater threat against law enforcement. One naturally follows the other," said Floyd, who called on local police agencies to provide additional resources, including upgraded weaponry and body armor.

Clearly, it is time for new leadership in Annapolis.
Posted by Robert Dyer at 2:47 PM No comments: 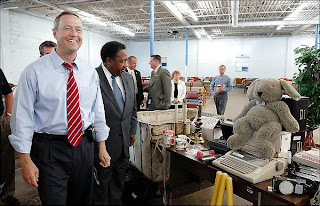 In preparation for the devastating effects of the Bronrott-Lee-Frosh-O'Malley tax increases, Governor Martin O'Malley has welcomed Maryland residents to shop at a state-run store. Here, the poor and working families can purchase surplus and used goods left over from the state government. Can't pay your rent anymore, and you've lost your high-speed internet? Bang out a quick note to your landlord on that nifty 1950 typewriter. But true to the new Jimmy Carter spirit of sacrifice, pain, and taxpayer repentence in Annapolis, even the state store is going to close soon! So hurry in, and do some holiday shopping Peter Franchot-style. "Wait a minute, Peter, I'm the governor!" "No, I am." "Just because you have power equal to me, doesn't mean you're the governor." "Yes it does, Martin."

You can take action to stop developer excess in Ocean City, MD. As previously reported, the historic Trimper's amusement park is being targeted by developers who want to turn it into a mixed-use condo-retail development. Maryland's outrageous state and county property taxes are one of the forces being used to help Democrats' developer buddies in their land grabs. The same thing is happening here in Montgomery County, and apparently at the historic park at Coney Island, NY. Now you can take action as Trimper's supporters have set up a website to coordinate efforts to save the park:

http://www.savetrimpers.com/
Posted by Robert Dyer at 2:27 PM No comments:

Montgomery County, the state of Maryland, and the U.S. continue to fall behind the rest of the world in rail transportation. Consider these new advances in European rail service reported by the Associated Press recently:

"People can go anywhere on the network and get there more quickly than air. We do believe people will choose to make those journey because it's more environmentally friendly," said Eurostar Chief Executive Richard Brown.

" In November this year, Eurostar trains in Britain will speed up to 208 miles per hour (335 kilometers per hour) as a faster line is laid."

Find out more about the future of rail transportation using the following link, and ask your elected officials why they continue to delay the future here on our side of the Atlantic.

http://www.railteam.eu/en/
Posted by Robert Dyer at 2:38 PM No comments: