According to Democrats in Annapolis, $11.30 is a "living wage." Ok, enough chuckling. I'm serious, and apparently so are Governor O'Malley, and his partners, Bronrott, Lee, Goldwater, and Frosh. They have rammed through a bill, now law, that mandates a wage of $11.30 for contract employees of the state in Montgomery County. If you've tried living on $11.30 in Montgomery County, you know that's not a living wage. $15.30 wouldn't be a living wage here. As with so many Orwellian doublespeak policies of these politicians, my response is "put your money where your mouth is." First of all, admit $11.30 is not a living wage. If I were in office, I'd say, give me a bill that calls $20.30 a living wage, and now you're talking. Don't mock poor people by calling $11.30 cents a living wage. They ought to be ashamed of themselves. As part two of "put your money where your mouth is" on the living wage, I challenge O'Malley, Bronrott, Lee, Goldwater, and Frosh - and O'Malley fan Hillary Clinton - to do just that. Let's make it law that the Governor, Delegates, State Senators, and U.S. Congress be paid only $11.30 per hour from now on. And they will have to cover all of their expenses, housing, and children's college education with that $11.30. I'll buy that for a dollar.
Posted by Robert Dyer at 3:21 PM No comments:

This time in Ocean City, MD. Rumor has it that Trimper's Amusement Park at the inlet may go up for sale. Sources indicate that the powers-that-be want to replace amusements with, what else, a Bethesda Row-style "multi-use" commercial-residential development. Don't let it happen. Much like our Montgomery County government's demolition of the former B&O Railroad line, this is a greed-fueled, shameful assault on history, a historic site that should be preserved. Will the governor and Eastern Shore delegation step in to prevent catastrophic change in the character of Maryland's historic tourist destination? Or are they too heavily in debt to the developers to move? The Esskay clock is ticking. As in the case of the Westbard Sector, citizen action is needed to fill the vacuum of "leadership."
Posted by Robert Dyer at 2:07 PM No comments: 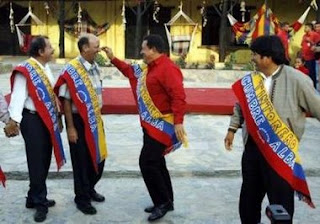 Yes, it has been awhile between entries. My apologies for the delay, but a family medical emergency and other assorted events have left no spare time over the last month.

New entries are on the way. Until then, enjoy the recent news that the Washington Post empire's earnings have plummeted again. Translation: Less and less people care what the Post has to say. People are tired of far-left, biased yellow journalism and a dark agenda that is simply contrary to the values of our community. In greater numbers, people of every race and income level are confirming the irrelevance of the dinosaur Washington Post.

The Post's nemesis, Hugo Chavez, the world leader who strikes the most fear into the hearts of the Post's corporate bigshots and editorial staff, is enjoying the news too (as evidenced in the above photo). If you're scaring the Post, you must be doing something right.
The long cold winter has passed and the stormy seas are behind. At any moment, someone might shout, "Land Ho!" Are we ready? What are the policies and agenda that will bring us to victory when we land? Stay tuned for discussion of that. And of the Democrats' nationwide strategy to drive the middle class into poverty through rush-hour tolls and transit fares (when they know you must go to work at that time - that's why they're doing it, as a guaranteed revenue scheme), Lexus lanes, energy taxes, carbon taxes, car taxes, property taxes, real estate taxes, sales taxes, service taxes, more taxes than can be listed here. And this is after Maryland Catholic leaders gave the legislature a failing grade on poverty issues in 2007. The middle class will have no spending money, and the poor will be devastated. Don't let it happen! Support a positive agenda, and get ready to vote in 2008 and 2010!
Posted by Robert Dyer at 10:32 PM No comments: