CAPITAL PROPERTIES'
INSIDE GAME HAS
BEGUN
Richard Cohen Searching for
Allies to Back Massive, Urban
Redevelopment in Westbard Sector
Friendship Heights Cannot Speak for
Westbard Sector Neighbors
Those who have followed some of the development debacles such as Fallsgrove and Twinbrook know how the game works. One of the first steps developers take, when they are pressing for an unpopular redevelopment, is to win over some token allies in the neighborhood. So be prepared for that as we inch slowly but surely toward zero hour on Westbard. It has been said that Capitol Properties' Richard Cohen has attempted to make contact with a member of the Friendship Heights Committee regarding his plan vs. an alternative plan put forward by that committee.

Now let me stop right here. It must be said that, first of all, the Friendship Heights Committee does not speak for those who live in the communities bordering the Westbard Sector. Although it has been working on this and other issues, it is not an official body which can represent individual civic associations. It is our Springfield neighborhood, as well as Westbard Mews, Kenwood Place Condominiums, Westwood Tower, Park Bethesda, Kenwood and Sumner residents who must have the final say on anything that happens in the Westbard Sector.

Second, so far the aforementioned actual neighbors of Westbard have yet to see the Cohen plan. He has shown it once to the Friendship Heights committee, and now is reaching out to that committee again. The problem with this is that he is talking to the wrong people, and making a terrible blunder diplomatically and economically. Things would go much easier if Capital Properties would come to us, the residents, and show us the plan. To play the devil's advocate, for the sake of argument, why not design a spectacular and unique Westbard Sector concept that will excite the imagination and build genuine support in the neighborhood?

Instead, we are only hearing about a plan. And the rumors sound like a concept that is not only too big, but the same tired, old, mixed-use brick buildings. Dead on arrival.

Third, we haven't been allowed to examine the Friendship Heights Committee's alternative plan yet. Furthermore, we have not signed off on that plan and it should in no way be a starting point for any negotiations. For example, I am hearing about the alternative plan having 4-story buildings. Depending where on Westbard that would be, I and many others would oppose that. We certainly don't want a four-story Westwood Shopping Center. What we do want is improved amenities, and at least one sit-down, upscale family restaurant. And Giant should offer in-store dining like Harris Teeter and Wegman's, and further expand its selection. For example, why can't they sell Zatarain's or Phillips Seafood frozen dinners, or Hungry Man Heroes frozen sandwiches? But other than that and the horrible new logo that destroyed the venerable Giant brand, why would we redevelop a grocery store that just remodeled?

Finally, Mr. Cohen is wasting his time and energy communicating only with a committee that, by name, represents a community several miles away which will be entirely unaffected by the Westbard Sector redevelopment. Our County Council and Dr. Yes and the Planning Board should stop being wined and dined by the Capital Properties Bethesda-based lobbying firm, and start engaging the Westbard Sector Plan and the surrounding neighborhoods. They'd like to win allies among us - and they doubtless will find a handful of nouveau-riche residents who find our venerable Westbard simply inadequate for their champagne wishes and caviar dreams. But they'd better worry about winning a majority of us over.

Can CP design a fabulous new Westbard Sector that is a neighborhood amenity, and not a regional destination and miniature city? Can they accept the reality that, unless a rail line is extended to the area, only 15% of the residents use public transportation? Or will they go ahead with 12-story buildings and thousands of new cars in the neighborhood?

We won't know until they come and talk to us, and let us in on the plans.
Posted by Robert Dyer at 6:31 AM No comments:

PALIN REPORT
IS
DEMOCRAT HOGWASH
Political Investigation Reveals Nothing,
Yet Still Promoted By Democrats and
Liberal Media
The results are in, and... we already knew what the results were: the same old hogwash we were told about by CNN, MSNBC, The New York Times, The Washington Post, etc.

Journalism ethics are being violated as I speak, as these same outlets are promoting the "Palin Report" as a damaging indictment that is "stinging" Sarah Palin. This is total hogwash.

The report draws an incoherent conclusion from the facts we all know. Contrary to the report, which claims ethics laws were violated, the facts tell another story.

No one was improperly fired - and the report admits that! But it attempts to absolve a state trooper of absurd behavior that embarrassed his colleagues, and would have put him behind bars under Maryland law.

Do you know what CNN, the Obama campaign, and the rest of that gang are defending?

Those Democrats and media are defending the state trooper's right to Taser a 10-year-old boy. That's right, they are saying Gov. Palin was wrong to want a man who Tasered a child off the force. That's change we can believe in?

Well, we knew Democrats were weak on crime, but this is a new low.

So, remember each time you hear about the "Palin Report" or "Troopergate" as "damaging" to Sarah Palin, that the liberal speaking is implicitly endorsing the Tasering of children, and defending the use of violent threats against government officials and their families. Is that Change you can believe in?

And remember that Democratic Governor Martin O'Malley had a Maryland man jailed for making similar threats to those made by the Alaska trooper against Governor Palin. Can you say, "double standard?"

It's too late for this kind of garbage, and it only serves to further energize the Republican base and women of all parties to vote for Sarah Palin on November 4. In that respect, this report will be remembered as one of several catastrophic backfires that occurred when Democrats and the media tried to use every dirty trick in the book to discredit Gov. Palin. Their fear is palpable, as Gov. Palin's inspiring example has indeed "changed the game" for not only the campaign, but for young women across the country and around the world.

The "Palin Report" is as credible as the Colbert Report, and the beeping you hear is the trash truck backing up to pick up both.
Posted by Robert Dyer at 9:18 AM No comments: 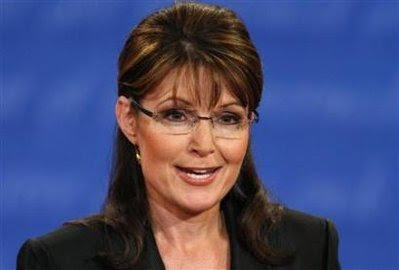 Alaska Governor is the
Next "Great Communicator"

Last night was another tour de force by Sarah Palin. Once again, liberal pundits were left speechless. A few outlets refer to "shaky" moments, but I don't know what debate they were watching. Gov. Palin was in charge from start to finish, and scored the only direct hits in the debate. On PBS, the talking heads quickly changed the subject to John McCain and the Wall Street socialist bailout bill.

The liberal media, Saturday Night Live, and phantom feminists will have to continue to chew nails. Gov. Palin showed young women that you can have it all: an extraordinary career, be a powerful leader and a supermom all at once... etc., etc.

But the most remarkable thing is her speaking ability, that is so reminiscent of Ronald Reagan. Only she is entirely her own person.

Aghast Democrats are asking: What happened?! Where was the Gov. Palin from the interviews?

I'm afraid those people were expecting, for one, a "gotcha" debate on trivia such as that conducted by a mediocre journalist in recent weeks.

But they also fell for a set up, I suspect. I remember Japanese baseball phenom Ichiro having a terrible first spring training when he came over to the States. Then he smashed the ball to shreds once the season started. When asked what happened, Ichiro said that he intentionally played poorly during spring training to fake out the media and set the bar low.

Sound familiar? Now that you've seen the real Sarah Palin again, it's up to John McCain to deliver the knockout blows in these last two debates. It's too bad Gov. Palin can't debate Barack Obama, because this election would be in the bag.
Posted by Robert Dyer at 6:06 AM No comments: