Prima to open in May; the future of Kapnos Kouzina at Bethesda Row 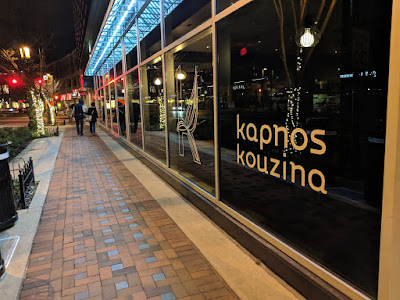 Prima, an upscale fast-casual Italian concept from Boston celebrity chef Michael Schlow, is now scheduled to open next month at Bethesda Row. Construction has been underway for several months at the former location of Taylor Gourmet at 7280 Woodmont Avenue.

Less certain is the future of the vacant neighboring space that was home to Kapnos Kouzina, the very successful modern Greek restaurant from another celebrity chef, Mike Isabella. Shuttered after Isabella was caught up in a #MeToo scandal involving several of his restaurants, the rumor had been that Isabella's former business partner would try to revive the Bethesda restaurant under a different name.

But the latest rumor I've heard is that Schlow himself might be the celebrity chef to solve the Kapnos crisis. A source tells me Schlow may open a new outpost of his D.C. restaurant The Riggsby in the Kapnos space at Bethesda Row. There's precedence for this, as Schlow has operated other side-by-side restaurants elsewhere. However, a publicist for Schlow's restaurant group says she is aware of no plans for The Riggsby at Bethesda Row at this time.

The Riggsby at 1731 New Hampshire Avenue is a retro-American concept "with a flash of old-school Continental," as the Michael Schlow Restaurant Group describes it. Stay tuned.
Posted by Robert Dyer at 5:00 AM

Kapnos Kouzina was the best restaurant in Bethesda - hope they reopen in some form.

I sure hope they remove that dark tinted film on the glass. Kapnos never looked busy from the outside, even if it was packed inside. A terrible choice for a restaurant. Even at night, the tinted glass made it very hard to see into the restaurant.

I see that the designer was trying to match the color of the Equinox glass above, but transparency is very important in restaurant and retail design. More outdoor dining would also be helpful to advertise their presence in the base of a sleek glass building.

I hope the new restaurant doesn't have Schlow service.

Can't wait to take my first flight in Westfield Montgomery Mall simulator. With the craft being a 737 (hopefully a Max version) I will dive boom it into the CinnaBon. KAABOOM!!

From the Mueller Report:

The term “troll” refers to internet users—in this context, paid operatives—who post inflammatory or otherwise disruptive content on social media or other websites.

Absolutely. The dark film is not inviting.

The film is so dark and the signs are still up, I'm wouldn't be surprised if some folks had no idea it closed.

12:11 PM is falsely claiming to be breaking scoops at the mall again..lol

It's the mall- get some perspective on your life. Get out of the food court.

Wow, that was fast.