WHERE TO CELEBRATE MEXICAN INDEPENDENCE DAY IN BETHESDA - ¡VIVA MEXICO!

Sunday, September 16th is Mexican Independence Day.  Why not celebrate at one of downtown Bethesda's Mexican restaurants? 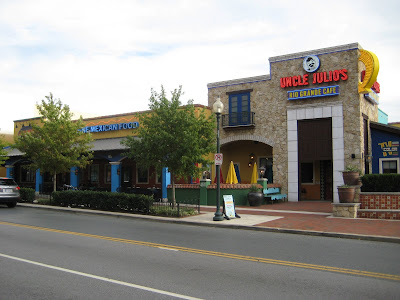 Uncle Julio's, at the corner of Arlington Road and Bethesda Avenue, is a Bethesda Row favorite.  Their beverages - alcoholic and non-alcoholic - are standouts on the menu, especially their Swirls.
Ascend to the open-air rooftop patio for specials and perfect weather Sunday at Tia Queta, at 4839 Del Ray Ave.

Guapo's may be the most popular Mexican restaurant in downtown Bethesda.  8130 Wisconsin Avenue.

What is Mexican Independence Day?  It started with Father Hidalgo's Grito de Dolores on September 16, 1810.   At 11:00 tonight, the Mexican president will ring a bell, and address a crowd in the Mexico City public square, concluding with a triple "¡Viva Mexico!"

Join them in spirit, tonight or Sunday, at one of the many Mexican restaurants in downtown Bethesda!
Posted by Robert Dyer at 10:00 AM

Email ThisBlogThis!Share to TwitterShare to FacebookShare to Pinterest
Labels: 2012, Bethesda, downtown, Mexican Independence Day, specials, when is, where to celebrate