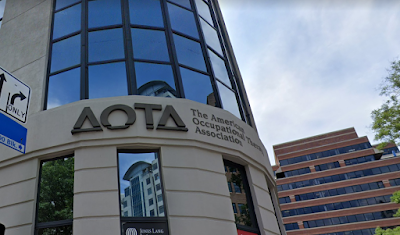 The American Occupational Therapy Association has sold its Bethesda headquarters at 4720 Montgomery Lane to Washington Property Company. AOTA announced its intention to sell the building last year, stating at the time it planned to complete a sale by the end of 2020. The deal went through October 2, 2019, according to Maryland real estate records.

A shell company, Hampden Lane Project, LLC, is the official purchaser. The sale price was $22 million. WPC is now in the catbird seat. It can redevelop the AOTA site. It can assemble the AOTA property with the WPC headquarters building directly adjacent to it. It can assemble both of those properties with the Douglas Development property (former Pines of Rome/Tommy Joe's buildings) that is contiguous with the AOTA and WPC properties. Or it can assemble all three of those with the former Exxon station property that adjoins the Douglas property to the east, and redevelop the entire block.
Redeveloping the entire block would create a site large enough to provide room for a mainstream cineplex, desperately needed to support local restaurants damaged by the demolition of the Regal Cinemas Bethesda a few years ago. It must be noted that the Exxon property is currently expected to be redeveloped as senior housing. In any case, there are a number of options to assemble a winning project on two or more of these properties.

AOTA announced earlier this year that it had already found a new headquarters. They will be moving to 6116 Executive Boulevard in North Bethesda.
Posted by Robert Dyer at 5:00 AM

Looking forward to it. LOL

My comment was intended to highlight his poor choice of words. Only a “winning project”, defined by Dyer would somehow include an urban cinema, even if the market and economics do not make such a cinema possible.

In fact if an urban cinema was somehow forced onto this site, it might end up like the failed food court, and be more defined as a “losing project”, with awkward, expensive and likely vacant space in the heart of downtown,