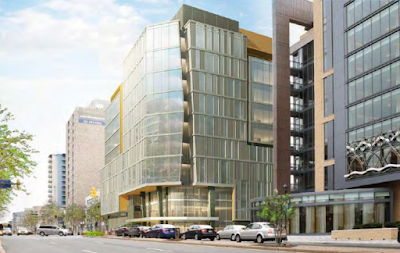 The most unique project to come before the Montgomery County Planning Board under the new Bethesda Downtown Plan so far is 8280 Wisconsin Avenue, a joint venture by developers Donohoe and StonebridgeCarras, both of whom have been major players in the post-recession real estate market in downtown Bethesda. 8280 Wisconsin was previously envisioned as an office building, but now is being positioned as a mix of office and research/laboratory uses. While much of that use is currently located in the I-270 biotech corridor, this is a prime site near NIH, the National Library of Medicine and Walter Reed National Military Medical Center. 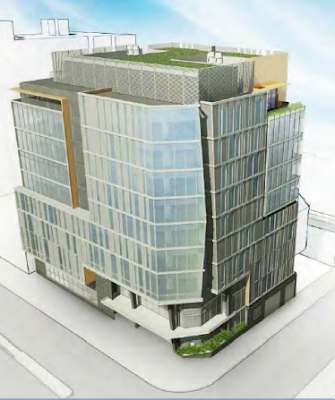 Doug Firstenberg, Principal with StonebridgeCarras, calls downtown Bethesda an "untapped" market for such uses near those world-renowned medical institutions. Bethesda-based Donohoe's CEO Chris Bruch promises a "premier life sciences building," with 185000 SF of space in total, according to the staff report. 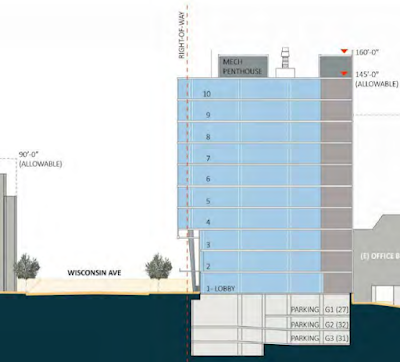 Ewing Cole is the architecture firm for the project, and the facade treatment is certainly refreshingly different from some of the cookie cutter, cantilevered designs of late. There is a jagged tear that cuts through the glass facade from the roofline to the tall windows at the bottom of the 14-story building. The upper floors jut out a notch from the lower story at point, an intrusion into the Wisconsin Avenue right-of-way that planners and the Design Advisory Panel have both complained about. However, staff is suggesting delaying that discussion until the site plan phase of the project. 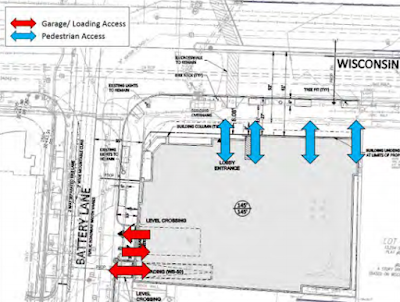 The board will take up the project at its July 12 meeting. Staff is recommending approval of the sketch plan, with conditions.
Posted by Robert Dyer at 5:00 AM

Did you write this yourself?

"...planners and the Design Advisory Panel have both complained about."

Great design. Looking forward to it!

I like this design quite a bit. I think the notch in the corner facing the medical center is almost like a surgical slice of the facade, somehow appropriate in the medical and biotech field. It has a nice edgy appearance, and not just a stack of boxes. The devil will be in the details though, as subtle plane changes and shallow angles can be difficult to construct in an elegant and refined fashion. Very easy to make this subtle detail look ham-fisted. I think Ewing Cole will be up to the challenge.

The DAP needs to look at each submitted project individually, and not dismiss an idea, like a cantilever, just because another project proposes a similar concept. Cantilevers can provide desireable covered and protected pedestrian walkways, maximize density and help reduce boring shear walls by creating a defined and articulated base. Cantilevered wall planes and floors can create a dynamic and iconic profile, and can be a nice contrast to so many of Bethesda’s boring precast and glass boxes.

I hope this type of edgy design is a model for more buildings with creative and artful design ideas. Yes SOM, I’m looking at you...

7:06: Classic Saul Alinsky - it's described as 14 stories tall repeatedly in staff and news reports. Maybe they've changed it. Maybe they're measuring it differently. Who cares, Saul? Nobody cares.

When Dyer does it, it's "cross-examination".

When Dyer has it done to him, it's "Classic Saul Alinsky...nobody cares."

On Image #2 of 4 that Dyer posted with this article, the floor numbers clearly stop at "10". Perhaps Dyer read "140 feet" and confused that with "14 stories".

Who cares? What the heck is wrong with you? Don’t you profess to report on new upcoming Bethesda projects and their accurate description, density and height? You report that a 14 story building is coming, but show images that clearly show a 10 story building. Count the levels on the freaking rendering. Why do you jump down the throat of a reader who asks a question that could impact their understanding of the proposed height? Four stories is about 50’of height, quite an impact if you live nearby, like maybe, across the street at the Flats 8300. You could have simply stated that their appears to be a discrepancy between the owners presentation, and their renderings. But no, you get all pissy on someone that had a valid observation. Stating that “Nobody cares” is a disrespectful comment on your part.

3:53: You are the troll, not a "reader." You posted the comment, as you have in the past whenever there is any small point to jump on and go crazy about. As you note in your unhinged rant, there is indeed a "freaking rendering" right there showing an apparent 10 story building. I recall posting a lower height for another project, and you went equally crazy stating it was now taller than the originally-planned height. If people are going to change their building height midstream and not give consistent figures across all materials, sure, that is going to lead to errors in media reports. I, in fact, triple checked with other media articles about the project, and saw the 14-story citation despite the rendering showing only 10.

Instead of "checking with other media articles", why not just contact the developer and ask them about the discrepancy?

7:51: You do realize only a nutjob or paid troll is spending their July 4 holiday going nuts about a building height that no one cares about? Reveal your identity.

Hope they'll be able to keep the sidewalk on Wisconsin open for the duration of the project, because there is no crosswalk on the north side of that intersection.

OK, I will reveal a hypothetical identity. Suppose I was about to rent an apartment on the south side of Flats 8300, and because of an erroneous report (that was repeated by you) I decided to lease an nice penthouse for 2 years, assuming that I would look at the upper part of a new office tower. Low and behold, the report was wrong and now I get to overlook the mechical penthouse of a new 10 story biomedical building, where I can sit on my expensive balcony and breath in some nice bio-medical exhaust fumes. Of course this is hypothetical, but as a so called reporter of facts, you and others should no be glib about the facts. You saw the 10 story building section, the 10 story renderings, but reported a 14 story tower, because you “tripled checked this with other media outlets”, even if they were wrong. Perhaps you could have simple reported that there appears to be a discrepancy, but this is what we know so for. You seem to think everyone is trolling to piss you off. I just wanted the facts.

5:04: You're already breathing in biomedical exhaust fumes from NIH on your hypothetical balcony.

Currently the nearest source of "biomedical exhaust fumes" is at least 1,000 feet away from 8300. There is a huge difference between that and right across the street.

Fixed it for you, Dyer.