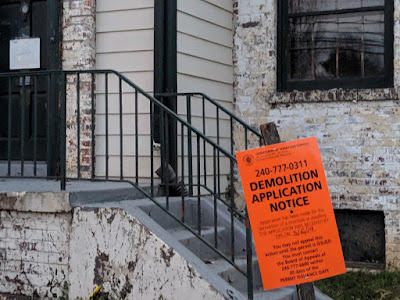 Preparations are being made for the demolition of homes and buildings on the site of the future ZOM Bethesda apartments in the 7500 block of Arlington Road. Demolition permits have been requested from Montgomery County. State Farm agent Jeffrey Conley has already relocated his prominent Arlington Road office to 7801 Norfolk Avenue, in Suite 115. 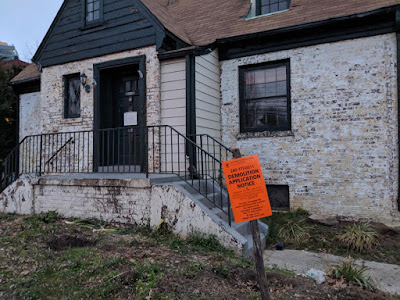 This is just the beginning. Developer ZOM says you will soon see safety fencing erected around the perimeter of the site. Utilities will then be disconnected. Finally, demolition will begin in early April, and ZOM hopes to begin excavation later that month, weather permitting. 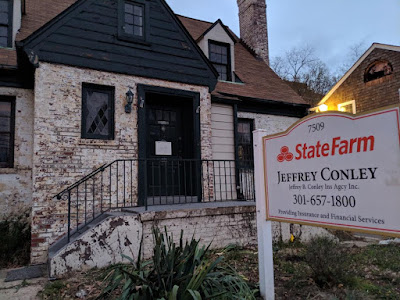 This will be a radical transformation of Arlington Road. But having said that, this is about as good as it gets as far as transit-oriented development - the building will be a five-minute walk from the Bethesda Metro station. If anything, the interior side of the building should have been taller, as there are limited sites this close to Metro. Instead, the County is shuffling those lost units to non-TOD areas like Westbard, that are not near Metro stations and the County services needed by lower-income residents of MPDUs. This is generating greater auto emissions, and is the key reason why the Planning Board intentionally broke County law and did not measure the greenhouse gas impact of the Westbard sector plan. 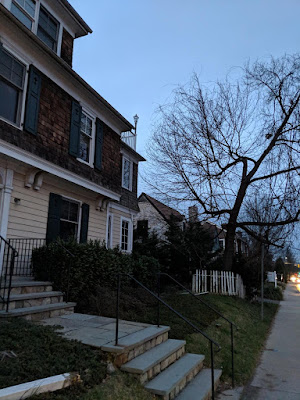 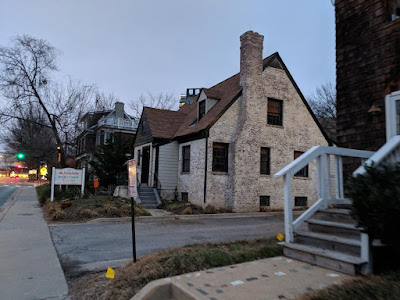 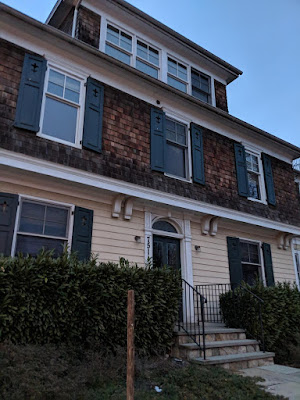 The cedar sided building was my dads office since 1996 when we bought and renovated it. Was a great space. My friend and I where there until 7 am Monday morning stripping hardware. We took all the old doors for reuse and a lot of the nice plants. Really and end of an era with these old Bethesda houses being torn down. We moved to an 1890s building on Route 28 in Rockville.

Oh and that front window is going into my house. And I even took the old basement coal delivery door!

You can blame the NIMBYs of Edgemoor for the ridiculously low building heights there.

What "County services" will be less accessible future MPDU residents living in Westbard?

Looking forward to this project, and the Edgemont II project in the same block. Nice to see some density in this area. Those former houses, used as offices, created a rather ragged edge along Arlington with their side and rear yards filled with surface parking lots. Sidewalk improvements will be welcome for those walking to the Farmers Market. There roof terraces will have some nice open views to the west, overlooking the large green spaces of Bethesda Elementary School athletic fields.

I think the 5 to 6 story height seems appropriate on Arlington, but agree more height on the east edges would be sensible, closer to the height of the Edgemont I.

7:35: All of them. There are currently no County government services or resources located in the Westbard area.

5:46: Wow, that's great. I didn't even know these houses had coal delivery doors.

I think Robert is somehow implying that residents of MPDU’s that qualify for moderately priced housing because of their income, somehow need additional social support, methadone clinics to treat their drug addictions and clean needles. Very unkind and insensitive of Robert to suggest that these folks need social assistance.

MPDUs aren't Section 8 housing for the destitute. The rents are the same as higher-end market-rate units in similar areas in places like Philadelphia or Baltimore, and residents still need to income qualify.

I think the program is targeting people like recent college grads or small single-parent families who would otherwise find Montgomery County prohibitively expensive.

Robert Dyer, who has never had a job and has never had to pay for his own housing, hates it when working, middle-class people get a break on high housing costs.

7:00: Whoa, not true. MPDU rents are absolutely not "the same as higher-end market rate units in similar areas."

7:58: LOL - I've had many jobs, and owned two businesses. Punch yourself, dumbass.

5:57: Low income residents in Montgomery County indeed need assistance. That's just one reason the County has a structural budget deficit. Flooding the County with low-income residents has been as fiscal disaster, but it was intentionally done by county and federal governments for political ends.

Past tense - what happened to them?

7:19: Nothing - I still own them. Stop overthinking every syllable, you're mentally ill.

"Flooding the County with low-income residents has been as fiscal disaster, but it was intentionally done by county and federal governments for political ends."

The state farm building still has a coal door, might go bust it out if I have time. I these buildings represent old bethesda which is being obliterated by buildings with high density and no character. Oh well. We always kept are building in top shape, same with the dentist and lawyers office on the corner. Unfortunately the guys that owned the state farm building and the residential house on either side of us were pretty cheap and out of the picture most of the time. Everybody stopped putting money into their buildings 5 years ago when the deal started to come together. We even were using portable AC units for part of last summer when the unit from 96 went out!

Does anyone know what is to become of the home on the other side of the christopher near the metro? Last I heard the lady refused to sell for any price. Maybe she is gone.

Anyways thanks for noticing the signs and posting about it. I just hope in the future people will walk down the street and remember. A Lot of residents of the christopher were definitely disappointed they could cut through anymore.