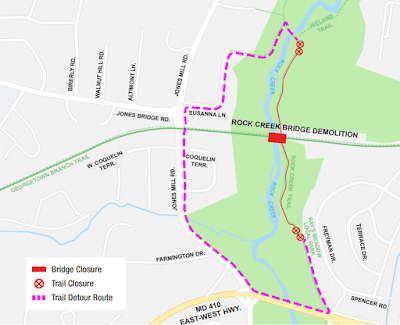 Rock Creek Trail in Chevy Chase will temporarily close between the Ireland Trail head and Ray's Meadow Local Park for about two weeks starting Tuesday, March 26, 2019. The closure is due to the demolition of the Rock Creek Bridge, a Doug Duncan-era replacement for the old Baltimore & Ohio railroad trestle that once carried freight trains over the creek there.

A detour (shown in purple on the map above) will route trail users around the closure. At a later date, Purple Line Partners contractors will construct two new bridges over Rock Creek at this location - one for the two light rail tracks, and one for the Capital Crescent Trail. Once again you can get a sense of how a project of this width would destroy the environment if the Purple Line were extended west of downtown Bethesda to Westbard and Sumner, as the Montgomery County cartel is secretly planning to do behind closed doors.
Posted by Robert Dyer at 5:31 AM

Once again, you fail to point out the benefits of having frequent mass transit light rail access to Westbard and perhaps even beyond. The modest extension of a soon to be existing system iwould be much more affordable than the Phase One.

I’m not sure you know this, but trees are a renewable resource. Imagine all the area residents that could use the Purple and Red lines to access their workplace instead of using their cars. Having enhanced transit access to Westbard and perhaps other areas west and south of Bethesda would be transformative. All the way to Tyson’s would be a game changer for the region. Yes, of course some trees would have to be removed and replanted, and yes, newbridges would need to be built and yes, the trail would need to be separated from the tracks, but in the big picture, many believe that this might be a good idea. At least worth further study. Hey the attorneys that will be employed by all of the Nimby’s have to eat as well...

Maybe try a frequent shuttle bus service once the Purple Line is done to see if there is ridership demand.

By they way, if you keep reporting on the Purple Line Phade Two, it will no longer be secret.

Replacing a bridge = destroying the environment??

"you can get a sense of how a project of this width would destroy the environment."

And now...imagine building all of Dyer's beloved "master plan highways."

6:48: WMATA tried an express bus from Bethesda to Tysons. It failed for lack of demand.

There would be more than some trees removed to extend the Purple Line - there isn't enough width in the topography in many spots south of River Road to fit such a wide project. Considering that the schools are already overcrowded in the Westbard area, and that the Council failed to identify a single new school site in the sector plan process, it's unclear where people are thinking all of the new students from an urbanized Westbard would go.

The entire west Bethesda area is already fully-developed. If you haven't even redeveloped half of downtown Bethesda, why would you already turn to urbanize other areas as sprawl away from Metro? It doesn't make any sense.

7:25: See my above response - much more than a bridge replacement would be needed.

8:07: The rights-of-way for those highways were set aside decades ago.

How does it compare with an extension of Little Falls Parkway from River Road to Clara Barton Parkway, which is one of your "Master Plan Highways"?

9:19: It's not one I've currently proposed, but it is on the original maps and remains under control of the NCPC as a federal highway facility, which is why the NCPC had to sign off on the piece of the park being given to EYA in 2011.

It actually was going to connect to the Palisades Freeway, which was different from the Clara Barton Parkway.

"urbanize other areas as sprawl"

"It actually was going to connect to the Palisades Freeway, which was different from the Clara Barton Parkway."

More magical thinking. How would that somehow reduce the environmental destruction needed to extend Little Falls Parkway south from Massachusetts Avenue to Clara Barton Parkway, George Washington Parkway/Maryland side, Palisades Freeway, Canal Road, or whatever name that road may have?

Infill development near and within a previously developed area, like at Westbard, is not sprawl. Sprawl ONLY refers to development on previously undeveloped land, as a city expands outward. The Westbard shopping center is already (poorly) developed. Perhaps you fell asleep during that Urban Planning class you brag about.

Two light rail tracks and a hiker/biker trail can easily fit in the 100’ wide right of way that formerly contained a heavy freight rail line. The edges may be overgrown, and neighboring residences may have illegally erected fences within the right of way, but most areas should have plenty of room for a western extension of the Purple Line. As others have stated, the grade was engineered for a heavy freight rail line, so light rail would easily fit in with minimal regrading. Yes, new bridges would need to be built to car two tracks and the trail.

"It is the original maps and remains under control of the NCPC as a federal highway facility, which is why the NCPC had to sign off on the piece of the park being given to EYA in 2011."

Little Falls Stream Valley Park is not "a federal highway facility". It is a county park.

1:38: It's a park that has a federal highway facility running through it. You have a hard time with facts. And the fact is, the feds HAD to sign off on the sale of the land via the NCPC. If it was only a "county park," the NCPC would have no jurisdiction.

1:19: Wrong. Sprawl is development away from rapid transit - that's the smart growth movement's own definition they use to trash the suburbanization of America in the 1950s. Shopping centers are necessities. The planned redevelopment is going to suck very badly in practice. Where you can quickly park and go into the stores today, you'll be in a long queue searching for a parking space on the one street up the one ramp of the one small garage.

People are most likely going to go elsewhere, which Regency doesn't care about, because they get their revenue from soaking the tenants via high rents, not from the profits of the tenants.

Even where the CSX right-of-way may be technically a certain width, the single-track rail line was only using a part of that. In many spots, the grading is not uniform across the full width of the technical right-of-way. Two tracks, a median, a trail and fencing would not fit in many spots south of River Road.

“It is better to have less thunder in the mouth
and more lightning in the hand.”

You don't understand what the NCPC is, Dyer.

If the County's Little Falls Park had been an actual "federal highway facility", the FHA would have been involved.

"Wrong. Sprawl is development away from rapid transit - that's the smart growth movement's own definition they use to trash the suburbanization of America in the 1950s."

Why are you so stubborn and stupid, Dyer?

urban sprawl noun
Definition of urban sprawl
: the spreading of urban developments (such as houses and shopping centers) on undeveloped land near a city

Transit, rapid transit mass transit are not mentioned in the definition, of urban sprawl. They are entirely unrelated. Urban sprawl only needs to be on previously undeveloped land near a city. Westbard is currently developed so any redevelopment, no matter how dense, or even I’ll advised (according to you) simply can’t be considered urban sprawl.

How many times do we need to explain this?