A follow-up on last week's report on the sign man Bruce Variety had posted on the sidewalk in front of then-not-yet-open rival Bradley Party & Variety.

BP&V is now open. The Bruce Variety sign man is not only still manning the sidewalk, but has been joined by a second signwalker.

I've seen many a sign holder, sign waver and giant fish out in front of their own associated businesses along Rockville Pike over the years.

But this is the first case I can recall of a rival store advertising directly in front of a competitor. It is a public sidewalk, and therefore not part of the actual shopping center property.  I assume it wouldn't be happening if it wasn't legal.

I'm not being critical of the sign strategy, or endorsing it. Rather, I'm genuinely curious why no one has done it before, if this is legal to do. It would be something for other businesses to employ. For example, Walgreens could have several people stand outside of CVS holding Walgreens signs. Or Whole Foods at Harris Teeter. Or Guapo's at Uncle Julio's. What's stopping them? This could be a whole new marketing tactic. 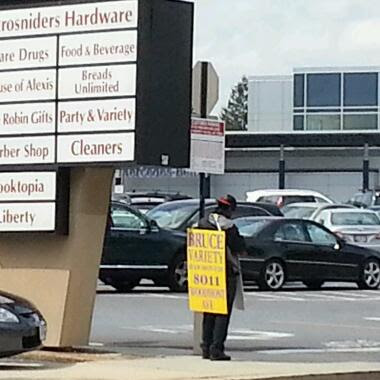 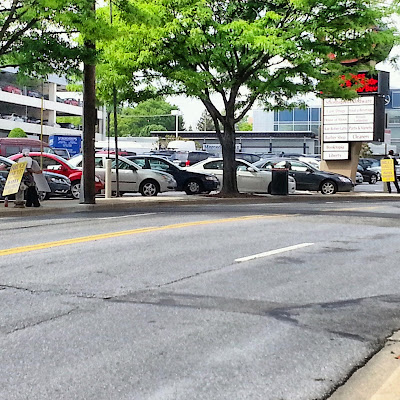 Nothing illegal about the sign waver on a sidewalk as far as I know. A good reason why other business don't use this method is there's no point. People at Whole Foods know Harris Teeter exists as an option. People at Guapo's know Uncle Julio's exists. You aren't normally going to change minds.

When a dopelganger replaces a store that has moved down the road, there IS value in letting people know that a: This isn't the same store, and B: the store still exists nearby.