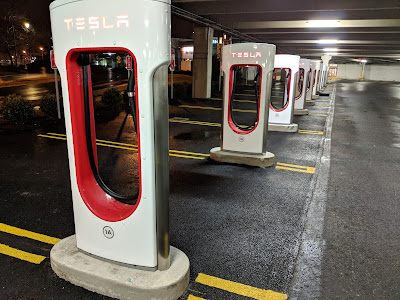 What are you going to do while your Tesla charges? The only things left in the mall are those awful seasonal shops and a crappy food court

I recommend using only Photos #1 and #6 for this article. The rest are extremely redundant and add zero context to the article.

8:52: Sour grapes for missing this scoop, with fantastic illustrative photos showing real charging stations in our area, that really help readers understand the story. I have the best and slickest mobile site in Montgomery County news, one of the reasons Bethesda Now is now resting in peace.

The haters and trolls roll in...


Arclight sucks. I've seen 4/5 movies there and somehow the audio has been slightly off for half of them. no refills on popcorn? really? Also drinking some sugar loaded themed drink for a movie is overrated.

Microsoft Store? Wow the rich must definitely be fleeing MoCo if we are hitting up Microsoft Stores for entertainment now. My kids going to be real thrilled with his Surface Pro hopefully he loves it as much as his Zune. I'm the parent who saves the $50 and gets the crappy version of all the Christmas gifts.

Starbucks? Oh while the Tesla charging lets hang out like unemployed grad students and look at our watches until we can leave again.

Amazon has killed department store shopping. Food courts stink and I'm not waiting in line for the overrated Cheesecake Factory (this isn't Nebraska why do we even have one)

Cheesecake Factory packs it in on the weekend. Has to be one of the busiest restaurants in Bethesda on a Saturday night.

if that's true (I don't get out into the suburbs much) then Bethesda has awful taste. They should try visiting the Row and Woodmont more often.

1:48 PM I'm not saying it's good or bad, but fact is there are lines waiting to get in to Cheesecake Factory on the weekend. I can't say I've seen lines for anything around Bethesda Row other than Class 520 ice cream on Elm Street.

1:30: How is someone out-of-state poaching a local business a "score?" Companies acquire MoCo businesses all the time. It doesn't help our economy, especially if the business then moves as a result of the merger.

The benchmark is how many major/Fortune 500 corporate headquarters we attract, and that total is zero for the last two decades.

11:07: What do you do when traveling far on the road or by air at rest stops and airports? Spin vintage vinyl and brew your own beer? There's plenty to do for the non-hipster traveling by car who stops 20-40 minutes at Montgomery Mall to charge their Tesla.

Microsoft - ever heard of Xbox? A huge success, and you can play it at their store.


I'm not 12 and I'm not going to push that age group out of the way to play a video game.

5:42: You had said your child would be going in, and implied that Microsoft had only second-tier products. I just pointed out they have Xbox One, a very successful and popular game system.

Barnes & Noble was 37,500 square feet. Amazon Books will be only 6,000 square feet. Bethesda used to have over a dozen new and used bookstores and record & tape stores, now it has zero. If you can't see this obvious trend, there's no talking sense into you.

These Tesla charging stations are a total Obama scam. They are popping up all over taking up alot of space and rarely get used except for maybe DC & CA. A Tesla starting price is 130k is it any wonder few can afford such a ridiculously overpriced vehicle. I'm so happy President Trump supports increased domestic oil production and oil independence from the Arabs. These stations will be abandoned eyesores soon enough. #MAGA

9:28 AM Presumably that was an attempt at satire.

Bethesda is probably among the top areas in the country in regards to Tesla ownership.

Great news, thanks for your article! Tesla leads the way in electrification of transport, and they back it up with reasonably priced charging stations at convenient locations, in the places I drive, shop, dine, watch movies, and hang out. I've already used two supercharging locations in MoCo and Frederick, and it worked great. (For the Russian troll: My new Tesla cost $41K, BTW, not $130K. And it is really a fantastic car.)