YACHT CLUB OF BETHESDA SPACE FOR LEASE AT DOUBLETREE HOTEL 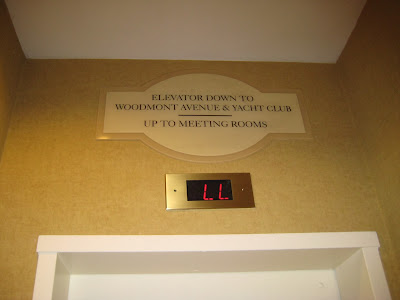 The future of the former Yacht Club of Bethesda may have just gotten a bit brighter at the Doubletree Bethesda hotel. A long-dormant below-sidewalk-level den once operated by the legendary Tommy "the Matchmaker" Curtis, the space has just been put up for lease by commercial real estate firm Cushman & Wakefield.

In the last few years, the hotel had considered renting out the space as a self-storage facility. It would certainly be preferable as a nightspot, in my opinion. Currently, that block of Woodmont Avenue is dead as a doornail at night. With life potentially coming to both sides of Woodmont on the next block north, a new dining/nightlife establishment would really help that corridor of the Woodmont Triangle - bigtime. As it is, you have some pedestrian traffic going in and out of the two hotels on the block, and some at Guapo's. But the block is rather lonely after dark, when most businesses there close. It didn't used to be that way, when Tommy the Matchmaker's singles bar crowd lined up outside.

Personally, I would think the spot has a lot of potential. You have a lot of business travelers, and a good bar or nightclub - promoted to hotel guests - could draw in customers who have quite a few options a bit further away. And that would really help to activate that block. Serving food from the hotel's kitchen could also draw more attention to the other dining options the Doubletree has inside the hotel.

As Tommy used to say, "Goodnight from the Yacht Club of Bethesda!"

If anyone knows how to get in contact with tommy curtis my email is seadoghero@gmail.com

If anyone knows how to get in contact with tommy curtis my email is seadoghero@gmail.com

maybwe this could be shown to tommy and have come out of retirement, no other place quite like the yacht club, was simply the best