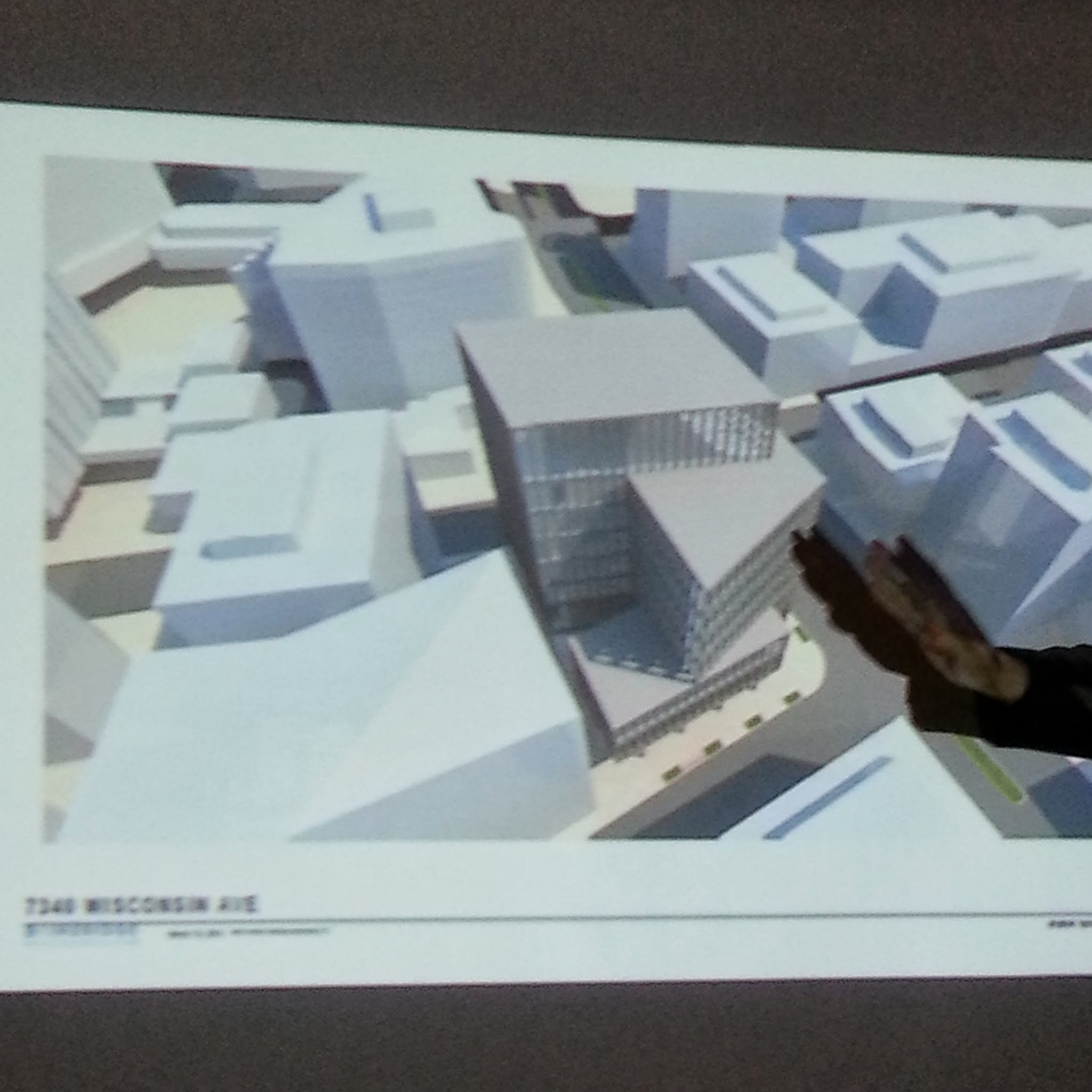 Developer Bainbridge is preparing to file its site plan for a 143' tall luxury apartment tower at 7340 Wisconsin Avenue, in downtown Bethesda. The 255-unit building will be near the Bethesda Hyatt hotel and future Purple Line station, and is literally on top of the Bethesda Metro station. As such, Bainbridge attorney Bob Dalrymple predicted, future tenants will be more likely to use Metro than commute by car.

Dalrymple - joined by several architects and a Bainbridge representative - hosted a public meeting on the development Tuesday evening at the Bethesda-Chevy Chase Services Center. He said Bainbridge expects to file the site plan by the end of this month, and believes the plan will reach the Montgomery County Planning Board for approval in July.

Construction would begin next year, and delivery and occupancy are expected by the end of 2016. The site was formerly an Exxon service station, and has been vacant for some time.

15,000 square feet of the building will be dedicated to other uses, such as retail. But Bainbridge is amending their initial plan to allow greater flexibility in use for that non-residential component. Bainbridge is not ruling out additional density in the overall project, should master plan updates allow it.

The building will have a 4-level, underground parking garage, with access off of Montgomery Lane.

Some details on the architecture and design are now known. The south side of the building will have a courtyard. A green roof will be among the environmental features utilized to achieve a LEED Silver rating. However, a portion of the roof will be retained for unspecified resident amenities.

Those residents will need to be well off; rents will be at the "higher end of the market." The units will consist of efficiencies, 1-bedrooms and 3-bedrooms.

Public art is expected to be a major element of the design. Some will be in a public use area on Hampden Lane.

The major art piece will be an LED installation called "Point Field," by renowned artist J. Meejin Yoon of Boston. Well-known pieces she has created include "White Noise, White Light" from the 2004 Athens Olympics, and "3 Degrees of Felt" at the Guggenheim. Architecture Record Design Vanguard, and the Rome Prize, are among her prestigious awards.

Public comment at Tuesday's meeting was interesting. A union representative from the Metropolitan Regional Carpenters asked about wages for construction workers, stating that wages for workers on other Bethesda projects have been substandard. He was rebuffed by attorneys, who said that political discussion was inappropriate for this particular forum.

A representative of Tommy Joe's, a popular restaurant and nightspot located behind the proposed building, was concerned about potential noise complaints from new neighbors. Tommy Joe's sister business, Roof, has already had 20 complaints before the rooftop portion has even opened, he said. Those complaints came from residents of Triangle Towers on Cordell Avenue.

What level of noise is tolerable at night is a debate expected to only get hotter in the coming year, as the county council seeks to expand late-night bar hours, and expand noise exceptions near urban residences.

A Bainbridge architect said the firm would conduct acoustical testing, to see if conflicts with Tommy Joe's operations could be avoided.

All photos by Robert Dyer @ Bethesda Row
Renderings within photos are
courtesy of Bainbridge and the
respective architects;
All rights reserved.
Posted by Robert Dyer at 10:00 AM