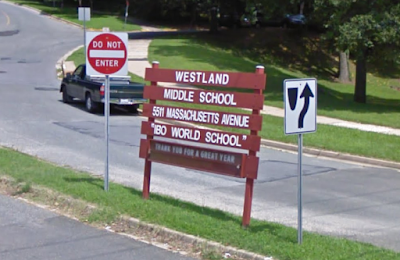 The process to decide which students will attend Westland Middle School, or an under-construction alternative on the site of Rock Creek Hills Park in Kensington, will begin this coming Monday, February 1. Montgomery County Public Schools will hold an informational meeting that night at 7:30 PM, in the cafeteria of Bethesda-Chevy Chase High School at 4301 East-West Highway in Bethesda.

MCPS staff will make a presentation, and then take questions from attendees.

The school system says a Boundary Advisory Committee will examine several different sorting schemes, consider public feedback from Monday's meeting, and present its findings at a second meeting on May 12, 2016.

Whoever is named the new Superintendent of MCPS will then make a recommendation in mid-October, and the Board of Education will officially adopt the new middle school boundaries the following month.

Bethesda-Chevy Chase Middle School #2 is scheduled to open in August 2017 (unless the current statewide drive to start the school year after Labor Day is successful before then).

Documents and materials generated during the February-May study period will be available to the public on this site.

Interpreters will be available at the meeting for Spanish speakers.