Can you identify these Bethesda armed robbery suspects? (Photos) 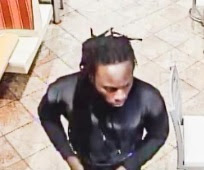 An armed robbery at Westfield Montgomery Mall on November 27, which I was first to report here on this blog, is still under investigation by Montgomery County Police detectives. They have released surveillance camera images of a man and woman who used the credit cards taken during the robbery at retail stores in NE Washington, and the robbers' getaway car.

You might want to share these photos with anyone you know who lives in the NE Washington area, or the near-in Montgomery County and Prince George's suburbs, as the choice of shopping location suggests the suspects may been from that vicinity. 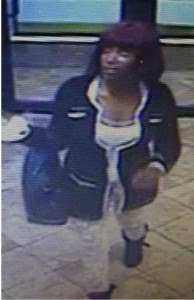 On the day of the robbery, at approximately 6:02 PM, the adult female victim was robbed by three males in a parking garage police describe as being "near Macy’s". One of the suspects was armed with an unspecified weapon. The men took property from the victim, including her credit cards. They then fled the area in a grey Dodge Avenger, with damage to the front passenger side tire rim.

The three suspects are described as black males, approximately 20 to 25 years of age.

Anyone with information regarding these suspects or this robbery is asked to call the 2nd District Investigative Section at 240-773-6710. Those who wish to remain anonymous may call Crime Solvers of Montgomery County toll-free at 1-866-411-TIPS (8477). Crime Solvers will pay a cash reward of up to $10,000 for information provided to them that leads to an arrest and/or indictment in this case.
Posted by Robert Dyer at 4:00 AM

Do you have any idea why the Montgomery County police waited for SIX WEEKS to release the photos and descriptions of the suspects and their car?!