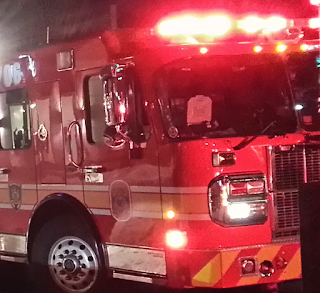 Update 7:59 AM: Fire is out, and firefighters are beginning a cleanup at the scene.

7:51: Firefighters have gained access to the unidentified building housing the rooftop HVAC unit that is the source of the fire.

7:46 AM: Unconfirmed scanner report suggests fire is now out.

7:45 AM: MCFRS spokesperson Pete Piringer says the fire is "gas fed," and a tanker truck has been brought in to assist with water supply issues at the site. Firefighter states via radio that controlling the gas is the priority in order to put out the fire.

7:38: Firefighter states via radio that fire appears to be confined to the rooftop HVAC unit, and hasn't yet spread into the building below.

7:38: Firefighters asking for utilities to the site, including gas, to be cut.

7:35 AM: Firefighter states via radio that the fire appears to be in a rooftop HVAC unit. There are some difficulties with accessing the buiilding and fire hydrants, according to Montgomery County Fire and Rescue spokesperson Pete Piringer.

Firefighters responded to a report of smoke at the Fourth Presbyterian School at 10701 of S. Glen Road around 7:15 this morning. They are currently on-scene. After firefighters searched the campus for several minutes, one firefighter stated on the radio that she saw flames on the roof of a building.

An earlier scanner report suggested flames were seen atop a building, possibly the gymnasium.
Posted by Robert Dyer at 4:30 AM