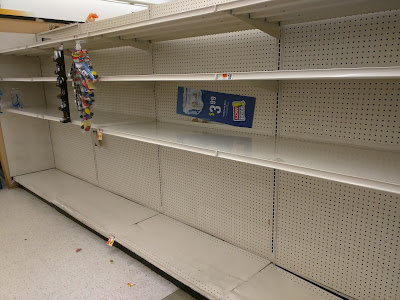 Bethesda residents and businesses have used the ample warning time to well-prepare for Winter Storm Jonas, expected to arrive mid-afternoon today in the DC area.

The Giant at the Westwood Shopping Center last night around 9:00 PM was fairly crowded, but lines weren't as long as you might have expected. There was no wait at all for a self-checkout aisle.

Shelves were virtually bare in the bread aisle. Also cleaned out were eggs, water, yogurt, cheese, sliced deli meat, most of the butcher department, and many organic products.

But the store was doing a great job - there was plenty of milk in stock, plenty of frozen dinners, and even paper goods. I was able to get everything I needed - except every single jar of regular Jif peanut butter had been snapped up, so I had to get Skippy instead. #RodStewartProblems

Meanwhile, outside the store, a car carrier truck driver was frantically loading automobiles in the far end of the parking lot. In recent months, Ourisman has stored extra vehicle stock in that parking area at the shopping center. Last night, all of those cars had been - or were being - removed ahead of the storm. 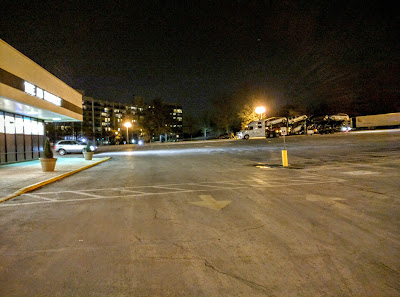 Elsewhere in Bethesda, retail and restaurant businesses were strategizing emergency schedules and battening down the hatches. Quartermaine Coffee Roasters at Bethesda Row already had an announcement taped up regarding its schedule for the weekend - closing at 1:00 PM today, and remaining closed Saturday.

Their neighbor, Bethesda Bagels, will close an hour later at 2:00 PM today.

Also at Bethesda Row, Redwood is promising to be open all day on Bethesda Lane. Stop in during lunch (11:30 AM - 2:30 PM), and you'll get a free cup of their soup of the day.

In the Woodmont Triangle, Grapeseed is making a similar pledge. Chef Jeff Heineman says Grapeseed will open as usual at 11:30 AM, and then "stay open straight thru until I have to leave in order not to die on the way home."

Chevy Chase Supermarket, where employees often sleep in the store to serve the surrounding community during weather events like this, will open at 9:00 AM this morning. In stock will be gallon bottled water, firewood, logs, sterno, and fully-stocked deli, dairy and meat departments.

Stay tuned here, and 24/7 on Twitter at @BethesdaRow for updates throughout the storm. 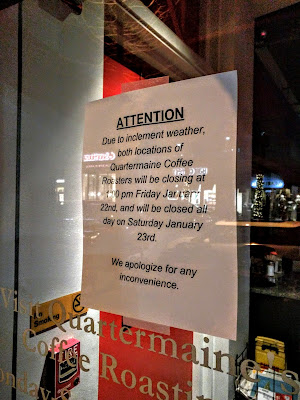 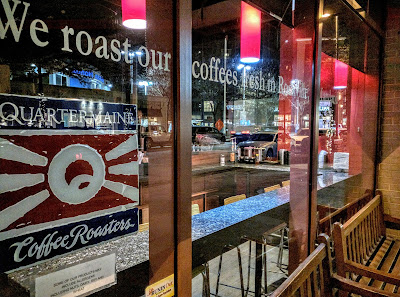 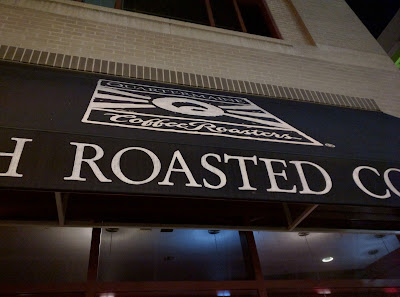 I hope you and all of your readers stay safe during the storm. We'll make sure to leave the Tesla in the garage

That sounds contradictory. "Promises to be open until 2:30" would be much clearer.