What was the number one reason people called the BCC Rescue Squad in 2015? 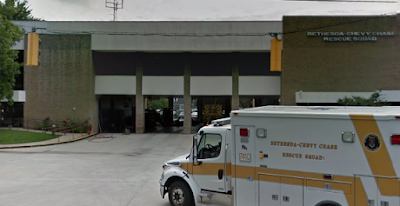 The Bethesda-Chevy Chase Rescue Squad is celebrating an impressive 76th year in Bethesda. A private fire/rescue service, BCC Rescue Squad answered 9,606 emergency calls last year, an increase over 2014. "Sick person" was the top reason for calling the squad in 2015, followed by auto collision, and personal injury.

Answering those calls not only benefits the patient, but also frees up Montgomery County Fire and Rescue to deploy its assets beyond what it could without the auxiliary function BCC serves. Of course, both services often work together at major incident scenes.

The squad's Chief, Edward G. Sherburne, Jr., noted yesterday that Bethesda's booming population brings added dangers for pedestrians and cyclists in particular. “As the number of residents and visitors in the Bethesda area increases, we see our call volume increase,” Sherburne said. “Pedestrian, bicycle, motorcycle, and automobile safety are still a major concern. We urge residents and visitors to drive more slowly and
watch carefully for bicycles and pedestrians.”

With a team of 150 volunteers, BCC serves the Bethesda-Chevy Chase area and upper Northwest Washington, D.C. It is currently considering options for replacing its aging firehouse at 5020 Battery Lane, and plans to remain at that site regardless of any redevelopment option chosen.

If you would like to support the organization's work, the B-CC Rescue Squad is registered under section 501(c)(3) of the Internal Revenue Code, and contributions are tax-deductible.
Posted by Robert Dyer at 5:30 AM