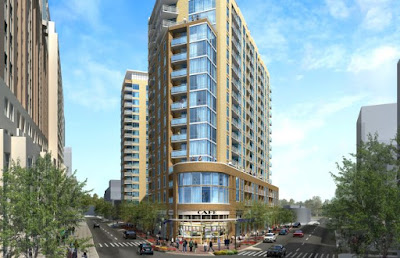 Developer Donohoe has requested construction and demolition permits for its second Woodmont Triangle mixed-use project, The Rugby. Long in the works, The Rugby will be a sister building to the existing Gallery Bethesda. The Gallery was the first next-generation luxury apartment building to be delivered in Bethesda after the great recession, and has won several awards. It also enjoyed the fastest lease-up of any building in the state of Maryland in 2014.

The two buildings will frame the already-completed pedestrian plaza at 4800 Auburn Avenue, and Donohoe is aiming for restaurant-retail tenants with the 14,520 SF of commercial space in the project. Such tenants will help activate the plaza, which already hosts several public art pieces. The Rugby will house 221 residential units; the market will likely decide whether those units end up being rental or condos. Beneath the building will be a 3-level underground parking garage.

Donohoe expects a 2017 delivery, and will once again serve as its own construction contractor. Among the buildings to be demolished is the Miller and Long office at the intersection of Del Ray and Rugby. In a nice touch, that building's distinctive facade has been incorporated into The Rugby by WDG architecture, the design firm on the project.

The completed dual towers and plaza will be one of the central gathering places of the future, redeveloped Woodmont Triangle neighborhood.

Rendering courtesy Donohoe/WDG
Posted by Robert Dyer at 5:51 AM

Can't wait for this. The more we can spread the woodmont triangle central core the better towards battery and surrounding areas.

It would be nice if Palisades made more attractive office frontages on that side. And Triangle in a pie in the sky wish could take their garage spaces facing that side and turn it into retail. Really open up and connect this area.

I really like this new writer here this morning.

These straight news pieces are really good and a welcome step away from the highly opinionated pieces. Good work!!

With all the new units in the pipeline in this area, Metro should really begin exploring the possibility of a southern entrance for Medical Center at Jones Bridge Road on the West side, if they haven't already.

Any word on where Miller & Long relocates to for this project.

Was this previously in discussion? That would be fantastic!!

Awesome project. And thank you for not turning it into some dumb rant, Dyer.

How wonderful. And right across the street from the new police headquarters.

There goes my view! I live in Triangle Towers and when that building goes up I'll get a nice view of the apartments next door. Also not looking forward to the construction noises.

Anyways, I'm surprise they are going forward when several other apartment buildings are opening this year including:7770 Norfolk, Flats8300, Element 28, and Solaire in downtown Bethesda (and I'm sure I'm forgetting a few). With JBG putting the 17-story residential building 7900 Wisconsin Apartment Project on temporary hold. I hope they don't decide move to phase two.

The absorption rate for the DC area is very high so there's plenty of demand!

I'm sure Triangle blocked someone else's view at some point too.

I love the last paragraph. It absolutely shouts "sponsored content".

I would also like to echo the comments above regarding appreciating an actual factual news piece.

"Any word on where Miller & Long relocates to for this project."

7:27: "It absolutely shouts" fact. It is one of the public gathering spaces being developed in the Woodmont Triangle.

So 7:27 isn't allowed his opinion that the last sentence seems like sponsorship while your opinion that this will become a central gathering space is fact. Nice.

It's certainly a nice amenity, but what is the basis for claiming that it "WILL be one of the CENTRAL meeting places"? From where will all these people come? It's in the middle of a long block, it's not part of a longer pedestrian path, the north end fronts sleepy Rugby Avenue, and the south end fronts the Berlin Wall of the Triangle Towers.

Yes I always talk about how terrible that Triangle and Palisades back wall is. Un-inviting office spaces, parking garage entrances, and loading docks behind Palisades. Same behind Triangle plus the exposed garage parking.

In the future when the senior citizen home and police station are added that's no connectivity or retail surrounding that central plaza.

Not to mention the Gallery has a gym taking up valuable first floor retail fronting the plaza. Maybe it's convertible in the future?

Sad because it has so much potential.

Sweet young things can't afford the rent at the Gallery. :(

We got a major company headquarters moving from DC to Montgomery County. Score one for MoCo!

We got a company moving into new digs and adding residential and retail to their old. Score two for MoCo!

6:38: Yes, they do plan to eventually move the fitness center upstairs, freeing up that space for a retail/restaurant tenant. Which will obviously be more viable when the second tower is generating more foot traffic.

This would be more central if they put the road through to connect battery and extended the park.

5:06 AM Sorry, running a road through the park and destroying it is not the solution.
Save the park!

Did you see the planner recommendations? They suggested the road with an addition to the park so the park actually would get bigger if the road ever happens. So there is no need to "save the park".