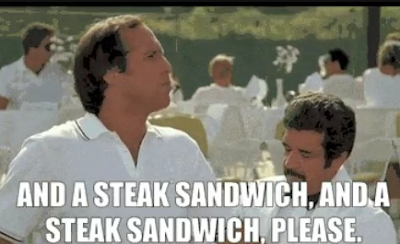 There's some good news for long-patient fans of South Street Steaks in Bethesda. Although their bricks-and-mortar location on Cordell Avenue fell victim to a car crashing into it, they have now launched a food truck. Their website and social media have not yet advertised their location(s) or hours, but the truck has been spotted by the Bethesda Community Store at 8804 Old Georgetown Road. That's just north of Suburban Hospital. Until they start advertising, that's just a tip I can pass along to cheesesteak aficionados.

The food truck would seem ideal to reach one of their largest fan bases, people who took advantage of their late hours, now a rarity among restaurants in downtown Bethesda since the Montgomery County Council tanked the nighttime economy with their disastrous "Nighttime Economy Task Force" initiative. If this were eight or nine years ago, South Street Steaks would have been able to park their truck near the few remaining bars in the Woodmont Triangle, and do some big business.

But Councilmember Hans Riemer also managed to destroy the food truck industry in Montgomery County, along with nightlife. No longer allowed to park on public roadways, 96% of trucks went out of business or fled back into the District. So unless a generous property owner will allow them to operate on private property (such as the Bethesda Community Store lot), they would not be allowed to operate in downtown Bethesda. What a County! No one knows how to stifle free enterprise, business, and entrepreneurs like the Montgomery County Council.

Heckuva job, Brownie!
Posted by Robert Dyer at 7:03 AM

It would be funny if a new restaurant opens in the old site on Cordell Avenue, and it is smashed-into by the South Street Steaks truck.

Yeah but it will still suck unless the original guys return. Here's the deal: If it was incredible, as many food truck offerings are, it would get a buzz and people would flock to the place and they'd serve 100's of hoagie's (that what they're called in Philly) daily. My guess is that they'll struggle to even do a decent lunch. Food trucking ain't easy.

Food trucks hurt local restaurants that depend on lunch time traffic, and they block turning lanes (such as the one that used to park everyday at Woodmont and Norfolk). I am in favor of not letting them park and operate on the streets.

9:17 - Here's a quick lesson in free market capitalism. If restaurants aren't good enough to compete with any competitor then they deserve to go out of business.

Its a real shame food trucks can't operate in MoCo as in other jurisdictions. What a crap rule.

IMO Continental in Kensington has the best steak & cheese in the area.

Continental best? You cannot be serious. Maybe after a night on the town. But my God!

All comments mentioning Kensington will be promptly deleted.

@12:53 - Continental is great, but I feel like a big part of their draw is the surly attitudes and bad-tempered service. It just adds a certain - *chef's kiss* - to the experience.

It's not awesome. It's awful food. It's a mystery why it's been so successful. Does anyone really think that Grotto Pizza at the beach is really good pizza? I don't think they do but it's been the most successful pizza chain in the entire state of DE.