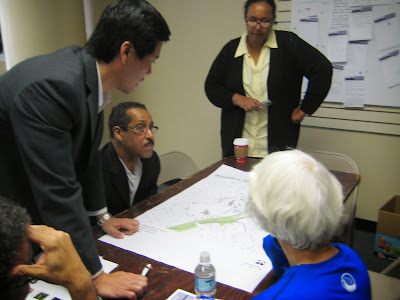 Day 2 of the Westbard Sector Plan charette was even busier than the first, with meetings sometimes going on simultaneously in the Montgomery County Planning Department's temporary space in the Westwood Center II shopping center. A fascinating discussion of history and environmental issues started the day with the Sunrise Session for business owners.

Some industrial business owners who own their land are open to selling for the right price. Others, like Bonds' Citgo service station on Westbard Avenue, would like to stay if allowed by landowner Equity One. From all that was discussed, there are many environmental issues within the sector, ranging from serious to scary, and could deter construction of residential housing on those sites without very costly cleanup. Did you know that the owner of a pesticide business on Butler Road was a Navy Cross recipient, a pilot in the Battle of Midway, and a P.O.W. in the Bataan Death March? What a story!
The Springfield Civic Association's top concerns were schools, traffic (particularly cut-through traffic), and zoning/density. SCA President Phyllis Edelman said "current transit is insufficient" in the Westbard area. She said the SCA opposes connecting a current cul-de-sac on Jordan Road into the future Westbard "town center," because it would be "opening a can of worms." The association, which represents the neighborhood directly behind the Westwood Shopping Center, supports the plan to daylight Willets Branch Stream. SCA Zoning Chair Pete Salinger said of the future redevelopment of the Westwood Shopping Center that "most of us, almost all of us, want to retain that local flavor, the community feel that we've got here."
Brookdale, a neighborhood of single-family homes near River Road and Western Avenue, stressed schools, the need for more sports facilities, protection for tree canopy, cycling facilities, and protection of pedestrians walking to school and to the Little Falls pool. They also want to retain the local services in the shopping centers and industrial areas, such as auto repair, gas stations, and pet stores. Planner Marc DeOcampo said that such industrial uses are key to the continued success of neighborhoods inside the Beltway.
The session on transportation was the most tense of the day, as Westbard Mews residents came out to condemn the proposed Crown Street bypass from Westbard to River Road next to their homes. Westbard Mews President Dick Mathias said he was "shocked that I hear what I feel is a strong bias by planning staff to build this new road, 20 to 40 to 50 feet in front of houses and damage" their values. "This came up for the first time Monday night," he continued. "We'd never heard of it. [You] give us six days to mobilize opposition...it's a screwy way to develop."

A current Crown Street resident said, "You would destroy our community and the value of our homes in one fell swoop, what for us is an oasis of calm."

By Wednesday night, planners had offered a new alignment that would run the bypass off Westbard through the Park Bethesda property as an option.
Speaking of Wednesday night, planners unveiled 3 alternative designs for the new Sector Plan, and took feedback from a not-so-happy audience. Heights in all three were higher than many residents had asked for on Monday. "We're slipping towards downtown Bethesda," one resident said, and felt that planners "did not include the feedback given by residents Monday night."

Planner Paul Mortenson responded that "we didn't feel that was fair to those [land]owners."

"I think it's a little bit disingenuous to say it's not fair," the resident rebutted, arguing that Equity One had said it could make a profit even without changing anything about the existing retail on Westbard.

Mortenson said planners are encouraging developers to choose structured, not surface parking. One resident said she often shops alone, and that surface parking "works for me. I feel safe. Parking garages are a nightmare." Equity One proposed an underground garage on Monday.

Residents did praise provisions in the plan for a new elementary school, buffering for Kenwood Place, and daylighting of the Willets Branch Stream. Each of the 3 plans had different road alignments and components, and locations for a new elementary school. Residents were split in opinion on those. There was also support to retain one of the Citgo stations on Westbard Avenue (including from me), as an essential service to the community.

I have to say that the planners did come up with several innovative ideas to deal with traffic, even if they are controversial, and the potential new school and Little Falls Library sound promising. The transformation of the stream into a new linear park would be fantastic. Whether the schools and roads can handle the density permitted is unclear. The heights being talked about for the Park Bethesda site are surprisingly high, as well. I hope we'll hear more from the State Highway Administration on how road capacity might be expanded on River Road, and that concerns about the environment and lost history of the African-American community there can be addressed in the plan process.

Planners will now take feedback on the 3 versions, and try to create a final composite for presentation to the community and the Planning Board. You can examine them below: 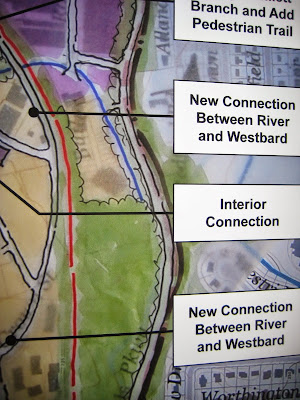 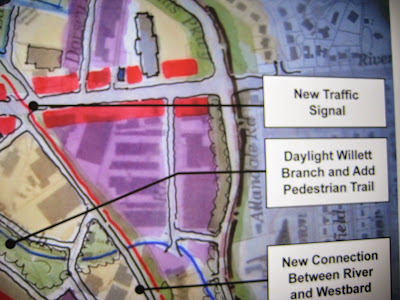 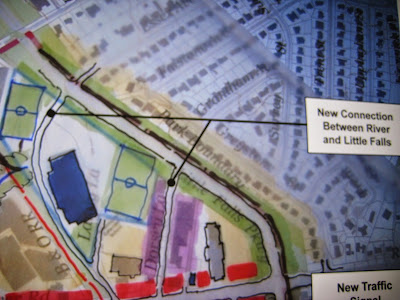 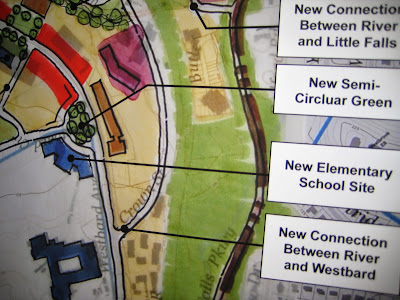 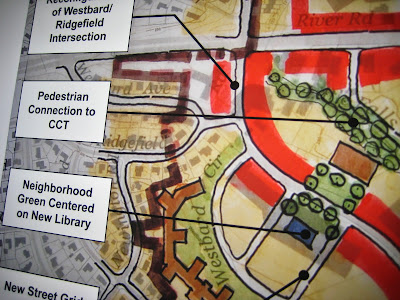 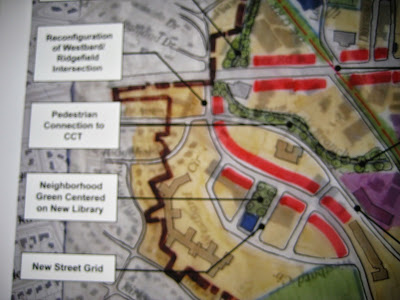 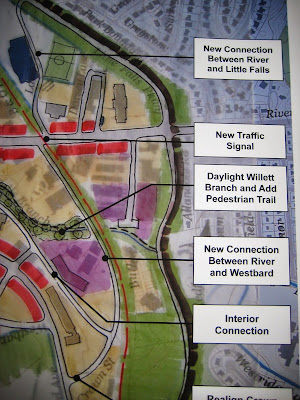 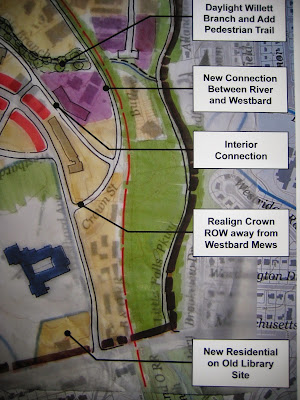 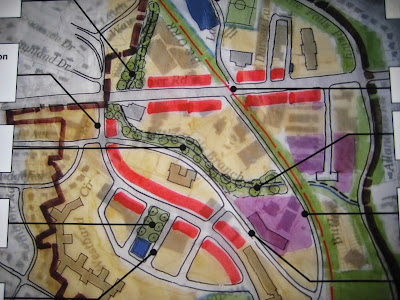 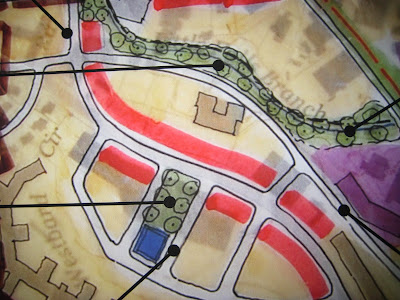