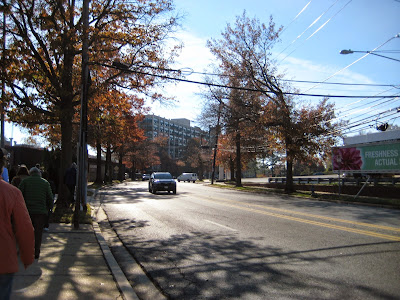 While few business owners took advantage of the Plan Westbard Sunrise Session Wednesday morning, those who did show up had easily the most fascinating conversation so far in the week-long Westbard Sector Plan charette. Who knew that the Westwood Shopping Center site was a U.S. military rail yard back in World War I? That today's Crown Street was likely a remnant of the switchback that carried the rail spur from the main line of the Baltimore & Ohio's Georgetown Branch Railroad up to the rail yard? And that there is a potentially scary connection between the mustard gas munitions scandal at American University and the Westbard area of Bethesda?

Apparently, the mustard gas shells that were tested - and eventually, quietly buried - around American University were brought to the area by train, and then trucked from today's Westwood Shopping Center site to the university. Legend has it that a rail car containing these poisonous shells ran away from the rail yard, rolled down the Crown Street spur back towards the main line, and derailed at the bottom of the hill. Supposedly, the volatile car was then buried in the quarry pit in the vicinity of the structures at 5200 River Road (down at the end of the un-named road that runs down past EuroMotorcars Volvo). The military then instructed that concrete be poured over the rail car, and it very likely is still down there. There are apparently some other as-yet unidentified substances underground at various sites in the Westbard Sector. Reportedly, other rail cars were buried down in the quarry area when the Pentagon eventually abandoned the site. Their contents, if any, are unknown.

Planners have assured they are looking into the potential contaminants at these and other sites in the Sector Plan. It would seem that, if records indeed confirm this credible story, that excavation of these sites should be handled cautiously and with U.S. military oversight, as with the American University/Spring Valley munitions cleanup. Certainly, military records should be examined to determine the full scope of activities at this site, and along the former route of the spur.

A preliminary review of soil maps from the World War I era, along with notes made from walking the area prior to the charette by environmental planners, did appear to confirm the remains of a road bed or railroad bed in that vicinity below the grade drop from the Westbard level.

Stay tuned.
Posted by Robert Dyer at 7:00 AM

Now this is the Dyer I am on board with. Fun!

Wow I know developers budget for some curveballs along the way but buried chemical weapons is really hard luck.

I hate to spoil an interesting story with a pedantic digression, but "the Pentagon" didn't exist in World War I. The building wasn't built until 1941-43. The Departments of War and the Navy did not merge to form the Department of Defense until 1947-49.

That said, I am "on board with this Dyer", too.