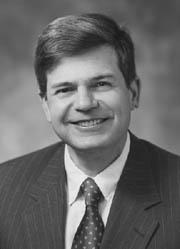 Since then, the Republican has worked on Capitol Hill, and is currently Senior Counsel to the United States House of Representatives Committee on Oversight and Government Reform. He is also an alternate member on the National Capital Planning Commission.

A liberal Republican, Denis was swept out in an election year dominated by anger over the Iraq war, and the presidency of George W. Bush. He has been a longtime resident of Friendship Heights.

Denis will be interviewed by the County Council on Tuesday, January 12, at 9:45 AM.

To get a sense of just how long some of the councilmembers have been in office, several interviewing him from the dais tomorrow served alongside him. Former Maryland state delegate Robin Ficker is gathering signatures for a ballot initiative to limit County Councilmembers to three terms. If the petition effort is successful, and voters approve the measure, four sitting members of the Council would be forced to step down in 2018.

Local restaurateur Roberto Pietrobono (Olazzo, Gringos & Mariachis) says he is supporting the term limit initiative, due to the Council's stonewalling defense of the County Government's liquor monopoly.
Posted by Robert Dyer at 7:00 AM

Liberal republican? Does that mean he supports Bernie over Cruz?

I am one of many liberal republicans who has been abandoned by their party.

Ah yes, local curmudgeon Robin Ficker, attempting to get himself elected, but still not succeeding.

I wouldn't vote for Ficker, but I like what he's doing to stir up county politics. He got the amendment passed to require unanimous consent from the council to raise property taxes. His term limits petition is also very worthwhile. Where can I sign it, or does he have enough signatures already?

Don't I remember Ficker calling Ken Beatrice's show all the time? Is this the same guy?

Dyer is stuck in the 1970s. He thinks that Mac Mathias would feel at home in today's GOP.

3:21: And you think that Wall Street, mortgage shark and health insurance company-backed Hans Riemer is "at home" in progressive Democratic Montgomery County? Both he and Ted Cruz are funded by Wall Street - another team like Riemer & Romney.

Me am Boob Derp. Me am unelected fifth at-large MoCo Councilperson.

That is all, hello.

1:37: Hans Riemer has "sources of income" besides his massive, taxpayer-funded County Council? Do tell! Your Freudian slip has left many of his royal subjects in suspense. #GoldmanSachs