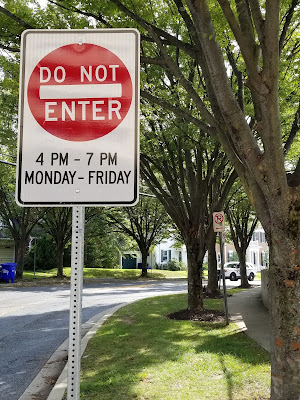 The recent aggressive War-on-Cars actions of Montgomery County on Leland Street in Bethesda may have backfired. An illegal closure of the road, ultimately reversed after it was exposed to have been done without the required public process, was simply piling-on with onerous turn restrictions and traffic obstacles already in place. All the illegal move did was draw attention to the fact that, with Leland Street classified as an arterial road, it is ineligible for traffic volume restrictions - much less a closure to traffic. 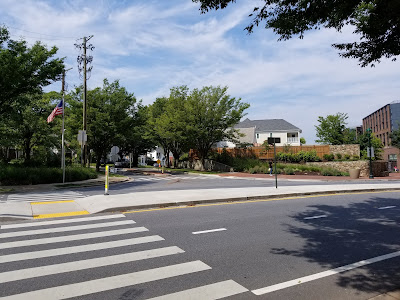 Now, Bethesda resident Ashish Goel has written to Montgomery County Department of Transportation Director Al Roshdieh, putting him on notice that he must remove those restrictions - or be found in violation of County law. In his letter to Roshdieh, Goel cites Section III.B of Montgomery County Executive Regulation 17-94, which states, “Only tertiary, secondary, and primary residential streets are eligible for volume restriction measures.”

Goel is asking Roshdieh to immediately remove the existing turn restrictions on traffic from Woodmont Avenue between 4:00-7:00 PM, demolish the recently-added concrete median which restricts left turns from Leland to Woodmont and vice versa, nullify traffic citations handed out during the recent police sting operations on Leland, and cease any ongoing consideration of further traffic restrictions on Leland.

"Your office has shown that it is willing to unlawfully put the wants of a few over the rights of all Montgomery County residents," Goel wrote to Roshdieh Friday. "Enough is enough! Stop wasting Montgomery County taxpayer dollars to advance the agenda of this small minority of residents."
Posted by Robert Dyer at 5:00 AM

Good. Someone is exhibiting stewardship. Without that, county does what it wants when it wants. No one usually says a word. Go for this person to send a letter like that. More people need to get involved and call this crap out when they see it.

Would be great if someone could post a copy of the letter.

Robert is doing the community a huge favor. Are you adding into your complaint the other streets mentioned in your blog? Hillcrest/Rosemary/Stanford, Wilson/Glenbrook, Arlington/Elm and many more streets have the exact same signs throughout the county. Would be unfair to target just one!

You f-ing rock!!! If you run for office, you have my vote. Way to act! Thank you sir!

Just take Arlington when you scurry back to Westbard and quit yer bitchin'.

Or have one meeting at the County Council and change the color of the street designation to blue, residential, and leave the sign, or put back the No Right Turn from 4-6 PM version. Baada Boom.

Clearly this is a residential street with single family houses and driveways on both sides, and is in a location that makes cut through traffic very easy and desirable, and dangerous. A turn restriction is a common practice to help reduce cut through traffic at rush hour. I am not sure why so many folks are unwilling to help out these residents. Yes they may have followed the wrong path to achieve some relief, but how will you all feel when the next "boom" is when a kid gets hit so you can get home 2 minutes earlier?

The County has a mediocre record at best on pedestrian safety. See Mr.Dyer's Apex sidewalk coverage as exhibit A.

Was it not determined the sidewalk closure is the state? And anyone illegally walking on the street is at fault?

Why isn't Robert Dyer reporting on the second-biggest business news this year in Bethesda?

Not having proper notice or signage.
I expect the County to coordinate with State... government 101.

This has nothing to do with pedestrian safety and everything to do with preserving resale value of the $1M+ monstrosities being constructed in the Saks neighborhood. If you want to have the convenience of having a large SFH steps away from downtown Bethesda, then you need to accept the traffic that comes with that. You can't have your cake and eat it too.

I'm so glad to hear about this news! I brought up in a previous blog posting that I thought that the restrictions were illegal due to the road classification, and I am so glad that I was correct. I don't even drive on Leland but I am annoyed that these residents think they are more entitled than others. Thank you for reporting on this!

Normally I would be against such closures of public streets, on principle. But since Robert Dyer is against it, I am for it.

To 8:04, now that's mature of you. If you don't like the author of this blog, then why are you reading it and commenting on it. Sounds very childish, not to mention, it is annoying for those interested in reading insightful comments by readers who actually care.

This is great new indeed! Please keep us posted on the response of the director of the department of transportation. And off topic, if Robert Dyer has the ability to delete comments from this blog, there seems to be a troll on this comment board whose comments can use some deleting.

You must be an immigrant - doing the hard work that Robert Dyer won't do.

Hello everyone - I am the one who wrote this letter to the MCDOT Director. I encourage you to write something similar if you care about this issue. Here is the email in its entirety:

It is my understanding that your office is in continuing violation of Montgomery County Executive Regulation 17-94 AM (attached) as it pertains to the traffic volume restriction measures for Leland St. in the Sacks neighborhood.

Based on the Bethesda Downtown Sector Plan (BDSP), most recently approved 5/25/2017, Leland St. is classified as an Arterial street (Figure 2.08 of the BDSP--shown below).

As it is not classified as a residential street, LELAND ST. IS NOT ELIGIBLE FOR TRAFFIC VOLUME RESTRICTIONS. I am requesting your office take the following immediate actions to ensure it is not in violation of Montgomery County law:
1. Remove the ‘No Right Turn from 4PM to 7PM’ restriction from Woodmont Ave. onto Leland St. AND nullify all traffic citations given during the most recent “sting operation” ticketing those who took right turns on Leland St. from Woodmont Ave. in mid-August 2017.

Your office has shown that it is willing to unlawfully put the wants of a few over the rights of all Montgomery County residents. Enough is enough! Stop wasting Montgomery County taxpayer dollars to advance the agenda of this small minority of residents.

I appreciate your prompt resolution on this matter.

Even if the restriction for no left turn existed prior to 1994 it is clear the MCDOT is conducting a "reassessment". This reassessment can only logically lead to one conclusion - that the restriction should be lifted because it is not in accordance with current law.

In regard to the date questions, those became moot when the County Council last year affirmed that Leland is an Arterial road. Therefore, the residential-type restrictions must be lifted, or the classification must change, one or the other.

Not surprised to hear Berliner staff defending Leland privatization - that's how they've been getting all these perks. They must not have gotten Berliner's memo that he and fellow street-closure advocate Hans Riemer are now backpedaling from the Leland closure. This puts Berliner back in the thick of the controversy, not a good place to be.

So all we need is someone to pay the council MORE money than the Leland Street Consortium pays? Bethesda Turf Wars. Brutal.

"That ship has sailed already."

So is it not mature when Dyer doesn't like the county or his competitors and keeps writing about it! Is it annoying for those interested in reading news? Lol.

Seems like Little Falls Parkway would have to be reopened to two lanes as well if they enforce this law.

Regarding Little Falls Road: the traffic volume is not being restricted so I don't think this law applies.

Thank you letter writer for taking the time to address this issue. My grievance all along has been the combination of increasing population density and increasing road restrictions. You can't have both.

And it doesn't just take two minutes to use Arlington to get to Westbard. The lights are poorly timed, and traffic is heavy.