Sidewalks close on both sides of 7900 Wisconsin project in Bethesda 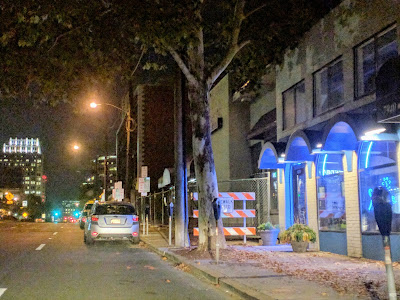 Well, there was that covered sidewalk that appeared in front of 7900 Wisconsin Avenue last week. But now it has closed, and so has the sidewalk behind JBG Smith's future 7900 Wisconsin project along Woodmont Avenue. 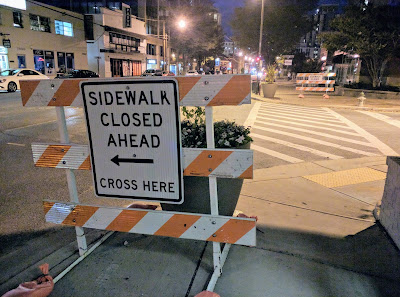 As of this morning, the north end of the covered sidewalk was open, but it was still sealed off at the southern end. Not much help to the pedestrian. Let's hope they're working on something that actually requires these closures for a reasonable amount of time. Even in that case, there should be a sign posted detailing the length of the closure. 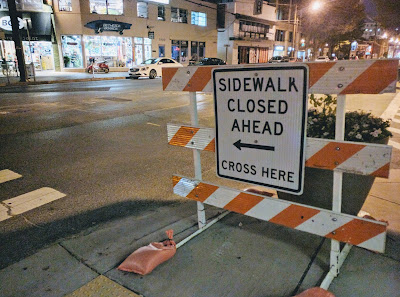 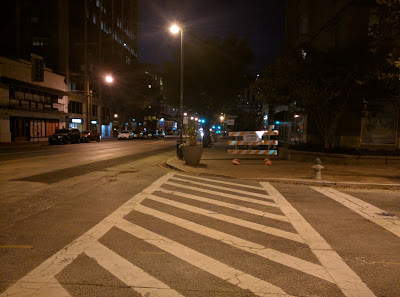 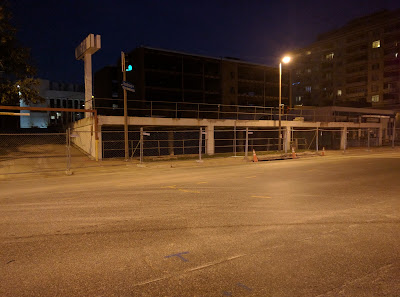 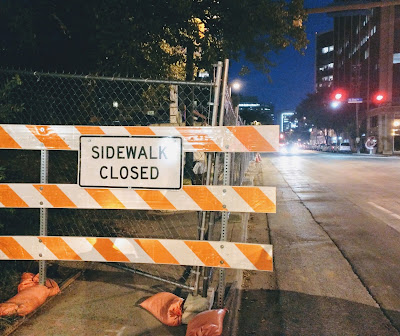 Too bad you weren't there in the daytime. You could have taken some pictures of that accident at Wisconsin and Cheltenham.

yeah the better blog already caught it, he just likes to hangout at Montgomery mall and take pictures

Yup...for that audience that wants to know why traffic was so bad this morning.

#UnsignedDyer @ 10:54 AM - Funny, I don't recall seeing any pictures of "crash victims", just the two cars that were involved in the crash. The article did mention that the two injured drivers were taken to the hospital.

"for that audience that wants to know why traffic was so bad this morning."

You mean Bethesdians who drive to work in the morning?

Downtown Bethesda is a scary place.

Car accident happens outside your office. You creepily took photos... Great!
You expect Dyer to award you an Edward R. Murrow award on the spot for this crap?

What does this mean? The injured drivers had already been taken to hospital when the photos of the damaged cars were taken.

Crap? What crap are you referring to Tim? I read an article that informed me of why I was backed up in traffic today and suddenly they are creepy for telling me that. Dyer has definitely taken much creepier photos than that.

How would Robert Dyer award his competition an Edward R. Murrow Award? How would he award anyone that award?

Sounds like more megalomania on the part of #UnsignedDyer.

Any news on Justice Tuesday?

Did you take a knee?

Shocking: Very same building, but state mandates closures only as needed for pedestrian safety on Wisconsin with a covered walkway, while DPS green lights a full closure with no signs. Well done.

Considering the closure was to build the demanded covered sidewalk.... lol.

5:17: Nope - the whole Woodmont Avenue side is closed, and not for a covered sidewalk construction.

5:51, the article says both sides closed. The Wisconsin side was most certainly closed for the covered sidewalk.