4 Bethesda Metro Center project back on the front burner 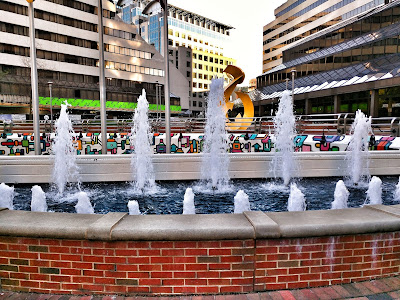 After a couple of years of very public bickering over the future of the plaza at the Bethesda Metro Center, a development project is again being proposed for it. Although the project will be mixed-use, and allowed to be as tall as 290', the developer is not yet stating whether it will be primarily residential or office space.

Instead, the early application will be for up to 500,000 SF of retail/restaurant, residential and/or office space. Whatever the bulk of the building ends up being, largely based on the market, the developer has made clear in the past that retail and restaurant will be on the ground level. Additionally, they have proposed a park space, which has been criticized as too small and too hidden-away by some residents.

A public meeting regarding the proposal has been scheduled for Wednesday, October 11, 2017 at 7:00 PM at the Bethesda Chevy-Chase Regional Services Center, located at 4805 Edgemoor Lane.
Posted by Robert Dyer at 5:30 AM

Development in Bethesda seems to be on a tear, especially on Wisconsin. Five years from now with the Purple Line and all the new mixed-use buildings, it could become a true 24/7 city.

"The developer" by the way is Brookfield Properties.

This is pretty exciting actually. Prime location close to D.C., NoVa, major highways, major airports, and just a short drive to suburbs and countryside if you want to get out of the density.

If only they would just push into Westbard, we could really build up and get those Fortune 500's like Robbie wants.

The plaza is always empty. Something should be done to make it useful and a pleasant place to go. Also, the bus and metro station on the lower level needs to be renovated.