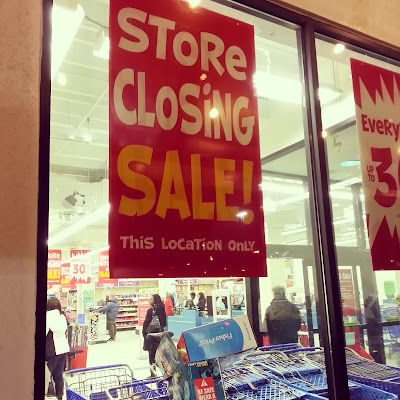 The Dark Side of White Flint, Part 19: 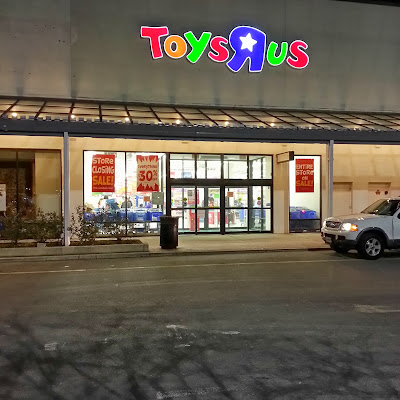 A Christmas shopping visit to the downscaled Toys R Us store on Rockville Pike brought disappointing, if expected, news: the store will close for good sometime next month, according to a store employee. Worst of all, the store is not relocating; it is the end for Toys R Us here. Having split my childhood toy purchases between this location, and the also-demolished Lowen's toy store in downtown Bethesda, this conclusion is certainly a sad one for me. The original Toys R Us structure was already demolished on the other side of the shopping center; this store is essentially a pop-up affair, but still had a decent inventory. As Toys R Us winds down from its final Christmas shopping season, a closing sale is offering modest discounts of 10-30%. Under the sale's terms, there are no refunds or returns. Shelves throughout the store are increasingly bare, and most are not being restocked.

The anti-suburbia activists will say this is no big deal, "change happens, deal with it," and that urbanizing strip malls on Rockville Pike will reduce exhaust emissions. All three arguments are false. 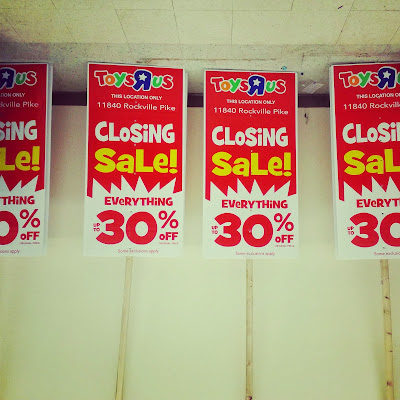 There is no equivalent toy store anywhere in the Bethesda or Rockville area. Furthermore, Toys R Us carries multiple toy lines exclusive to its stores. Having come directly from the nearby Target, I can confirm that the selections are quite different. And when the Toys R Us was fully stocked, there was simply no comparison between the stores. I am a big fan of Target, and shop at several of their stores frequently. But they understandably cannot devote the space or depth to toys that Toys R Us can, given the broader merchandise array of a big box store. The loss of convenience and toy merchandise selection is indeed a "big deal" for downcounty residents.

Change may happen, but in this case, the desire of parents and children to buy toys has not changed. Development decisions cannot be made in a vacuum, but must take into account the needs of current residents, and the general economic best interest of the area. There is no convincing argument for the destruction of a successful commercial area like Rockville Pike. And even less logic behind one that then banishes the longtime businesses whose stores are demolished. Change in Montgomery County today is primarily driven by development interests, even when other business interests are damaged in the process.

Finally, urbanization of White Flint and Rockville Pike is leading to more driving, not less. The patrons of demolished businesses astronomically outnumber the future residents of luxury buildings in the area. When that Hallmark ornament cannot be found in White Flint, or that Toys R Us-exclusive toy must be had for Christmas, shoppers don't deprive themselves - they hit the road. And now their shopping trip burns several times the amount of gas. So we've made our community less convenient (unless your life revolves around $100 restaurant dinners and high-end shopping 365 days a year), and increased auto emissions, to boot.

In what is becoming a "disposable society," there are costs. Welcome to the dark side.


More articles in this series:

The Cheesecake Factory goes dark at White Flint Mall (Photos)
Posted by Robert Dyer at 5:00 AM

"Change may happen, but in this case, the desire of parents and children to buy toys has not changed. Development decisions cannot be made in a vacuum, but must take into account the needs of current residents, and the general economic best interest of the area. There is no convincing argument for the destruction of a successful commercial area like Rockville Pike."

Toys R Us, cornerstone of a "successful commercial area"

That argument will only work when you can buy, for example, individual Hot Wheels cars from the current Toys R Us batch from Amazon. com. You can't even get those from the Toys R Us website.

Nearest Toys R Us will then be in Gaithersburg. Quite a trek from Bethesda.

The real story here is that town that gave birth to Toys R Us and the whole "category killer" concept is no longer going to have a location. Congressional Plaza was the home of the original Toys R Us, wasn't it?

I order online mostly, but amazon and ups have had their problems recently :)

Speaking of which where are there any Toysrus's in the area anymore ?

The only one that comes to mind is in Clinton, Maryland after this one and the one that uses to be in Lanham on Annapolis RD in PG County which closed several years ago after the roof collapsed after a winter storm

le about how much of the amazon packing materials end up in landfills after Christmas:

As an environmentalist, I see having some local retail as a benefit. I haven't heard much in the way of new retail at pike/rose/white flint. Sounds like chain restaurants so far.

"That argument will only work when you can buy, for example, individual Hot Wheels cars from the current Toys R Us batch from Amazon. com. You can't even get those from the Toys R Us website."

Some people might prefer a nice restaurant or a small concert venue or even a Chop't salad place over a Toys 'R Us to buy unique Hot Wheels. Not everybody. Not you (obviously). But some.

That's what you failed to consider when writing this. You don't speak for all of suburbia.

A concert venue like the Fillmore would, but that's not in the cards. I hope the small venue that is being planned will have a line-up that appeals to young folks.

That's funny, because the way the local media, and a relative handful of politicians and activists put it, they speak for all of suburbia. And they tell us there is a consensus that the suburbs are over, and now we have to pave over the entire county. Unfortunately, no such "consensus" was ever reached by residents.

The difference with Toys R Us is that, while North Bethesda already has salad shops and Strathmore, the entire downcounty now has no Toys R Us. So you have a "command economy" intervention by the county council and planning board on behalf of developers, which is actively choosing winners and losers in the marketplace. It hasn't worked in Cuba; it won't work in Montgomery County, either.

Thomas, there is one in Gaithersburg right off I-270 at the Montgomery Village exit. Hence the need for more exhaust emissions to get there.

Andrew, it's possible it could have been there prior to the 70s. In the 70s, this Toys R Us was located further up the Pike, on the east side. Today, the remodeled Toys R Us building is shared by Yekta and Mi Rancho.

The change in land use only occurred because the planning board and county council changed the rules about what could be built there.

If Toys R Us was profitable on the Pike, they could easily relo further down towards Rockville- and that's the point. Maybe that shopping plaza is being rezoned and it did not maje sense or was not possible for a Toys R Us to stay. But jeez, your argument here is purely emotional/nastolgic because (and I'll say it again), they could move down the Pike and into a new updated store. They are choosing not to which means they don't see the economic benefit of staying in the "neighborhood". A shopping strip on the corner of OGT Rd and 355 is a waste of space in such a heavily trafficked intersection.

There's more than nostalgia to my argument - there's the loss of the businesses, and the increase in driving to stores further away. And the impact of that on the local economy and the environment. Toys R Us by nature of its profit margin cannot afford the rents that will be charged at Pike and Rose. There aren't going to be any affordable rents for a full-size Toys R Us down the Pike. Maybe a pop-up inside Montgomery Mall, but there isn't space for a full TRU inventory there.

While this was the ideal place for Toys R Us in the 60s when Rockville Pike was a two-lane country road connecting the small towns of Bethesda and Rockville it doesn't make sense now.

Real estate is too expensive in the "nice" parts of the downcounty for these big box stores to be viable at full size. See our Bethesda home depot with no parking on weekends or our PetSmart that requires a parking garage and elevator.

Yeah, that's a big problem when your advantage is selection/inventory, but you're priced out of the square footage you need to hold the merchandise. Of course, rents would not have increased so sharply, had the zoning not been changed to permit a change in land use.

I know this post is from a while back, but I hope you've since found out there is a small Toys R Us at Montgomery Mall. Sounds like you buy great boy gifts!