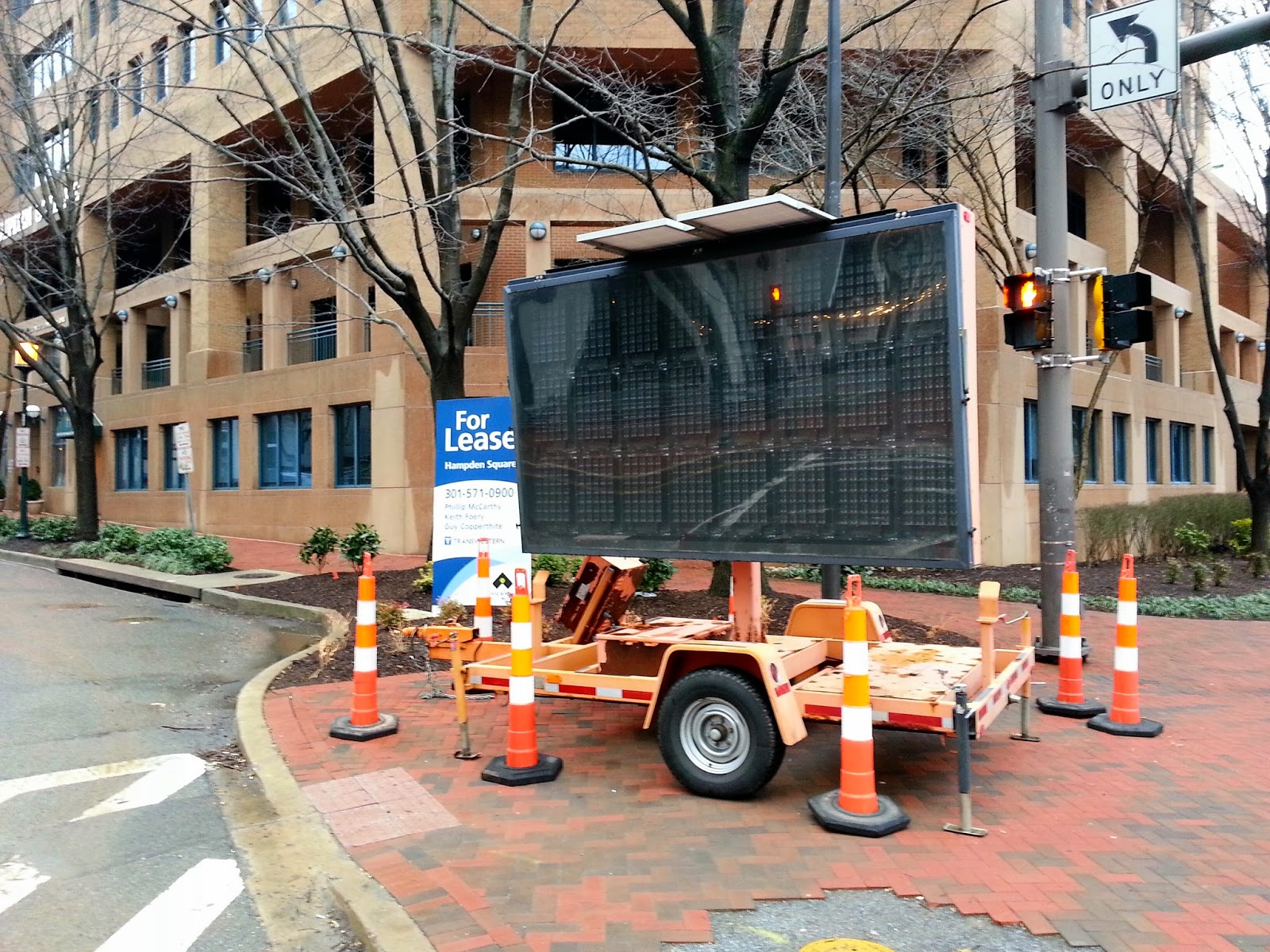 The opening of the new public parking garage at Woodmont and Bethesda Avenues was planned for this month. Installation of the "spaces available" signs at garage entrances, and unveiling of the pedestrian entrances, suggested the day was coming sooner rather than later. But as of this writing, the Department of Transportation has made no formal announcement of a specific opening date. 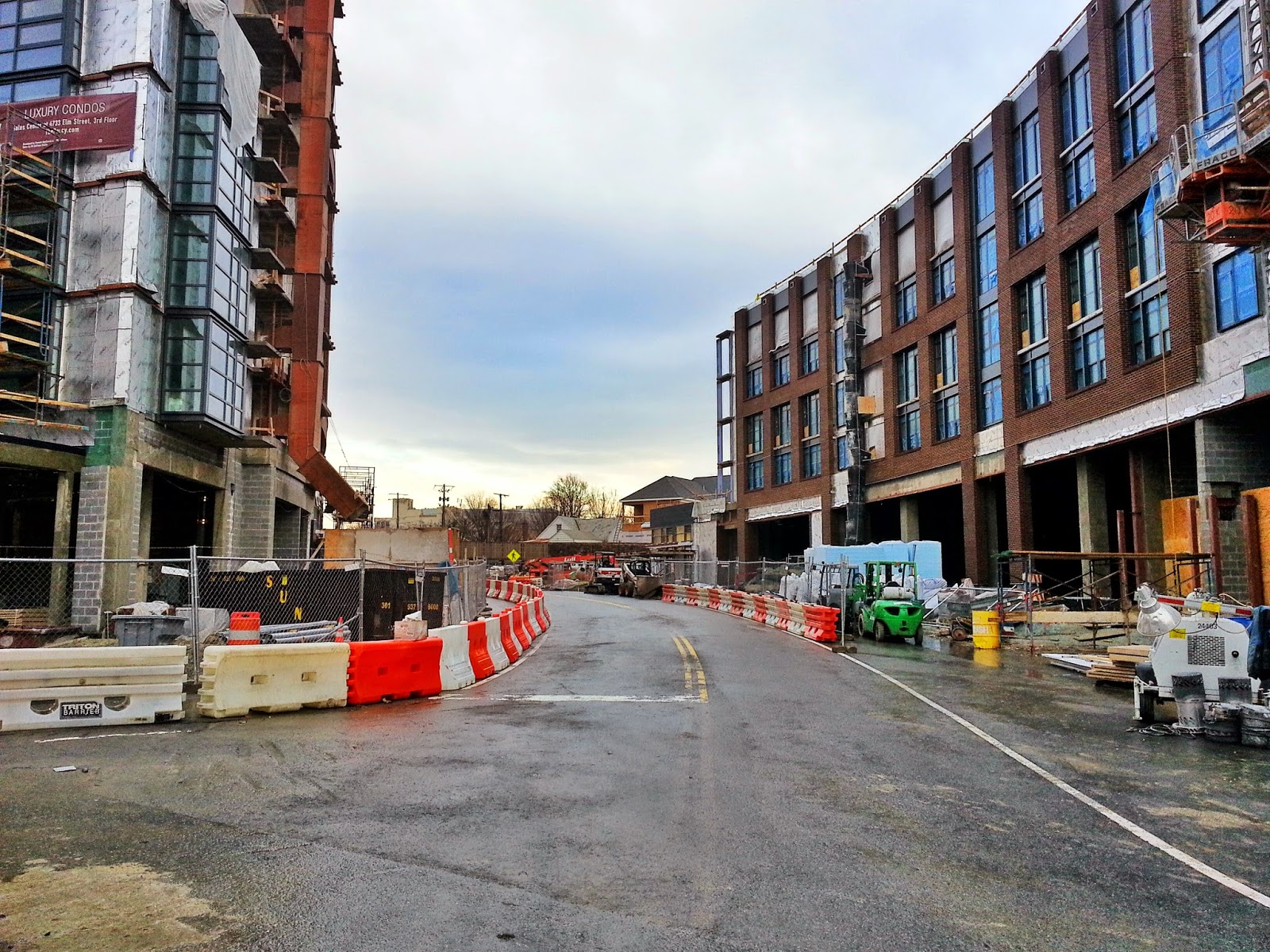 Yet signs of the pending opening are popping up - literally. The infamous electronic signs that gave false hopes of a reopening, when the street wasn't ready for prime time last summer, are back. With blank screens, as of this writing.
Apparently, not all Montgomery County employees were off on Dr. Martin Luther King Day. Another interesting sign popped up Monday at the Lot 31 construction site, which directs pedestrians to the "pedestrian entrances," presumably the ones I've previously shown you. In contrast to previously-posted signage that emphasized that this stretch of Woodmont Avenue was "not publicly maintained," these two signs sport Montgomery County Government logos. 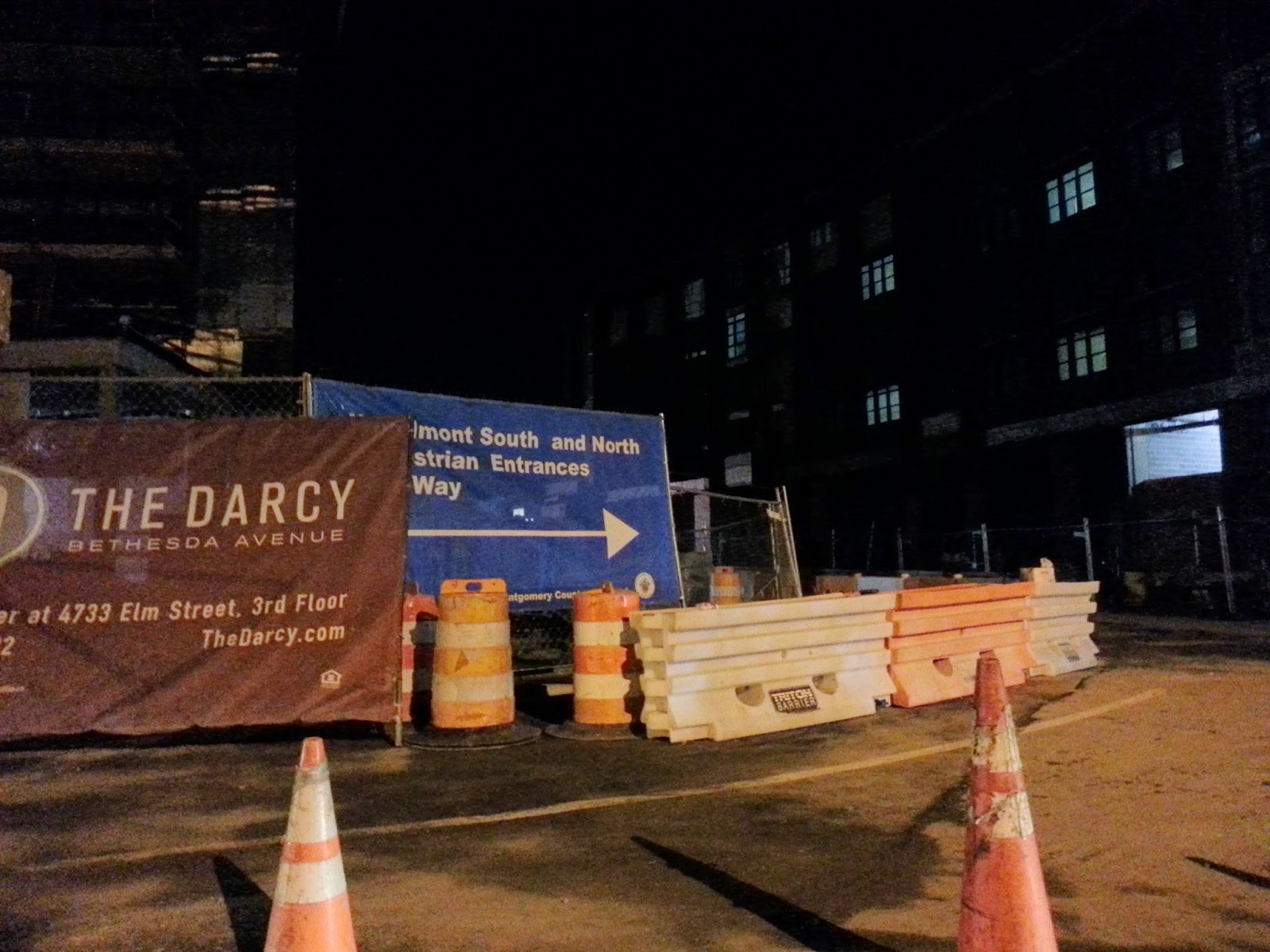 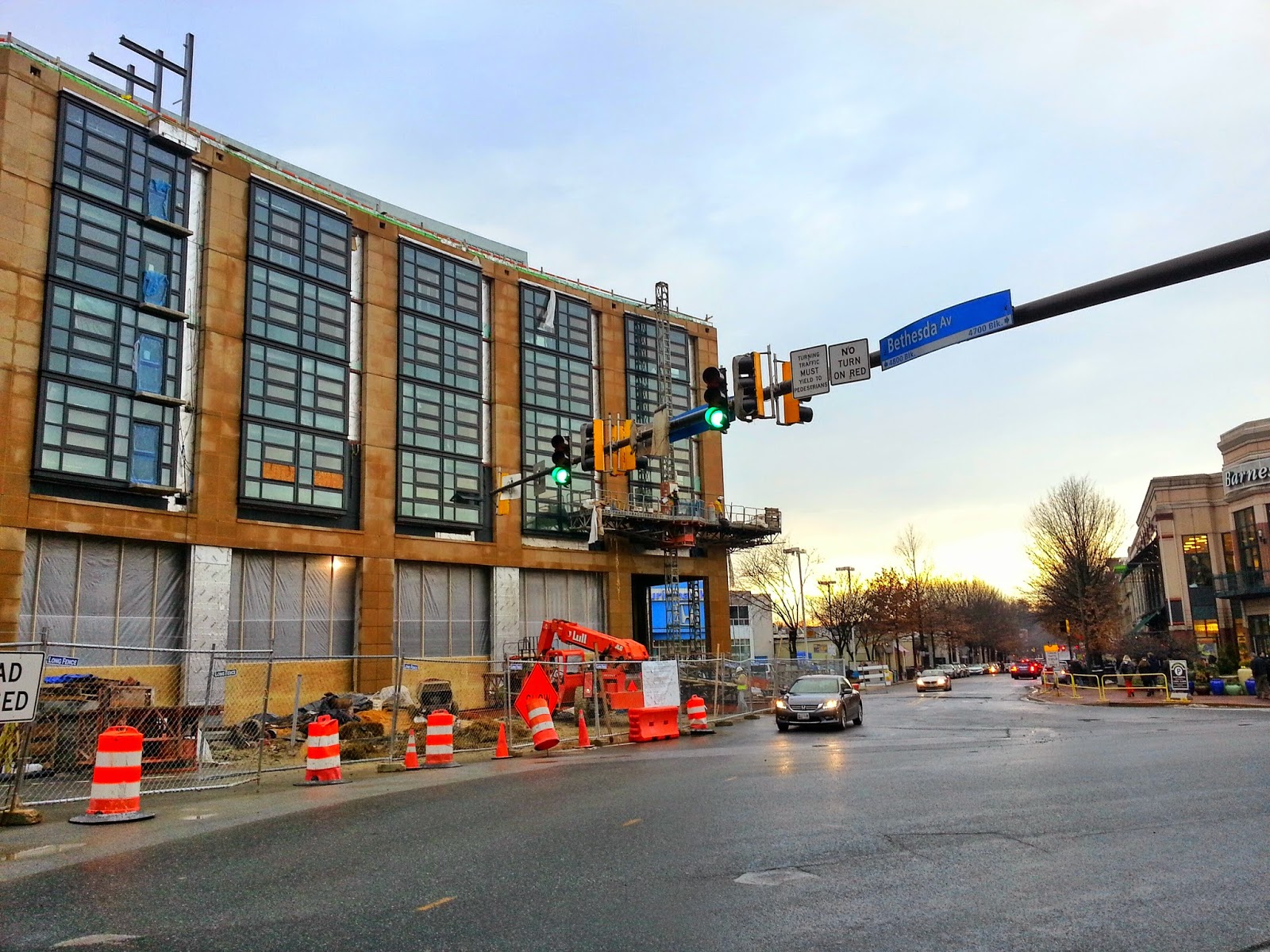 As you can see in these photos, neither sidewalk is currently available. There could be barrier-divided pedestrian paths in the roadway itself, and that would preclude the promised bike lane space, as far as I can measure. But it still doesn't appear ready for prime time today. Remember, while cars could drive in, even those drivers have to walk to their destinations. Can and will the sidewalks reopen when the road reopens? Is the overall facility going to be safe, and will it provide equal access to pedestrians and cyclists, as well as to cars accessing the garage entrances? 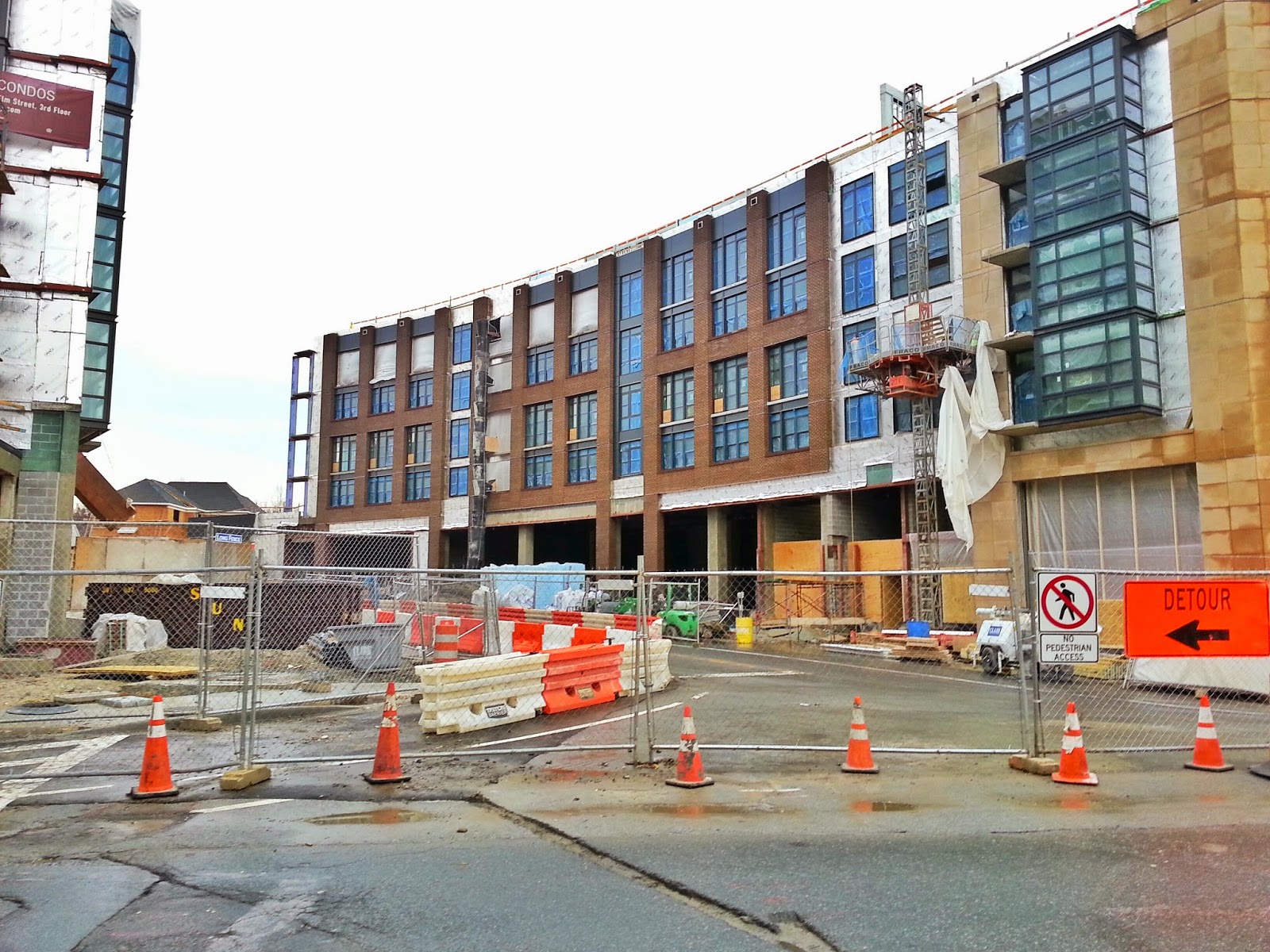 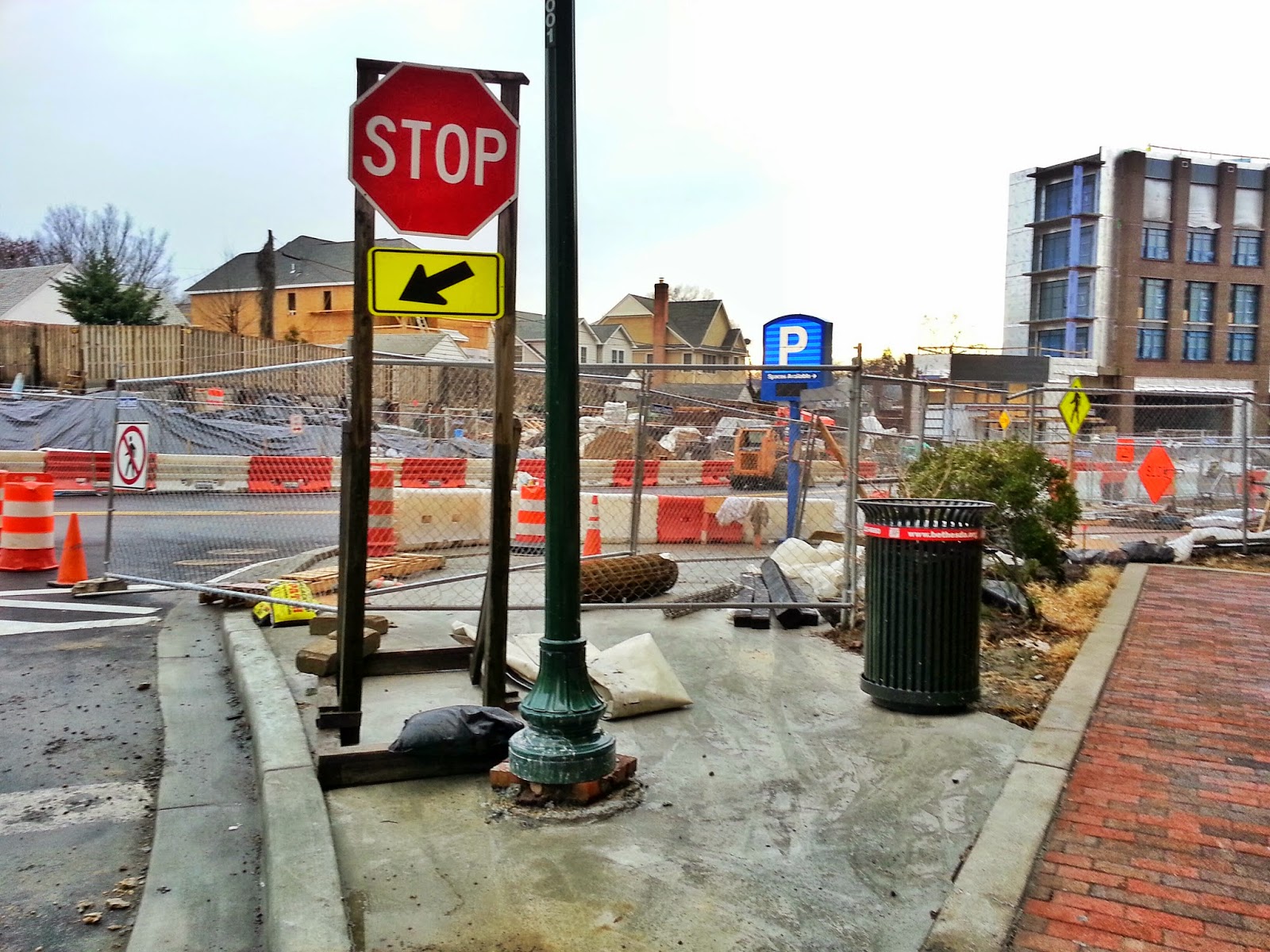 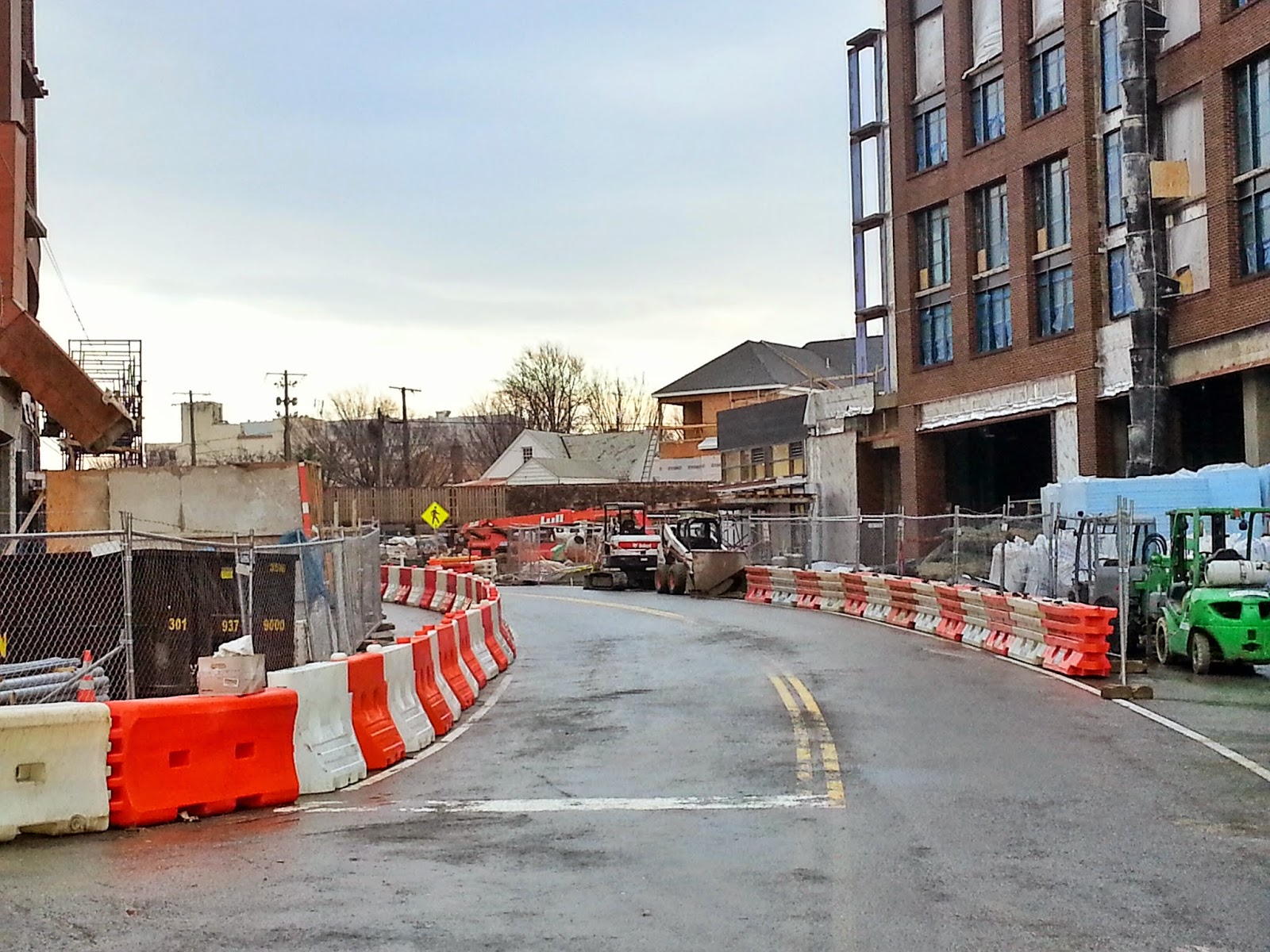 That big ass sign impedes pedestrians trying to use that crosswalk, but I guess it's never about us.

Anonymous said...
This comment has been removed by a blog administrator.
9:27 AM

Nice. Hooray for the road and garage being open (and free until March). Construction is never fun to deal with, but man this is such a huge improvement compared to the deadening surface lots.

Anonymous said...
This comment has been removed by a blog administrator.
10:31 AM

When will Leland St open back up? Plus according to the plans you will no longer be able to make a left turn from Leland to Woodmont in order to access the garage entrance.

Does this means they won't be blocking the intersection of Woodmont and Miller with construction vehicles any more? Or the pedestrian crosswalks next to the porta potties?

Doesn't seem there was much loss with the closing of Woodmont other than Leland access. What's the goal of Woodmont drivers going south and connecting to 355 there that they can't take Bethesda Avenue like they did when Woodmont was closed?

Traffic flow seemed ok at that intersection during the temporary rerouting.

Anonymous said...
This comment has been removed by a blog administrator.
7:45 PM

Will the county provide the new parking garage security cameras and security guards? How long before cars wheels are stolen from lower levels or lower level muggings (This is currently happening more regularly around the Bethesda Area). Please protect our residents.

Deleting offensive comments, ads for people's personal blogs and totally off topic remarks is welcomed by this reader.

That electronic sign shown in your first photo BLOCKS the pedestrian walk signal. The county should be notified about this since that is a dangerous cross for pedestrians anyway.