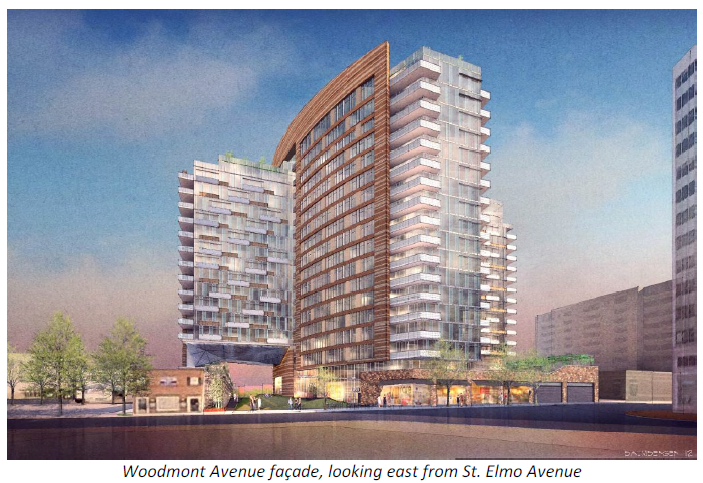 The speculation as to when construction will begin on the JBG Companies' 7900 Wisconsin mixed-use project continues. But JBG has just informed adjoining property owners at Fairmont Plaza that the project is now temporarily on hold, while the development firm seeks a joint partner.

On JBG's to-do list during this delay is obtaining a construction loan, and naming a general contractor for the project. As a result, the firm expects construction to now start in June or July, at the earliest. Previously, the plan was to begin demolitions of existing structures on the property this month. The anchor retail tenant at 7900 is expected to be a Trader Joe's grocery store.
What has led to some speculation is the matter of Fitness First, a gym tenant in the existing Wisconsin Avenue office building on the property. Fitness First has not only publicly said it has a lease until 2019, but recently began a expansion of its facility - not something a business would ordinarily do if it was going to be demolished in 2015. At the same time, JBG has maintained all along that it has the right to demolish that structure, even having applied for demolition permits from Montgomery County last year. Next door to Fitness First, Parvizian Fine Rugs has said its space is being demolished, and it is moving down Wisconsin Avenue and remaining in Bethesda.

Among concerns expressed by residents of Fairmont Plaza are traffic flow around the affected streets, and ensuring access to the condominium building's parking garage remains unobstructed during construction.

One aspect of this project not in question, is that it will bring some distinctive and impressive architecture to this currently-dead space along Woodmont Avenue.

Renderings via Montgomery County Planning Department/JBG
All rights reserved by JBG
Posted by Robert Dyer at 5:00 AM

So you crashed the Fairmont Plaza owners meeting is what I take from this...

Fitness First is not expanding, they put a sign on the window next store to bring attention to the matter. check your facts.

As I said in the past, Fitness first will not announce they are closing until the day they close and people are standing outside at 5 am wondering where their gym went.

with this delay they won't have to stand out in the cold.

5:51: I didn't say Fitness First was, or was not, closing. That's what the controversy is all about. An actual employee explained about the gym's expansion plan. It wasn't just a sign. But Fitness First is not the main topic of this article.

Come on guys, this is a good straight article by Robert. Keep up the good work!

I think this "closing/not closing" issue is a ploy by Hans Riemer to gaslight Dyer once again.

Good reporting! First on the case. I was wondering why that space seemed to be taking so long.