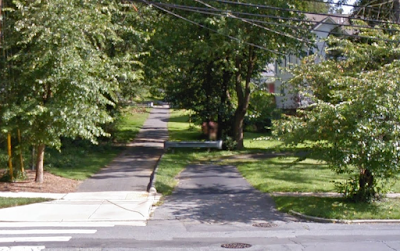 A homeowner on Roosevelt Street in Bethesda is asking Montgomery County to abandon a part of a right-of-way the County owns alongside his property. An unbuilt portion of Grant Street between Roosevelt and Moorland Lane, the right-of-way currently has a bike path running through it. It is identified on some biking maps as part of a connecting bicycle route between downtown Bethesda and the Bethesda Trolley Trail.

The homeowner currently has a driveway on 18' of the 50' right-of-way, and that is the part he is asking the County to relinquish. Abandonment would have no impact on the current trail, which would remain in place.

A public hearing has been scheduled for a representative of County Executive Ike Leggett to consider the application. The hearing will be held on Wednesday, June 22, 2016 at 7:30 PM in the Lobby Auditorium of the Executive Office Building, at 101 Monroe Street in Rockville.

So basically he's asking the county to give him the land for free?

6:15: I'm not a land-use attorney, but that would seem one way to describe it.

I live nearby so was concerned and talked to the county.

The homeowner already owns the land. The county has a right of way easement to use the area as a road that will never be built. The homeowner is asking that the county reflect that it will only be a path and not a road and that it does not need as large an easement. The path will stay and the easement would just be reduced to what they need for a path as opposed to a road.

No shit you're not a land use attorney, birdbrain!