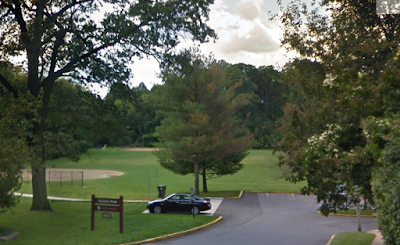 A group of Bethesda residents have started an online petition asking Montgomery County and Montgomery County Public Schools to remove Ayrlawn Park at 5652 Oakmont Avenue from consideration as a future school site. The park is not only used by the community, but also by programs at the nearby YMCA.

This is a classic example of how our corrupt, developer-funded elected officials lower costs for those developers at residents' expense. No park of any kind should ever be under consideration as a school site. If development leads to school overcrowding, the developers clearly need to contribute more, either in impact taxes or by providing land on-site or off for new schools. Currently we don't have councilmembers ethical enough to have such clarity on the vital importance of parks - probably because each of the nine councilmembers has accepted thousands of dollars from their developer sugar daddies.

We recently heard more fake news from the County Council alleging that single-family homes and tear-down replacement SFHs are somehow escaping paying their fair share in taxes. Not true. In fact, the County's own numbers state that townhomes are now the highest-student-generating form of housing, and have been approved en masse by the same blabbermouths now seeking another tax on small business developers who specialize in tear-down redevelopment. Multi-family housing is driving school overcrowding - over half of Bethesda-Chevy Chase High School students live in apartments, as just one example.

It's no surprise that the same urban-oriented developers and their puppets on the Council would want to run the small home developers out of business and discourage redevelopment that perpetuates SFH suburban neighborhoods. Both are planning to apply multi-family zoning to those existing, successful neighborhoods as I type this. And they'll do it, unless the public wakes up and lowers the boom on them.
Posted by Robert Dyer at 5:30 AM

Why no mention of the fact that this site used to be an elementary school?

You and your fellow NIMBYs constantly wring your hands about "overcrowding" in our County schools, but do nothing to actually solve it.

Saith Dyer: "No park of any kind should ever be under consideration as a school site"

Says the guy who wants to build freeways through Wheaton Regional Park and other parks in our county.

The only reason that Ayrlawn "Park" exists, is because of the elementary school that stood there for several decades.

According to your logic, if existing parks are off the table for new schools, even if they are former schools, then I guess they will have to use eminent domaine to acquire and tear down existing single family housing to expand the school system.

The PARK is not under consideration for the school plan. Just the building, the tiny swath of land behind it, and the existing, fenced Y playground. The part that is AYRLAWN PARK will stay parkland.

Try reading the plan instead of just posting whatever the NIMBYs say. I live in that neighborhood and we need the school more than we need the daycare.

And Robert thinks that all development anywhere in Virginia or Tennessee is super-awesome.

So let me get this straight....a former school becomes a recreation center and now people are outraged it could become a school again? These are the people who are never truly happy in life. Their life sucks so they constantly drag others down.

Imagine if Fairfax County had done the exact same thing. Dyer would be praising them for their ingenuity.

9:02: Nope - Fairfax is actually on a trajectory to decline, with Montgomery County refugees voting the same dumb way they did here before fleeing their own politicians. Too bad we have a neo-Communist County Council and won't be able to capitalize on Northern Virginia's turn toward hair-on-fire radical politics, and that NoVa has so much more revenue to cushion their fall, from all the high-wage jobs they have that we don't.

Now that Fairfax is in decline, who are you gonna compare MoCo to?

"Montgomery County refugees voting the same dumb way they did here before fleeing their own politicians."

So...you're saying that the Democrats flipped Virginia this month just because of the votes of former Montgomery County residents who now live in Virginia?

@12:29 Yup. Just like the "friends of the capital crescent trail" protested the Purple Line, which was taking a former CSX train line, that was changed to a walking path, and having it used for trains again.

Remember when the Post didn't write a single sentence about the general election Montgomery County Council at-large race - and didn't even make endorsements?

Why are you complaining that The Post didn't endorse Albornoz, Glass, Jawando and Riemer? You would have whined endlessly if they had done so.

8:26: A majority of the population growth in both jurisdictions has been illegal immigrants. The main difference is that NoVa also enjoyed an influx of wealthy and ultra-wealthy MoCo residents into their tax base, thanks to our high cost of living and high taxes. Montgomery's major problem is that the population growth is mostly too low income to cover the exploding costs of services they require.

7:14: It showed that they knew they would have to endorse me if they gave an honest assessment of Riemer, jawando and Glass' thin resumes and lack of accomplishments. At least Gabe showed he could run a major department in government. The other candidates on the GOP side weren't even actively campaigning. I was the only credible Republican candidate with mainstream, common sense proposals to address the many crises we face, and the ed board knew that.

Saith Dyer: "A majority of the population growth in both jurisdictions has been illegal immigrants."