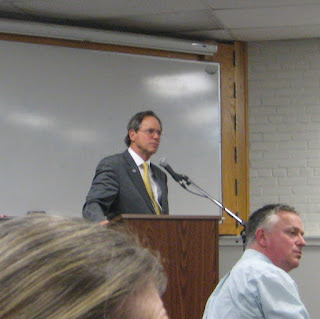 The alternative Westbard sector plan concept put forward by Montgomery County Councilmember Roger Berliner (D - District 1) would scale back many aspects of the plan forwarded to the Council by the Planning Board. But it doesn't go far enough for many residents who live near the area slated for redevelopment. The Citizens Coordinating Committee on Friendship Heights passed a resolution last week supporting the "Berliner alternative," but only if further changes are made to it. Some in the community who oppose the still-sizable Berliner plan are worried that, if those changes don't go far enough, that a CCCFH approval will be misinterpreted as community approval of it.

"The concern is that the Berliner Option will be viewed as 'the community-approved' baseline for further discussion in the eyes of the PHED Committee and the Montgomery County Council as a whole," Sumner resident Dennis Collins said in an email. Collins has prepared a detailed analysis of both the Planning Board draft, and the Berliner alternative.

"Is the Berliner option for you? NO!" says Save Westbard, a citizen organization seeking to retain the neighborhood's suburban, low-density residential character, in a new email. Citing Berliner's endorsement of urban living, and his promise that Westbard area residents will like it too, Save Westbard asks, "How does his experience have anything to do with our experience? If we liked and wanted to live in a mixed-use development, we would choose to move to Mr. Berliner’s neighborhood."

Collins says Berliner's plan still proposes an "absurd" amount of affordable housing in a location far from mass transit and services low-income residents need. He correctly notes that the current methodology the County uses to measure road capacity and congestion is highly inaccurate (I would add that the inaccuracy is very intentional, to allow more development). Moreover, he argues, the density and building heights Berliner endorses remain out of scale with the neighborhood around it. Collins advocates for a 50' height cap on new buildings, and 35' near existing single-family homes and townhomes.

Overall, Save Westbard and Collins are suggesting limiting the amount of new residential units to the 580 currently allowed under the 1982 Westbard sector plan. It's important to note, that all of the numbers and heights in these various plans are only a starting point. Even at 50', developers can obtain additional height and density using the bonus scheme approved by the County Council.

Also, while Berliner's plan does call for a senior center in the new Westwood Shopping Center, I would personally still like to see a recreation center for all ages somewhere in the plan - and it doesn't necessarily have to be on Equity One property.

The community has done well so far in staying united, and very effectively opposing the Planning Board version of the plan. It should be certain that any final Berliner alternative, which still has to be accepted by his colleagues on the Council, is in line with the desires of the neighborhood before it gets any official endorsement.

We don't want to end up in a situation like the Little Falls Place disaster, where EYA (ironically a partner with Equity One on their Westbard redevelopment project) represented a CCCFH endorsement as a community endorsement throughout the approval process. In reality, not a single public meeting was ever held by EYA on that proposal, as company president Bob Youngentob acknowledged under oath at a hearing before the County hearing examiner.
Posted by Robert Dyer at 7:00 AM

#1 Bob Youngtroub is an entitled douche and all of EYA's developments are the same floor plans with different siding on the exterior.
#2 "Community Centers" are great in theory, but other than places for Concerned Citizens meetings and the occasional bake sale, I have to question their functional value, perhaps the space would be better served as a public park or some sort of more active and engaging amenity.

What these senior citizens don't understand is that these sector plans are for the next 30+ years; the entire point is to take a long term view of the area and anticipate what future generations want and need. People saying the 1982 Westbard sector plan should effectively remain intact are simply delusional. Times change. If you're not going to be alive in 20 years then your opinion on what Westbard should look like then literally means nothing.

The telling part is:
"anticipate what future generations want and need"
Maybe they all won't want the same thing.

How ridiculous to assuming Westbard residents are those who "won't be alive in 20 years."

And who knows? In 20 years they may be thinking, what the heck were they thinking in the 2010s?

The Potomac Community Rec Center is always crowded and a great resource. It would be great to have something like that in Westbard.

Westbard is a family oriented area, so more rec/community centers would do well!

"Maybe they all won't want the same thing."

What, people in future generations won't want a place to live and will want a bunch of decrepit storage facilities?

Thanks for the honest reporting, Robert Dyer. Many of our seniors are concerned for their children and grandchildren, some of whom may live here in the future. Their views and opinions are very much appreciated and valued by the wider Westbard community. I'm 49 years old and I'm not delusional -- just concerned, like so many others who live in the Westbard area.

What about the large pile of burning tires? I hope that does not get removed under his plan.

We have a community center in Friendship Heights except that we really cannot use it because there is no parking.

Berliner is so arrogant telling us that we will like Mixed use living. I tried it and never want to experience it again. If you want to live in a place that has no character and is noisy, and is full of renters and transient population, go ahead but don't expect me to like it.

Why don't you try walking there, you lazy bum?

3:05 I think you just really won't be liking it and unfortunately with the need for this growth there's not much to be done except finding an area more suitable to your preferences. Growth is coming no matter if we like it or not.

Growth is coming no matter if we like it or not

And the county seems determined to make it what won't be liked and ignoring all community input.

I can't wait for the redevelopment. Bought my house in Fort Sumner 2 years ago mostly because of this future redevelopment and the awesome quality of life it will bring. There are lots of people like me. We love this community and our neighbors. See all those bulldozed houses in Sumner and Woodacres and Glen Echo Heights with new builds? We all would have bought in Edgemore if we could have afforded it. The previous owners of our properties are a roster of SaveWestbard and neighborhood complainers. Get over it. Neighborhood is changing and most of us are happy about it. Go back to worrying about why your uncertified mail delivery was delayed during the snow storm.

1:39: How exactly does "growth come if we like it or not?" If you don't build the housing, the people can't come.

3:53: You may be in favor, but how do you figure "most of us are happy about it?" There are 23,000 messages against the plan, and a few hundred in favor, most of which are from people far from the redevelopment site or even in DC.

There's been no public forum or paper trail that shows "most" are in favor. How do you explain that?

Welcome to the neighborhood! We are glad that you've joined us here and we are glad you're happy in the community.

Please know that while you've been here for two years, many of us have lived here for decades. (Personally, I have lived here my entire life, but for a very brief period after grad school; but, I've always thought of Westbard as home, even during that brief time). The wisdom of those who have lived here for a very long time should not be easily discounted. We might know something about over-crowded schools and traffic patterns on River Rd. and Mass Ave.

SaveWestbard is not against development per se. We are against over-development. In all my time working on Westbard development ... not once have I heard anyone say that Westbard is just perfect as is. No. On the contrary, everyone wants Westbard upgraded. It is simply a matter of how much development can this community withstand.

The Berliner option, as it stands, recommends 1200 new residential units. As Mr. Dyer has explained, even if this number were accepted by the community as a "baseline," that number will float up considerably based upon developer loop-holes which the can and will exercise. Plus, just as a point of reference, 1200 new units is the equivalent of ALL of Springfield (650 units) PLUS ALL of Sumner (550 units) being added to the small Westbard sector.

Please give your fellow residents the benefit of the doubt. We've been involved for a very long time in this issue, and we have something to say about it. The County Council is trying to ignore us, but we will keep speaking.

Final thought: if you have young children (forgive me if I have extrapolated too much here), your neighbors are doing you a great favor by fighting this plan. Our schools are already overcrowded. Plus, area children (mine included) have enjoyed our delightful library location for many, many years. Zoning for 200 affordable units at this library site alone should be cause enough to get involved and let the County Council know what you think.

All the best and kind regards.

Please do email me at westbardconcernedcitizens@gmail.com if you would like to keep informed about the Westbard project.

If you really want to make a contribution to the development of the Westbard Sector and to the shopping center, make concrete suggestions that can be debated. Simply opposing what has been proposed is a non-productive activity, reminiscent of the Republican members of Congress.

4:25: Most of the opponents HAVE made common-sense suggestions - stick to the existing height/density limits in the new development (45-50'). Respect the suburban residential character of the neighborhood. Put specific school and road capacity projects into the plan, so that they will be eligible for funding in the CIP in the future. Just to name a few.

What are your specific suggestions? Complaining that others aren't doing enough or are somehow obstructionist is odd, unless you're producing some suggestions yourself for this development debacle?

Opponents have been very clear about what needs to be done/not done. Your neighbors who are fighting over-development are helping you, whether you realize this or not. Also, "debates" have been raging for a year and a half already; are you unaware of this fact? If opponents had not engaged on this issue, the end-result would surely be worse for everyone.

Well, I'll leave this particular combox convo; but I do invite you to email me and get involved, if you are interested (see contact above).