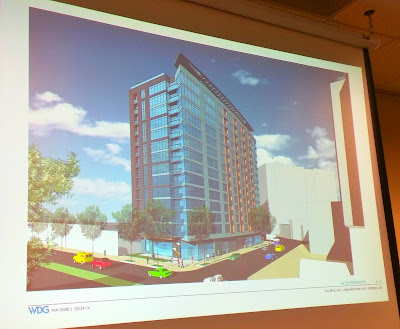 Many aspects of the 8008 Wisconsin mixed-use project in downtown Bethesda will remain the same under new developer Toll Brothers City Living. But where it counts, the new plan is an upgrade for the Woodmont Triangle neighborhood, with the additional retail square footage added.

Attorney Emily Vaias represented Toll Brothers at a public meeting on the project last night at the Bethesda-Chevy Chase Regional Services Center. The property in question currently holds several structures along Wisconsin, Cordell and Woodmont Avenues, including the "Beer House" and a vacant surplus store.

As you can see in the above schematic, there is now going to be retail space fronting the Wisconsin Avenue side of the building (the red colored section). Original developer Douglas Development had planned to rely on the lobby to activate the street along Wisconsin, an idea panned by some in the neighborhood.

In addition to the much-needed added retail, Toll Brothers is also adding more parking. The underground garage will now be three levels. Douglas had counted on a parking exemption, due to the site's location in the urban parking district.

As I previously reported, now that Toll Brothers is taking the building condo rather than rentals, the number of units will decrease to 106, while the square footage of each unit will increase. The typical unit size has not yet been determined, however.

You may recall that County officials obsessed with the foolish Bus Rapid Transit proposal arbitrarily tried to extort concessions from Douglas, holding up the project for many months. Toll Brothers now inherits the building geometry eventually agreed to by Douglas. It's unclear how much of a role the County's interference played in Douglas' sudden sale of the property to Toll Brothers in December.

The architect is still WDG, and the renderings of the building will look familiar to anyone who was following the Douglas iteration of the 14-story building.

Vaias said Toll is going to file the project's site plan, and an amendment, with the Montgomery County Planning Department in the next 30-60 days. She said they hope to have a hearing before the Planning Board in June or July. With timely approvals, construction could begin in the second quarter of 2017.

In other Toll Brothers City Living news, the developer announced last night that its Hampden Row project is now expected to deliver in January 2017. 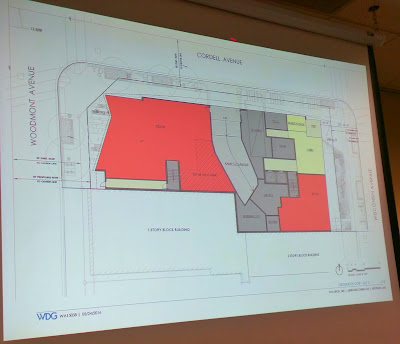 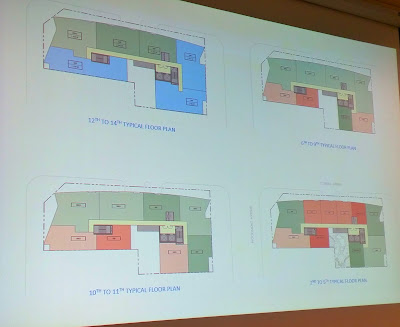 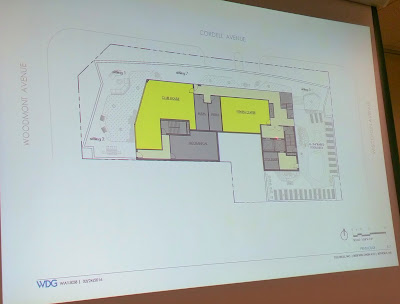 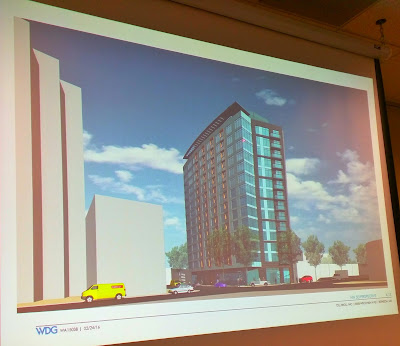 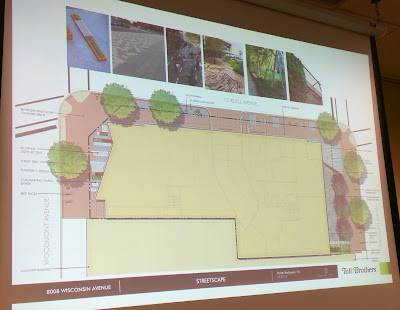 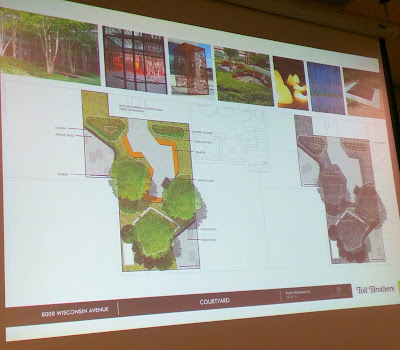 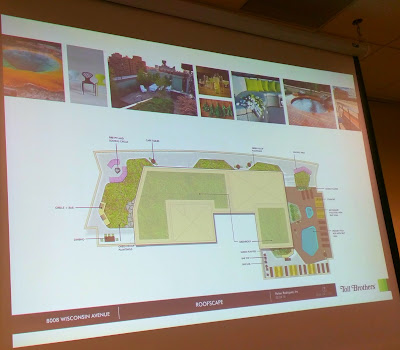 This is great, glad +1 for the retail. Looks like Hans Riemer's efforts are really starting to pay off!

Glad to see some condos come on board for this end of Bethesda. Hopefully some long term vested residents will bring things up a bit. A couple thoughts...

- how do condo owners feel buying with a transitional housing project right across the street?
- wonder what their price point will be? We saw the Norfolk building struggle with condo sales (although they had a few other issues)
- awesome for more retail. A lobby activating the street was a joke before
- awesome for more parking. Condo owners will be more likely to have cars than apartment dwellers, even if they do commute by mass transit.
- BRT right in front of your condo could be a nice selling point for commuters but it's also going to mean lots of strangers standing around smoking, leaving trash, etc in front of your home.

7:04: Hans Riemer has nothing to do with this project.

Hans Riemer had as much to do with this project as he had to do with any bar closings.

Some reading for the author regarding indoor shopping malls:

These are facts, not anecdotes and misguided opinions.

Hans Reimer is your god Dyer ... either worship him or go to hell!

Dyer is unworthy to even mention the name of Hans - our lord, our savior, our true leader!

9:17 AM Bethesda/Chevy Chase is not the rest of the country.
Didn't Dyer report that Westfield execs said that Montgomery Mall is having it's most success ever?

Would imagine Montgomery Mall is doing more sales now as reported yes. But higher sales does not always equal higher profits. do we know the numbers for that?

I'm all for montgomery mall doing well. Hopefully they do some of the nearby projects sooner than later too. Adding some housing beyond Eyas couple of townhouses would be nice.

Montgomery Mall and Tysons Corner are two malls out of thousands nationwide. Anecdotes, in other words.

And Montgomery Mall has seen the handwriting on the wall, and is now transforming itself from a fully enclosed mall to one that opens to the outside

Montgomery Mall is having record sales numbers because they finally wised up and added some upscale stores. This will naturally increase their sales per square foot. I rang our accountant, and in just the last year we have done a lot in helping the mall reach this delightful new record:

That is $139,355 in sales. If you add up the square footage of all those stores, you can see the mall is doing very well. And we are just one family! Multiply that many times over and you can see that this is a great time for the mall. They certainly could not see those sort of numbers with Sears as their most progressive store.

IM GOIN TA KIEHLS AND GET ME SOME TOILET PAPER

As humorous as this comment is intended to be, it does raise a good point about the highest sales ever. Looking beyond just the touted number, there could be many factors such as higher end stores. The other comment about higher sales not necessarily equating higher profits is a good point too. We would need to know more data to properly analyze if Montgomery Mall is doing well or not. None of us here can know other than anecdotally and anyone who says otherwise either knows something we don't and isn't sharing or is just guessing.

12:18 makes a very good point. I mean the mall has a 'store' that sells $100,000 cars. Obviously no one comes to the mall to pick up their new Tesla, but if the original sales lead came from the mall location, do they then take the resulting dealer transaction and count it as mall sales?

I mean someone has to be buying a Tesla after visiting the mall store, otherwise it wouldn't be there.

@9:49am
When the competition up Old Georgetown Road gets demolished and you add "non-traditional mall" draws such as a luxury movie theater and luxury car dealer, something would be seriously wrong if they didn't have a "record year."

There have been at least 10 malls in the Baltimore-Washington area that have closed, been redeveloped, or are slated to close in the last 10 years alone, and 0 openings in over two decades.

Westfield CEO: “I don’t recall the last department store we opened,” Lowy said, adding, “There’s too much retail real estate in the U.S. and it’s provided too much supply..."

Moribund DC office buildings to be replaced with apartments:

The last free-standing suburban enclosed mall to be built in the Washington metro area was Fair Oaks in 1980. Wheaton Plaza, originally open-air, was enclosed in 1982. The Tysons Galleria was built across the street from Tysons Corner Center in 1988. The Fashion Centre at Pentagon City was built in 1989, in a newly developed urban area.

So it's been between 27 and 36 years since any new enclosed mall has opened in the Washington Metro area.

7:27: That's purely because developers have bought off elected officials and rammed through zoning changes. You couldn't build a town center on a suburban tract when all those malls were built.

Now you can, and - surprise - developers are going for the bigger profits of residential. Hardly an indictment of the enclosed mall concept.

That would be in your opinion. Can you provide supporting evidence?

Regardless of your findings, it still doesn't change the points being made about the status of malls.

Correlation does not necessarily equal causation. But I ask nicely if you could help explain that further.

Which developers "bought off" council members who had a say in the new zoning changes? (I think you mentioned the donors before)

So if developers are choosing more profitable town centers over malls, doesn't that say that in their mind and the consumer's mind the town center is more desirable?

And if anything, it still doesn't change the fact that malls are dying all over the place. I hope Tysons and Montgomery Mall do well enough to continue operating but they may be more exceptions to the rule.

So Mr. Dyer is a socialist now. Developers are given more flexibility to build a more sustainable mix of uses instead of single-use monolith malls surrounded by seas of parking, but he wants to force them to build malls.

So, Robert has on the record remarks from Westfield execs about how well they're doing at Montgomery.

Anonymous has his personal feelings and speculation.

What zoning provisions previously prevented developers from building town centers? I would love to hear this.,,

Who here has said that Montgomery Mall isn't doing well? Your reading comprehension is as bad as Dyer's.

Westfield is using Montgomery and a handful of other malls to follow what the industry believes is the next step in malls. Affluent area, entertainment venues, rotating trendy stores, varied restaurant selections, exterior exposure, events. Get people in and keep them there. If(when) Sears goes, we'll see which direction they go with the space.

While not knowing Montgomery Co specifically, property is zoned into commercial and residential uses, so a commercial building cannot be built in a residential neighborhood and vice versa, unless there is a change (sometimes minor) in zoning ordinances. Mixed use requires specific zoning requirements.

At some point, it will be "enclosed town centers" - actually already on the boards.

6:43: Uh, how would you build residential in a commercial zone?

And that's the only thing Dyer responds to and says without substance. Typical. Avoiding the tough questions. Maybe he should be a councilmember after all.

Which zoning code changes? It may require 100s of zoning variances, amendments, exceptions. Density, parking, commercial/residential percentages, all the way to even signage and lighting.