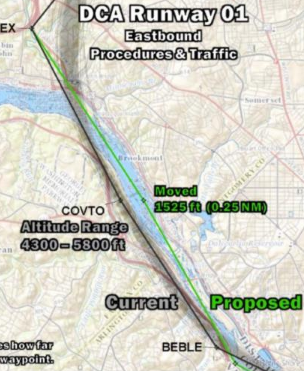 Updated 12:00 AM September 3: The meeting location has been moved to downtown Bethesda due to "Back to School Night" at Westland MS. Please note the new location below

A public workshop will be held on September 15 to discuss a proposed flight path change from Reagan National Airport along the Potomac River. The meeting will be held at 6:30 PM at the Bethesda-Chevy Chase Regional Services Center, which is located at 4805 Edgemoor Lane in Bethesda.

Under the proposed change, the path of jets departing Reagan National would move 1525' closer to the Maryland side of the Potomac from its current departure route. Essentially, neighborhoods in McLean would get a relative break at Bethesda and Palisades residents' expense (though, considering both communities are very wealthy, one has to wonder what would tip the political scales in any particular direction in this case). In official terms, however, the change is part of the NextGen program that the Federal Aviation Administration expects to have significant environmental and efficiency benefits.

Among those predicted benefits, the FAA says, will be the saving of 2.1 million gallons of jet fuel, and 18200 metric tons of carbon. The new flight paths will also improve on-time performance of airlines operating out of major U.S. cities, the agency forecasts.

The FAA says its "noise modeling" of May 2016 tells them that "there would be no significant noise impact" on communities near the new flight path. It should be noted that computer modeling is not the same as measuring actual noise levels in the real world environment.

Attendees will be able to speak individually with experts, and comment on the proposed flight path change. Those comments will be reviewed by the FAA before it makes its final determination this fall.

Map courtesy FAA
Posted by Robert Dyer at 5:00 AM

Are you for or against this Robert?

They are doing this to avoid the ghost of Vincent Foster in Fort Marcy Park.

You won't learn news like this from the Glossy Magazine.

I heard they were doing it because they wanted the pilots and passengers to have better views of Westbard!

9:16: True - stories about donkey collections are clearly of more use to the community than ones about FAA flight patterns that may affect the quality of life in some Bethesda neighborhoods.

6:55: Having grown up on that side of Bethesda, I am used to the jets. I guess my only question would be how much louder they will be, and how accurate the noise model is.

Anonymous said...
This comment has been removed by a blog administrator.
12:06 PM

Dyer doesn't talk about the magazine, but you keep bringing it up in the comments. Many of those Magazine stories you list were reported by Dyer days ago, so you're hardly helping your cause by touting that old news here.
Dyer isn't the one insulting readers, calling them "unics" and such. But you are anonymously insulting Dyer and his readers daily.

You like your old media magazine. Great! No one really cares, so stop bringing it up. Stop lying about Olympics coverage when the magazine doesn't have anyone covering it in Brazil. You sound nuts.

How does that seemingly slight change save over 2 million gallons of jet fuel. What is the rest of the story.

This flight path change (lazir B) has nothing to do with nextgen. What we have right now (Lazir 5) is already a nextgen route which is basically a narrow superhighway with noisy and low flying aircraft. The reason for the shift of the flight path is to address concerns from McLean.

the new flight path was approved on Dec 10, 2015 by the Community Working Group at National Airport. Montgomery County was invited to participate in the Working Group only after the flight path had been approved.

The "no significant impact " determination by the FAA is meaningless. The FAA has been introducing nextgen around the county claiming that there is no significant impact. Just google nextgen noise and you will see what nightmare this creates for residents. We will live the same nightmare here in Montgomery County.

The meeting is a joke. Residents will have no opportunity to question the FAA publicly about the botched roll out of NextGen. How can you hold the FAA accountable considering the formal of the meeting.

The pre-nextgen flight path used to be a straight line. Airplanes traveled higher, slower and less frequently. Regional, small airplanes are now being replaced with bigger jets which increases the noise significantly.

This is NextGen for you:

For anyone interested in the meeting, the Reagan National website says 5:30 p.m. to 8:30 p.m. Slightly different time than what is mentioned above.