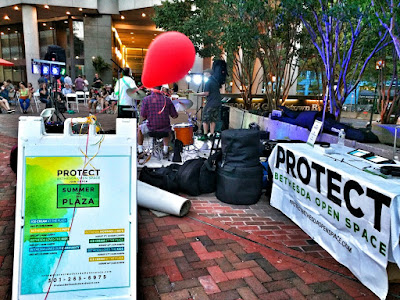 Dueling concerts. Coffee and donuts. Artworks being created live as commuters pass by. The fight to win hearts and minds over the future of the plaza at Bethesda Metro Center could spawn an arts and entertainment district all by itself.

Brookfield owns the rights to develop the plaza, and has plans for a building of up to 290' tall that would frame and separate from noisy traffic a new central park. Their development plans also include restaurants and retail to activate the space. They've created a campaign called Bethesda Connected to promote the project.

Not so fast, says Clark Enterprises, whose headquarters currently has prime visibility on the plaza. Clark has launched a campaign, Protect Bethesda Open Space, that has appealed to concerns by residents that there is a lack of parkland and open space in downtown Bethesda.

It's hard to argue that Brookfield can't execute its plan - they have the legal grounds and right to do so. Clark's primary hope, then, is to generate enough support for its proposal, and sufficient opposition to the Brookfield plan. Central to their appeal may be their standing as one of the highest-profile hometown firms.

I've reported on this a number of times, but the campaigns are heating up again. Several mailings to downtown residents in July have been followed up by events and happenings at the plaza.
Last night, Clark hosted a live concert on the plaza that promoted Protect Bethesda Open Space. As the musicians played, an artist sponsored by Brookfield was carefully coloring in his new mural that wraps around the top of the bus bays. The immediate winner was the Bethesda pedestrian, who could enjoy the free concert, watch an artist in action - or both simultaneously.
Brookfield has its own concert series called Fridays on the Plaza, from 6:30-9:00 PM, and earlier this month gave away free coffee and donuts to Surge-weary Metro riders. The mural is an early preview of the international Arts Brookfield initiative that Brookfield promises to expand to its Bethesda property. It is also part of a major investment Brookfield is making in renovating the bus bays area, and making it more inviting.

You can be sure that the plaza, along with Pike & Rose and Carr Properties' development planned for the current Apex Building site, are going to be in the competition for the prize of the new Marriott headquarters. Could public opposition to the 290' building (an opposition currently unmeasured by scientific polling, by the way), trump Brookfield's ground lease rights and clear economic development appeal in currently-moribund Montgomery County?

Stay tuned. And pass the donuts.
Posted by Robert Dyer at 7:00 AM

The Metro Plaza used to be nicer- a food court and ice skating rink.

Now, it's a depressing entrance to our downtown for Metro riders.

I get Clark's opposition, but their marketing campaign is underhanded and shady. It's not their property, and they are deceiving the public in their very manipulative efforts. Here, have some ice cream and hot dogs while you listen to music and we tell you a park would be a great idea. Oh we forgot to mention that we don't own the rights to the land and we only now care about a park now that someone is trying to do something there that blocks our views.

This is sullying the recently departed Clark name.

I'd like it if they sold cheese near the metro

Unfortunately, none of the projects you mentioned can accommodate Marriott, and especially not a larger Marriott-Starwood. Of course they could split up their space requirement between different sites, but given the consolidation trend that's probably unlikely. They would need to be in multiple buildings located on the same property.

Yes I always thought this too! Why is Clark dragging his name through the mud with this deceptive campaign?

Clark is acting very under-handed. I received their mailings also.

The patriarch of Clark recently passed away and I doubt he'd be behind this. It's a shame others are acting this way.

Aren't they following his wishes? I thought that was part of the problem.

Anonymous said...
This comment has been removed by a blog administrator.
1:01 PM

Anonymous said...
This comment has been removed by a blog administrator.
1:08 PM

It's an extremely underhanded tactic by Clark.

The Communist is back! Keep deleting comments Dyer! Birdbrain

Anonymous said...
This comment has been removed by a blog administrator.
2:55 PM

Anonymous said...
This comment has been removed by a blog administrator.
5:50 PM

You forgot to delete a comment, Dyer you #Birdbrain!

@6:43: You're living proof that Bloggers will never be as legitimate as the newspaper men of old! Poser!

The old legacy print media sounds pretty defensive here.
Why does this anonymous nut have so much resentment towards Dyer's next generation digital news?

Dyer's audience is surging and he now has the top news sites serving Rockville and Silver Spring. Pretty impressive accomplishments by Dyer. Let's support him! These neighborhoods would be news deserts without Dyer's coverage.

Defenders of Dyer don't get that those bashing him don't really care about the "old legacy print media" and just really dislike Dyer's approach and opinion.

How would a random defender know that Dyer's audience is "surging" and he has "top" news sites anyway? Independent tracking is poor at best, and defenders talk about obsession - that's a pretty dedicated thing to look up.

Anonymous said...
This comment has been removed by a blog administrator.
4:49 AM

How would either of you know stats for either site? Both of you seem obsessed. ;)

5:01am third party analytics my friend.

Actually, I'm fairly disappointed in the other site. With their staff and independent writers, their ad revenue, and their web presence I expect a lot more than they deliver.
They've also followed the book on ways to increase web traffic; one of their latest being the "quiz."

@5:35 I think their piece earlier this week on Kramer and his conflict of interest with DLC was good investigative reporting. Maybe it stands out because they do it so rarely.

4:49: I'm ROFL in response to your fantastical description of the glossy mag. The only reason your neighborhood isn't a "news desert" is thanks to me, moron. My site is the one everybody is aping. Saying, "****, why didn't I think of that?!" isn't what most people would term an "accomplishment." BTW, their site sucks on mobile, while mine works on every mobile device.

5:40: There's somebody with financial/political interest in privatization (which I fully support BTW) feeding them all those stories about liquor/breweries/etc. Kramer moved against them, and this report was supposed to be payback. Just ask Bill Frick. I'd be glad to print these stories about the inside baseball of liquor, too, but until the embedded liquor guy or gal figures out you need to reach the masses and not worry about boosting a particular website, they're losing a lot of potential audience for their message.

If your writers are freelancers based outside the county and summer interns from Bumfuck U., don't expect great, in depth coverage.

The magazine is basically an unfiltered PR group for the Council. They aren't journalists, so stop expecting so much.

Dyer does the work.

Or one's interpretation of the truth. Facts.

Anonymous said...
This comment has been removed by a blog administrator.
9:19 AM

9:19: Your claim that The Other Site has no bias is a laugh riot. I've never read a single article that makes the Council look bad, and the only time the government is criticized is when it stands in the way of the agenda of their angel investors.

In contrast, I have no mystery investors and no financial incentive on the issues I report about. Any bias I have is in favor of the taxpaying residents of Montgomery County, unlike some in the media who fancy themselves as change agents in lock step with Council dragging said residents kicking and screaming into some dystopian future urban hellhole built atop existing SFH neighborhoods.

And yes, your delusional and defamatory comment will be deleted, and you do work for those folks. Baba Booey.

So how do you pay for your housing, food, booze, clothing, car, booze, gasoline, car insurance, booze, healthcare and phone/TV/Internet?

I don't know wha 9:19 said but definitely both you two have biases. For sure.

12:04 pm Do you know what a Patch reporter made? I do and it wasn't exactly lucrative work.

Dyer has a large, growing audience in one of the most affluent and educated communities in the country.
Stop attacking him and support him.

How do you know the audience is growing?

Oh absolutely you're right, Dyer and BB and any news organization all have biases.

Clark is being deceiving for sure. They could always buy the rights and build a park if that's what they believe is best for the people of Bethesda (coincidentally only caring when there's a legitimate possibility of someone finally building there).

5:09: Why would I support failed councilmembers whose constituents died on their watch as the result of their incompetence?

More importantly, what the hell does any of this have to do with the plaza at the Metro?!

4:26 why would I support failed councilmember candidates whose lack of constituents didn't want him in office in the first place as a result of X, Y, and Z?

I'll give this a shot.

Pretty much how most feel about Robert Dyer.

8:29 just described Reimer and Leventhal. One is extremely low energy with zero accomplishments so far, the other has a really bad temperament and treats staff badly. Both alienated large swaths of constituents.

Founding a leading source of local news is a pretty big accomplishment.
Dyer is well established and very involved in the community.