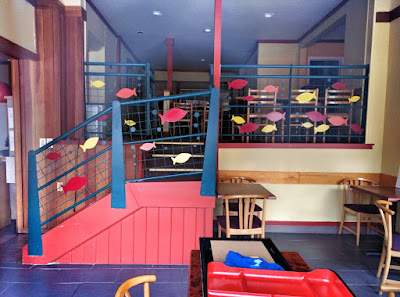 They really mean it this time. Matuba, a popular Japanese restaurant and sushi bar on Cordell Avenue, has permanently closed.

Owner Kunio "Yasu" Yasutake's restaurant became an institution in downtown Bethesda over 37 years of operation in the Woodmont Triangle. He first made history by offering what was, at the time, the only rotary sushi buffet in the Washington, D.C. area. The restaurant would wind up being one of the longest to continuously operate in Bethesda history.

The restaurant has been put on the market for sale twice in the last 18 months. At one point, Yasu "retired" for six months, only to make a triumphant return in September 2015. He says he is retiring now for good, but leaves his loyal customers with a final message: "Arigato!" 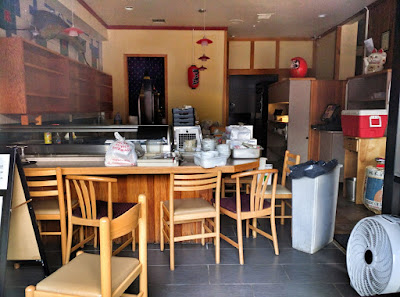 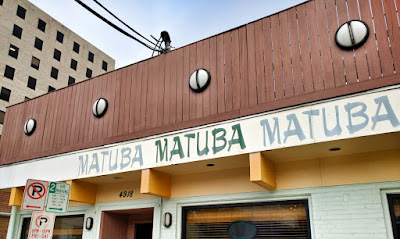 This property could be a nice redevelopment into a larger retail space for a bar/restaurant. The old house/split level takes some serious creativity to make work so I would imagine it will be hard to find a tenant. I hope someone jumps in on it soon (not Greenhill).

Dyer breaks the story again. Expect this to be reported on the other website a few hours from now.

Shame to see them go. Any Japanese restaurant recommendations? My Japanese friend recommends Hinata the next block over, but that's just for sushi take-out.. it's a Japanese grocery.

What's your obsession with Dyer?

4:58 was obviously being sarcastic. No one would honestly be this quick to praise someone like this.

That's quick! It sat on the market for a while last time.

Wouldn't that be awesome to bring back the Surf Shop! Sigh, those were the days... Now we have hover boards and Pokemon Go and kids riding and playing at the same time.

It's painful to read the long, winding setup to refer to another site..lol. They always want to insert themselves into Dyer's site.
Buy an ad on Dyer's site if you want to promote your self published blog here :)

4:58: Raku, Sushi-ko in Chevy Chase, Passion Fish, to name a few. You can't get more Japanese than Hinata, though...

Really reallt hope Greenhill didn't buy it. Unless he actually plans to follow through and assemble something this time around.

7:29 AM Try the East Dumpling House ad Dyer has been running for the past three years on his Rockville Nights site. That's how!

I love me some East Dumpling House!

I'm 4:58 and I'm not Dyer. He just deserves credit when it's due. The other website published something about this a few hours later, and with no credit to Dyer.

I'll call out Dyer when I think it's necessary -- like his refusal to allow comments on any articles relating to a Greenhill property.

Anonymous said...
This comment has been removed by a blog administrator.
3:05 PM

3:05: You just appeared as the new photo next to a word in the dictionary that can't be printed in a family publication. What's really embarrassing, is that on a day in which I had 3 huge scoops, you're on here crowing about a little story that was actually broken in my comments section yesterday.

Scott, I noticed their "restaurant for sale" listing had been taken down, suggesting it had been sold to a new owner.

But here's the weird part - earlier today, I recall Caddies tweeting explicitly that they would be open tonight. Their Facebook said the same thing.

Anonymous said...
This comment has been removed by a blog administrator.
5:01 PM

Anonymous said...
This comment has been removed by a blog administrator.
5:33 PM

Anonymous said...
This comment has been removed by a blog administrator.
5:37 PM

9:59, if multiple news outlets report on the same thing, is it definitively always sourced from the first news outlet?

Oh so he does generate ad revenue? That's good to hear. Glad he's making some money somehow. I felt bad he does all this great reporting and didn't have any income to show for it. A man's gotta eat and pay rent!

8:25: It's over. Nobody cares. Pick up Hans Riemer's dry cleaning before he fires you.

Satsuma has excellent Japanese food. Tako Grill is good, too.

I thought you explicitly states that comments had to be on topic / relevant or would be a violation of comment policy is why you deleted a bunch of nasty posts?

What does 8:25's comment have to do with Hans Riemer and how come you are being nasty about it?

"He started it" is probably his response.

Anonymous said...
This comment has been removed by a blog administrator.
9:01 AM

Anonymous said...
This comment has been removed by a blog administrator.
9:08 AM

9:01: The scoop was in my comments section a couple of days ago. From there it was an inside job. Not a scoop.

9:08: "Anger and victimization at the loss of absolute power to control your message." - Jon Stewart

"From there it was an inside job"

LOL, what a pile of horse shit.

You're totally right. You shouldn't be angry at the council or planning department.

10:14AM Maybe, maybe not. Sure makes it more interesting.

10:24 yes, journalists should bow and obey the Council and Planners. No skepticism allowed.
And you wonder why the local legacy media is going extinct.

If Jon Stewart had ever heard of Robert Dyer, he'd say he was even crazier than Donald Trump.

Totally. The opposite of anger and victimization at the loss of absolute power to control your message is bow and obey. No skepticism allowed.

Says the idiot who bows and obeys Robert Dyer.

11:57AM - OMG, is that the dumbest thing today?
Do you actually think that only those who "bow and obey" Robert Dyer are ticked off at our county council?
I don't have the time nor the crayons to explain this to you.

You wonder why the County is not progressing. This legacy local media that coddles the Council and Executive isn't helping.

2:19: Absolutely. The fact that trolling this website was added to your paid duties is proof I'm progressing.

5:26's connection from what 2:19 is tenuous about best. Even if there was a shred of evidence. Which there isn't.

7;04: There's plenty of evidence. Did Nixon ever give Woodward and Bernstein an "attaboy"?

8:56: The old Saul Alinsky "label your opponent 'insane'" tactic. It's like when you're in a college course and the professor is reading his lecture off yellowed papers because it's the same one he gave in 1967.

You people are like little kids.
Can I have the candy? "No"
What if I promise to wait until after dinner to eat it?
What if I get yogurt covered raisins, they aren't candy so i can have them now, right?
What if I give you half, mom?
What if I get the strawberry-flavored? It's like fruit, right? Can I have it then?

Trying to get the response you seek by coming up with silly little changes.
SMH

This is true. Also Robert Dyer is a troll too.

Can you explain this so called "plenty of evidence"? Would appreciate hearing this.

That kind of stuff, i.e. evidence, is often withheld during an ongoing investigation.