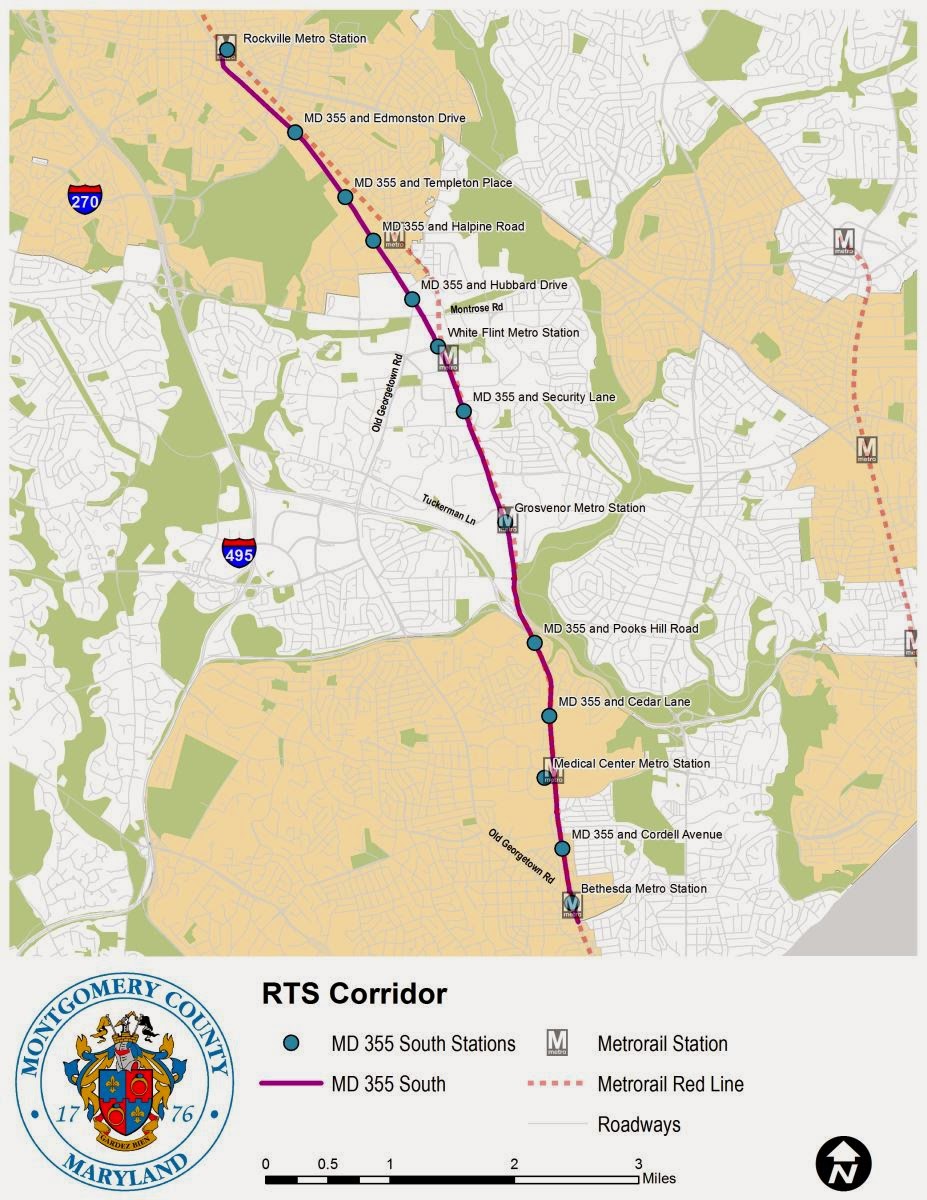 The delay in the 8008 Wisconsin Avenue apartment building project, that was ascribed to the future possibility of a bus rapid transit line running down that street, turns out to be related to a BRT station planned nearby. A Montgomery County map (above) shows one of the MD 355 South BRT route stations will be around the intersection of Wisconsin and Cordell Avenue.

Douglas Development's accommodations to BRT right-of-way issues are contained in a letter from their attorney, Emily Vaias of Linowes and Blocher, LLP, to Montgomery County Planning Director Gwen Wright. In it, Douglas proposes to dedicate 13.5' of its property frontage on Wisconsin Avenue to allow the creation of the 122' right-of-way demanded by the BRT plan between Chestnut Street and Bethesda Avenue. 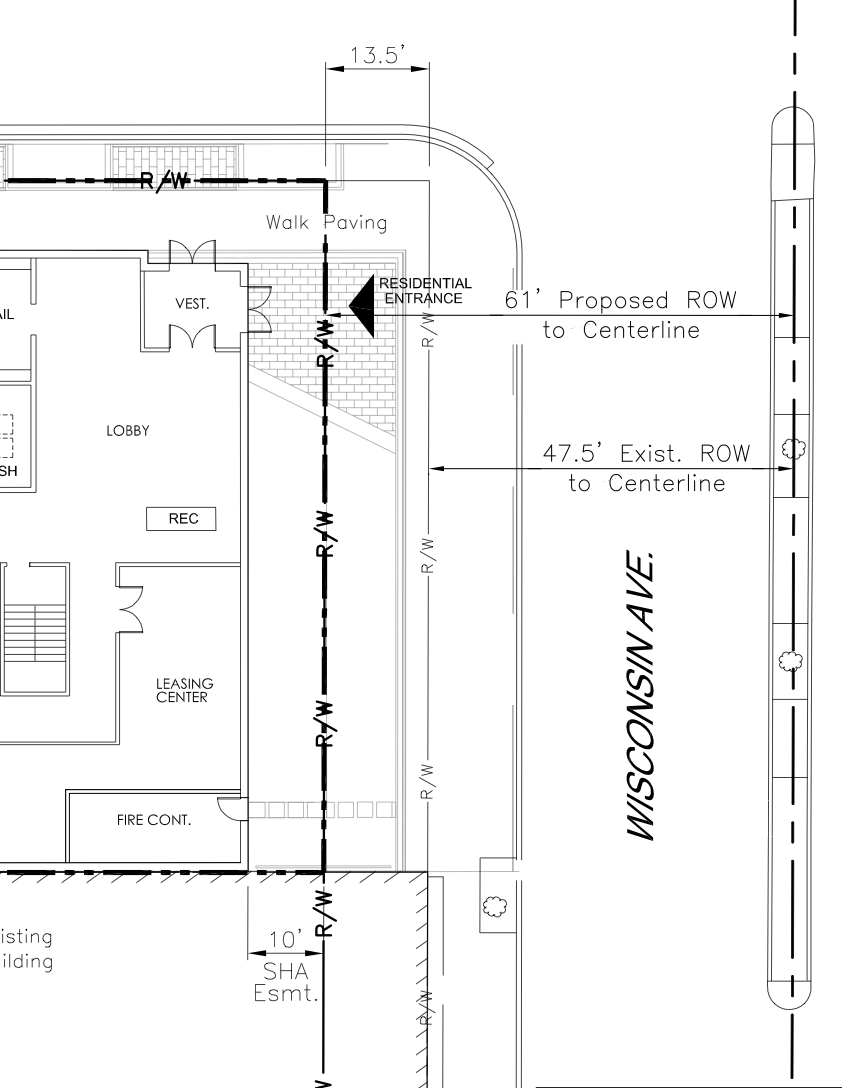 Douglas will also cede another 10' easement to the Maryland State Highway Administration on the Wisconsin side, to facilitate the Cordell Avenue BRT station, should it be built in the future. In exchange, the SHA would allow Douglas to extend its parking garage east underneath that SHA easement, and extend air rights over part of the easement at a 15' clearance. In other words, the underground garage would not have to shrink, and the building could bump out beyond its ground level footprint, accommodating pedestrians and BRT facilities underneath that overhang.

Also in exchange for these concessions, Douglas is asking to be exempted from a proposed truncation of its property at the corner of Cordell and Wisconsin, which Vaias says would prevent construction of the project's "vibrant" lobby and entrance that would "help to illuminate and activate the streetscape." She also notes that the easements being provided by Douglas would provide ample sight lines at the intersection, and that the full truncation would be inconsistent with the urban character of the location. 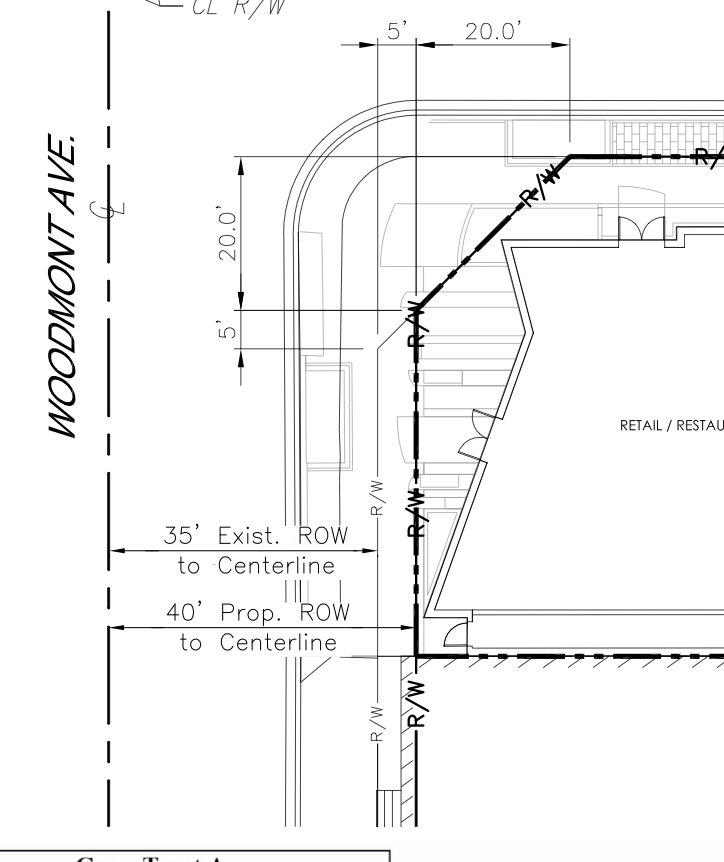 Another tradeoff on the Woodmont Avenue side of the property would give the county a 20' easement to accommodate a future bike path and other streetscape improvements, while giving Douglas a 5' reduction in the currently required truncation of the property at the intersection of Woodmont and Cordell. Vaias writes that this exemption can be justified by the applicant's generous donation of easements for the BRT considerations on the Wisconsin side.

Finally, the proposed agreement would also let Douglas out of additional development restrictions the previous property owner had agreed to with the Planning Board in the past.

Vaias is requesting that the Planning Board review the proposed plan, as well as the already-submitted Project Plan itself, at its June 18 meeting.

While it's commendable that Douglas is accommodating the County's plans, one has to wonder how the County believes a R.O.W. of this width between Chestnut and Bethesda Avenue is possible. It's true that many buildings along that stretch of Wisconsin are going to be torn down and redeveloped in the next decade. But what about those that aren't, and which jut out into the width of R.O.W. that will exist in front of 8008 (and potentially other properties, assuming those landowners come to similar terms with MoCo and the state - which isn't guaranteed)?

8200 Wisconsin, the Doubletree Hotel, Fairmont Plaza, Akridge's 7550 Wisconsin office building, Bethesda Place, the Apex Building, and several other properties aren't going anywhere for many decades. On the east side, Chevy Chase Cars, Bethesda Crescent, and the Air Rights Building aren't either. And the historic Bethesda Theatre cannot be moved, no matter what - it's on the National Register of Historic Places.
I get that a spot like 8008 Wisconsin might be adjusted to accommodate a station through redevelopment. But as far as a huge BRT R.O.W. all the way down to Bethesda Avenue, that's not likely to happen. And certainly not with 6 traffic lanes - all of which are needed, considering they're already jammed during rush hour now.

Perhaps I've simply miscalculated, and there's some New Math solution to the problem after all. That still won't make the $5 billion BRT boondoggle, and the $300-$1000+-per-year BRT tax (at the 10% property tax rate hike suggested by County Executive Ike Leggett's Rapid Transit Task Force) Bethesda condo and home owners would pay to fund BRT each year, any more appealing to most residents.

8008 Wisconsin is a 14-story mixed-use project combining several properties, including the venerable surplus store and "beer house" along Wisconsin, Cordell and Woodmont Avenues. It will feature up to 140 apartments, including 15% affordable units (more than the required 12.5%), up to 4500 SF of non-residential uses (most of which will go to a restaurant space at the corner of Cordell and Woodmont), an underground garage, and public space.

The restaurant, with outdoor dining, should - along with the redevelopment of the parking lot next to Bruce Variety, and of JBG's land adjacent to Fairmont Plaza - help activate a currently dead block of Woodmont Avenue. Douglas is promising its lobby entrance and a zen garden will do the same on the Wisconsin side. The project sounds promising, so let's hope the Planning Board can get this moving forward.

Ridiculous to think that ROW all the way down Wisconsin will happen.

Just as idiotic to think their lobby will of anything to activate Wisconsin and Cordell. That little amount of retail is a joke. Sad....

If they can get a good restaurant on the Woodmont/Cordell corner, that'd be great. We don't want evening/weekend deadzones there, like a bank.

Oh yeah that would be great for that Cordell/woodmont side for sure!

Whatever happened to building highways? More roads, lanes, and parking lots will be the only things that really reduce congestion.

6:17am trolling Dyer?
you lost me at parking lots relieving congestion.

@ 6:17 AM - We need to build a 10-lane freeway through the middle of Bethesda so that we will not need this 10-foot easement for the busway.

@7:19 and use eminent domain to build all the pie in the sky freeway proposals or extensions we are always hearing about.

Robert, do you know who bought the parking lot and properties just south of this?Please, please, please try to assemble!

Too bad we couldn't get the entire long block under one developer. Would have really gone a long way to liven up Woodmont Triangle.

Someone convince JBG, Douglas, and this company to all merge into one mega development. Didn't JBG say they were seeking a partner anyway?

Dyer is confused. The busway proposal for Wisconsin Avenue only calls for increasing the right-of-way along its entire length through downtown Bethesda by 2-3 feet, not by 27 feet. The latter only applies to the locations of the actual locations of the stations of the busway, which are at Cordell, the Bethesda Metro station and Bradley.