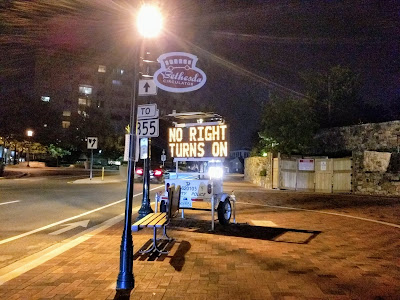 The illegal Leland Street closure at Woodmont Avenue has been reversed after it was exposed over a month ago. But with the parties involved having been caught red-handed, apparently there are both bitter feelings, and a need for those Montgomery County officials to still deliver something, anything for their patron(s) on Leland Street.

Thus the taxpayer-funded duplication of the existing turn restrictions sign at the corner of Woodmont and Leland that has just appeared. This is apparently supposed to serve as a digital reprimand to drivers who had complained, and also an attempt to show that "something is being done special for Leland Street." Ultimately, it is simply grandstanding. Full of light and fury. Signifying nothing. 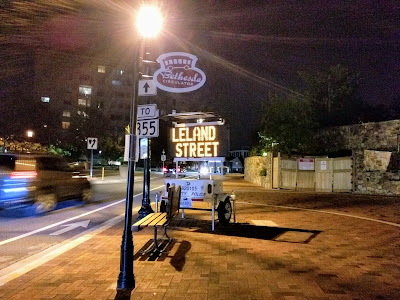 The uproar over the closure led anti-car County Councilmembers Hans Riemer and Roger Berliner, who are on the record supporting and voting for such closures in the past, to quickly try to distance themselves from this one with the 2018 election season underway. 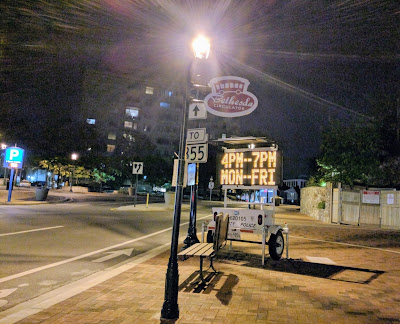 "Thus the taxpayer-funded duplication of the existing turn restrictions sign at the corner of Woodmont and Leland that has just appeared."

Did you contact anyone to find out the amount of taxpayer funds used?

"This is apparently supposed to serve as a digital reprimand to drivers who had complained."

"...after [the closure] was exposed over a month ago."

Ha ha...you didn't "expose" that. It was plainly visible to everyone who used those streets. Stop trying to take credit for stuff you didn't do.

Looks like the Puple Line has broken ground at last! A great day for Bethesda and EastMoCo!

8:03: The closure, yes, but the fact that it was done illegally without the required public process is what I exposed. Nobody driving past could know that without having read my report.

I don't think the Council needs to worry about the three votes from Bhatt, Fitzgerald and Vollmer. LOL

I plan to file a complaint with the county's office of inspector general on the Leland Street closure. It all seems too suspicious that they did the traffic reports last October to "support" closing the turning option, then suddenly in July they actually implement it, but only half-baked (some bollards, not a curb). Seems to me like someone wasn't following procedure at best, and took a bribe at worst.

What is your recommended solution?

Honestly thinking there was a bribe has got to be a joke.

My solution is to have a public process. You can't close a street in Downtown Bethesda with insufficient resident input and notice.

It's telling that the County didn't roll out this digital sign to inform drivers about closing the street. It was done very, very quickly and quietly.

Then Dyer reported on it. The rest is history.

9:18: I wouldn't rule it out - and such a bribe, unless executed by complete morons, will not be found spelled out in emails, I'm quite sure. It would be under the table.

One more - and hardly the highest priority - reason we need #BurtMacklinFBI on the case.

Did you ever contact Mr. Macklin to report your concerns, Robert?

Who the hell cares about this? Hey Bobby, why didn't you report on today's Purple Line signing ceremony? I guess you were locked inside Mommy's basement and you couldn't get out.

The Purple Line is widely supported except for a handful of wealthy anti-growth opponents in Chevy Chase.

Hogan has one of the highest approval ratings of any governor in the country, even after criticizing your hero Trump (who also happens to support the Purple Line btw).

I bribed Montgomery County and all I got was this digital sign.

@9:35 That does suggest something underhanded. When they closed Woodmont Ave at Bethesda Ave for an extended period of time (to build the garage, etc), they had digital signs up months in advance warning of it.

But close off Leland Street? No advanced warning at all.

And why as the closing so haphazard? Plastic bollards installed, with plans to install a real curb to block it _next Spring_? That seems hasty to me.

The traffic survey that they claim justified the closure was done in October. So they head nearly a near to plan for a proper closure, like pave a curb, put up warning signs, etc. Why didnt' they?

Now I'm not going to be like Dyer and blame Riemer for this, but it all seems awfully fishy to me. Can anyone point to any other permanent closures done in an equally suspicious manner? I can't think of any. Little Falls Parkway comes sort of close, but they did have a death to justify it (even though the person who died didn't obey traffic signals..).

How did you expose that it was illegal? You did report that there was no notice, but you didn't cite whatever law or regulation requires notice.

@2:50PM: The director of transportation conceded in his letter to the police chief that the closure was illegal. The full letter was posted on the other Bethesda site. But here's the county regulation if you want to read it in full: https://www.montgomerycountymd.gov/DOT-Traffic/Resources/Files/PDF/exreg17_94am.pdf. As the director already admitted, he exceeded the limits of his authority. It's probably not criminal, but I hope the county takes into account his misuse of county funds when it's deciding on bonuses this year.

Also, not sure why they didn't just do it right the first time. If the plan was to install a curb in the spring, then just wait until spring.

For sure Dyer gets credit for identifying the closure and providing a forum where people could exchange ideas on how to challenge it. But he didn't actually expose the closure as illegal.

6:41/2:50: Wrong. My original expose was all about how they didn't hold the public meeting or have any public process at all. Stop lying.

11:45: Because I'm not a house organ for the MoCo cartel. You have other options if you want machine propaganda reports and press releases. People come here for the real news, such as exposing illegal Bethesda street closures and government corruption.

And yet, there are still meters and parked cars at the corner of Wisconsin & Bradley, backing up cars, creating the need for a cut through Leland. Fix the cause and alleviate the traffic on Leland.

The parking at Bradley was less of a problem before they installed the traffic light at Trader Joes. They probably should have considered whether retaining the parking spaces between that light and Trader Joes was a good idea.

It was bad long before the light at Stanford. Long before.

LOL. I'm not lying. Yes, you said there was no notice, but you didn't explain that notice is a legal requirement to begin with. Ergo, you did not expose that it was illegal. I'm going to guess you're not familiar with syllogisms?

5:35: So if you don't spell out in a bank robbery article that "bank robberies are illegal," you didn't report an illegal bank robbery?

I know it stings that I exposed the illegal action and forced the Council to backpedal, old sport.

30,000 "moribund montgomery county" is the same thing then?

The reason Leland is getting so much attention from the county is because someone with influence and clout lives on Leland. It is called the Sacks neighborhood for a reason. And there are several residents on Leland who do not clear their sidewalks after snow and never get fined for it.