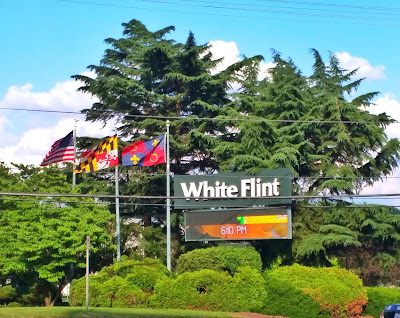 The Dark Side of White Flint, Part 43


Welcome to The Dark Side of White Flint, an ongoing series about the not-so-wonnerful, wonnerful, wonnerful side of urbanizing the suburbs of Montgomery County.
Some paranormal investigators believe that ghosts cannot communicate with the material world unless they have a medium of communication, such as an electronic device. Even Thomas Edison tried to create a ghost radio to speak to the dead. Recently, the ghost of White Flint Mall appeared to commandeer the mall's old digital sign, and send a garbled message to us all, and I captured it on film.

There's nothing on the site now but a field, after the mall that was fully-leased at the time its owners announced it would be demolished was finally razed. The "town center" project that the owners gambled on is now in development hell, and they must pay Lord & Taylor a whopping $31 million for breaking their contract with the upscale department store, which is the only portion of the mall still in operation.

What message was the mall trying to send us? Stay tuned.


"Our chimneys were blown down; and, as they say,
Lamentings heard i' the air; strange screams of death,
And prophesying with accents terrible
Of dire combustion and confused events."
Posted by Robert Dyer at 5:00 AM

That mall was depressing and moribund. Look at Lakeforest -- heck, look at Montgomery Westfield and its dozens of closures so far this year! You honestly think White Flint would still be booming? Town center developments are what's in demand now: Pike & Rose, Crown, King Farm, etc. Why is the author so anti-progress?

That was 30 seconds of my life that I'll never get back.

Seriously, what was the point of that? Are you running out of material, now that you can't figure out how to access the County crime and fire data?

"The mall was fully-leased at the time its owners announced it would be demolished."

No, it wasn't. Is there anything you will not lie about? White Flint had already lost one of its three anchors, Borders, seven months before the announcement, and was about to lose Bloomingdale's. It was clear when the Chevy Chase Bloomingdale's opened in 2007 that the White Flint store was moribund.

5:57: Lerner themselves proclaimed the mall was, I quote, "fully-leased" as recent as 2 years before demolition, which is when the demolition began with the Bloomingdales.

5:34: The County crime data has been illegally taken down. You can't "figure out how to access" files that have illegally been removed by the County.

5:22: I don't see much "progress" at the site of White Flint Mall. Just a wasteland earning zero revenue.

That reminds me - any news of this week's Justice Tuesday?

"...Of Dyer combustion and confused events."

6:02
"Lerner themselves proclaimed the mall was, I quote, "fully-leased" as recent as 2 years before demolition, which is when the demolition began with the Bloomingdales."

You should know better than that. Every single business owner is going to claim that business is going great right until they can't hide it any more. Look at all the "surprise" closures that you've reported on in Bethesda.

Even Westfield Mongtomery seems to be struggling with a ton of closures and that is considered Montgomery County's flagship, far and away better than White Flint was.

How is it illegal that the specific dataset is no longer accessible?

Can you cite the relevant code?

You could almost say that Lerner was way ahead in seeing the demise of shopping malls.
Except for the L&T debacle.

Robert Dyer is forced to go to Pennsylvania, to get crime news for Silver Spring. LOL

Any updates on Justice Tuesdays? Or the crime blackouts?

Just a lot of Dyerrhea here.

"The crime dataset is currently offline so we can align it with new crime reporting guidelines. We will post a tweet @datamontgomery when it is back online."

THIS is the information I received 10 days ago when I called and got to someone who could give me this answer.

I posted here that I had the answer and suggested Dyer make a phone call. No one ever asked me what I'd been told.

I keep reading that as "datamongery", which I guess could be a word.

"I keep reading that as "datamongery", which I guess could be a word."

Robert, is there a reason why one lane in front of White Flint isn't blocked off? It is, after all a construction site.

Spike in crime and the crime data suddenly isn't accessible.

8:15: I've received that same stonewalling excuse, but am probing further in my investigation. It will be worth the wait.

"New crime reporting guidelines." Where are those Nancy Floreen Golden Shovels when you need one?