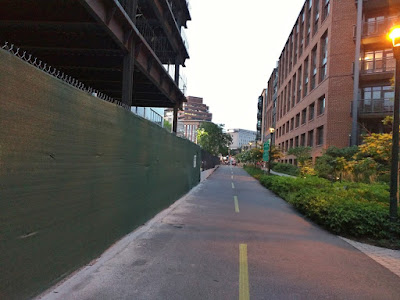 Montgomery County continues to ram through its plan to allow Ourisman Honda to squat on at least one public right-of-way next to its Bethesda Avenue dealership, in exchange for a "franchise agreement" with the County regarding the valuable land. The dealership will be allowed to keep its illegal new garage that extends into the Georgetown Branch Public Right-of-Way. In return, Ourisman will construct a 2236 SF public plaza, "decorative fencing," "decorative placemaking screening walls" on the new garage that faces the Capital Crescent Trail, reconfigure the trail where possible, add a 160' long pedestrian path, and commit to "ordinary maintenance and cleaning" of the CCT itself or via contract.

This 50-year agreement still does not resolve questions about ladder truck turning space for emergencies behind the Flats at Bethesda Avenue, how the secret future Purple Line extension will now fit between the Ourisman garage and the Flats, and the garage's overwhelming presence over the trail.

Why is the County lobbying so hard for the deal? First, the County ineptly approved the illegal expansion of the dealership, after it reviewed only Ourisman's blueprints rather than researching the complex rights-of-way in that former CSX rail corridor, and doesn't want to go to court over the matter. And perhaps equally important, Ourisman has been a substantial financial donor to current elected officials such as County Executive Ike Leggett and County Councilmember George Leventhal. The latter fact mysteriously is not mentioned in media coverage of the scandal. I am shocked. Shocked.

The public has one final opportunity to weigh in on the deal. Any objection to the agreement must now be filed in writing with County Executive Ike Leggett by the close of business on September 11, 2017, at Executive Office Building, Department of Transportation, 10th floor, 101 Monroe Street, Rockville, MD 20850, Attention: Chris Conklin.
Posted by Robert Dyer at 5:28 AM

Isn't Leggett retiring? What does he care then about the contributions?

How much were the contributions?

I'd like to see this decision challenged in court. What a shame that our ever-shrinking green space in Bethesda was given away by the County Council and the DPS.

5:42: Leggett didn't retire; he is being forced out by the voters. This isn't necessarily the end of his political career, either. I could imagine him being on the gubernatorial ticket if the Chris "Suppress the Black Vote" Van Hollen Old-White-Guy wing of the party prevails over Jealous in the primary, for example.

"Leggett didn't retire; he is being forced out by the voters."

Wrong, Dyer. He indicated his intention to not run for a fourth term, long before the Term Limit initiative passed.

Are you sure you want to go there, Dyer?

Dyer, if this issue was in Fredericksburg there wouldn't even be a hearing to discuss alternatives.

"Dyer", crying over the Dyer-straights of Bethesda and the "crooked deal" brokered between the County and the dealership. What, you expected the entire building to come down, to make you happy? That was never going to happen in a million eclipses. An economically viable solution was reached that works for both parties. Now shut the fuck up and find something else to cry your vampire tears over.

6:34: Hillary Clinton went there, when she bashed Van Hollen's campaign to suppress the black vote in Maryland in 2016. Leggett also announced he wouldn't run for a third term...and then did. He would have run again this time if he could have.

6:49: It's not about making me happy, it's about following the law.

Don't worry, Dyer. This building is coming down in a decade when they extend the Purple Line to Westbard and Dulles.

"An economically viable solution was reached that works for both parties"
The End.

No news in Rockville today?

How come only EastMoCo gets crime reports anymore?

Three entire days without unsubstantiated conspiracy theories, then this... *sigh*

I'm sure everyone is critical of the county for the gaffe in the first place, but in light of the current situation, this agreement is the best way forward. There is no "secret Purple Line" extension by the way.

Leggett is 73 years old and has served three terms, it has long been his intention to retire, and he announced such before the "term limit" vote, which by the way will have very little effect on the political composition of the council.

I find it funny how the "Friends of the Capital Crescent Trail", which is really a bunch of homeowners whose houses back up to the CCT where the Purple Line will go (and have filed the lawsuit holding it up) were silent on this.

Why were they silent? Because they aren't "friends" of the CCT at all. They are just NIMBYs who don't want the purple line train in their backyard! (On a railbed that was there long before they moved in .. no surprise to them).

If an extension to Virginia is a possibility, the Northern Purple Line alignment to Grosvenor/Rock Spring should have been selected. Poor long term planning.

How much were these substantial donations? Is there a way to look it up?

If only those poor souls that Berliner wants to build garage on top of could donate cash money.

Robert's blog is great for local news but I wouldn't vote for him for government office.

I agree. Great hyperlocal blog with amazing news scoops. Terribly opinionated and biased in my opinion.

More non-sequiturs from Sheepshill @ 8:56 PM. And same fixation on Westbard as the Center of the Universe.

6:44: I find it humorous that someone who conforms to all commands and norms espoused by the corrupt local government actually calls other people "sheepshills." Hysterical.

5:56: No more opinionated than Greater greater Washington or Bethesda Magazine or The Sentinel.

4:56: You prefer your elected officials corrupt and carpetbaggers?

1 - just because I dislike you as a candidate does not mean I like the other candidates as well.

2 - which elected officials are corrupt and how?

Lol..true..the sentinel and Bethesda Magazine are very opinionated and both publishers that are very active politically. Their viewpoints are certainly expressed in their articles.

That's their right, so let's not pretend they're fair and balanced.

Robert, I mean ANdy van Slyke the bowling alley and its parking lot are already of there poor souls soooooooo its nothing new loser

Both, really. And the hypersensitivity is one of the reasons many including myself will never vote for him. Among many other reasons.

"No more opinionated than Greater greater Washington or Bethesda Magazine or The Sentinel."

You can't have it both ways. If you want a pro-business environment - which your endless railings against the absence of the nighttime economy suggest you do - then when a business screws up like this, you have to find a solution short of tearing down the building.