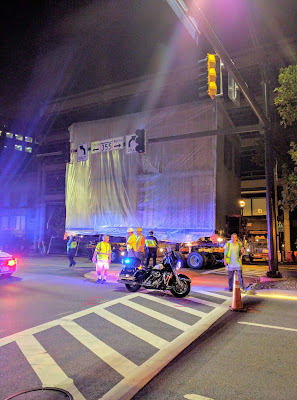 Crowds of spectators turned out to watch the move of the historic Community Paint and Hardware store overnight in downtown Bethesda. Some were filled with nostalgia, others were simply trying to figure out why there was a massive police operation up and down Wisconsin Avenue. The police numbers were matched by the number of hard-hatted utility workers, who were charged with making sure neither their infrastructure nor the venerable building were damaged by the move.

The store, originally known as the Wilson Store, was moved to clear the way for the redevelopment of the Apex Building at 7272 Wisconsin Avenue. It was previously moved a short distance south in the late 1980s, when that building itself was constructed.


Finally, it was time to move the building, one half following the other, creeping slowly up Wisconsin Avenue to Middleton Lane. There, a site was prepared for the building's new home, in a Montgomery County public parking lot. It is expected to be leased to a professional or retail business.

It would have been helpful if you had posted time-stamps, preferably in EDT, for each of the pictures. Those of us who were not able to watch last night, would like to know how long the journey took.

Terrific! Thanks for this.

All those pictures, but none between Elm Street and Middleton Lane?

2:57: You need a new monitor - there are tons of photos here between Elm and Middleton, and on Middleton.

What did you mean by the cops were yelling at people taking pictures because it is illegal?