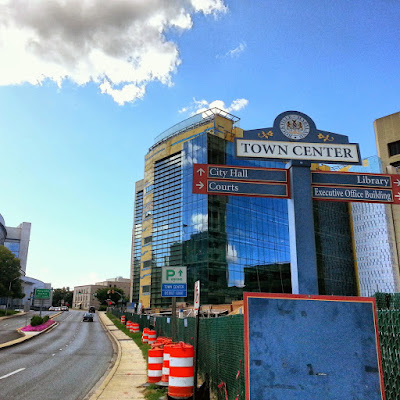 A Montgomery County Circuit Court judge found enough to consider in residents' lawsuit against the County over the Westbard sector plan, that he did not dismiss any of the three counts Wednesday. Judge Richard Jordan pushed back against attorneys for the County and developer Regency Centers, who asserted the suit's claims were "much ado about nothing."

Jordan felt otherwise. County attorney Clifford Royalty, who raised his voice and frequently shifted between exasperated and snarky in tone, claimed the fact that the County Council didn't sit as the District Council when holding February 2016 public hearings on the plan was merely a technicality.

"It might be a technicality," Jordan replied, "but it's the District Council that makes these decisions." The judge noted that he himself in the same docket may sit as the Orphans' Court in the Circuit Court. "It may be nomenclature," he said, "but it's also got substantive importance." Residents could only be aware the District Council was considering the plan if that fact was stated on all of the announcements, he said.

The defense team is counting strongly on what they termed their "ace in the hole," a safe harbor provision passed by the state legislature that conveniently shields sector plans from most challenges in court. They challenged the plaintiffs' taxpayer standing in the case, suggested that the only legal remedy was to have asked for judicial review of the Westbard plan's Sectional Map Amendment, and said the case should be dismissed because the Planning Board should have been a defendant from the beginning. Defense attorneys also claimed the amended complaint had changed too much over recent months. Of course the details would change, as new information revealed during discovery came to light, but the three claims have remained constant over the life span of the case.

For some context, Royalty has indirectly lost to plaintiffs' attorney Michele Rosenfeld in the past. Representing residents of Kensington Heights, Rosenfeld was successful in stopping a 16-pump gas station residents felt was too close to their homes around Wheaton Plaza. It was Royalty who issued an opinion as the County's top development lawyer which said a proposed bill to block the station was unconstitutional. Royalty also lost in Circuit Court when he represented the County in its bizarre high priority of banning fortune telling in 2010. He did tell the judge he was not on the County's team in the disastrous recent legal action over the Silver Spring Transit Center. "Lucky you," Jordan responded dryly.

Jordan seemed to find merit in Count 1's assertion that the Planning Board never conducted the required analysis of greenhouse gas emissions and reduction of vehicle miles traveled in either the plan itself, nor in the appendix. The defense made the most novel assertion of the day on that count, claiming that the phrase in the County law which says the Planning Board "must" assess those environmental impacts didn't mean it had to. "The word, 'must,' doesn't mean it's mandatory," said Regency Centers attorney Gerald Heller, as many in the courtroom shook their heads in disbelief.

"So what's the purpose of the law?" Jordan asked. "What would an apartment dweller's remedy be, if emissions were not assessed?" The judge said the word "assess" is "considerably stronger than 'consider.' What does 'assessment' mean, if it doesn't mean to measure?" "Fair point, your honor," Royalty replied. "Your point is valid [but] I fall back on my ace in the hole. Case law hasn't allowed for a sector plan challenge, so I don't know what the remedy is."

Counts 1 and 2 are very straightforward, but Count 3, alleging illegal contract zoning, will likely be the most complicated to sort out.

The judge did seem to agree at one point that the Planning Board should be added as a defendant. Defense attorneys asserted the same, but said it would be too prejudicial to their clients to add the board at this point, and that Jordan should dismiss the suit on those grounds alone. But he did not.

Jordan did not tip his hand either way as to how he might rule. He said the issues brought up over the 150 minute session in front of a packed gallery of residents were too complex to make that ruling yesterday, however - clearly indicating he felt the claims were valid enough to at least require detailed study. That was encouraging short-term news for the plaintiffs.

Jordan's decision will be announced in the coming weeks. If Jordan rules a trial is warranted on any of the three claims, the tentative date would be October 2. Rosenfeld yesterday withdrew a request for a jury trial.
Posted by Robert Dyer at 9:59 AM

I hope Westbard gets buildings as nice as the one shown in your photo, Robert.

"the County in its bizarre high priority of banning fortune telling in 2010."

Who said it was "high-priority"? Anyone besides you, Dyer?

Also, you imply that the current Councilmembers were somehow involved with that. The first sentence of your linked article says otherwise:

Anyway, nice that you support this hokum. Did you find a fortuneteller that told you that dead Mexicans will cost you the election in 2018, too?

Hopefully this learned Judge will strike down this terrible plan which was passed unanimously by the council without due deliberation!

Environmental concerns shouldn't stop the corporate raiding of neighborhoods. Perhaps Regency will incorporate an Air Cafe into the plans. People could ride their bikes to get a latte and suck on some oxygen while enjoying the park and streams. Oh, I forgot they're not doing that anymore. Maybe they could enjoy the view from the green roofs of the buildings. That's been cancelled too? Never mind. As I said, I'm sure that Regency is all about the environment.

what a waste of our judicial system and taxpayer dollars....bunch of litigious NIMBYs

No neighborhood is being "raided". No existing single-family home is being touched.

@4:07 The "waste of money" charge has been dispatched multiple times on this blog.

If the residents have suffered a wrong, to whom should they turn? Why does the judicial system exist? Further, had the county attorney notified the Council that they failed to follow their own laws in the first instance (you know, did his job, that we, the taxpayers pay him to do) maybe this suit would not exist. Of course, had Roger Berliner learned to listen to his constituents, that might also have solved all the problems with the Westbard Sector Plan.

1. Plaintiffs' attorney Michele Rosenfeld explained during the hearing why the Planning Department and Planning Board were not named as defendants in the Westbard lawsuit: the courts have held that these are advisory bodies only, and that Montgomery County, through the County Council, was the decision-making entity for the Westbard Sector Plan. Rosenfeld was the Planning Board's lead attorney for many years, and knows this area of the law cold. She is a seasoned, disciplined and accomplished litigator, as is the developer's counsel Gerald Heller.

3. Three of the 4 at large Councilmembers were even worse than Councilmember Berliner. Nancy Floreen openly favored development interests, including the developer of Westbard. George Leventhal sanctimoniously lectured Westbard area residents that they were lucky in where they lived, and should not object to the scale of the project. Hans Riemer insisted that the delivery of affordable housing was the key "community amenity" associated with Westbard. The delivery of affordable housing is a very worthwhile goal, but the underlying project also should be a good fit for the neighborhood. 2.3 million square feet of development in an area with almost no mass transit is not a good fit, so Riemer's stance is at best tone deaf. The fourth at large Councilmember, Mark Elrich, was more sympathetic to residents' concerns, but ultimately voted to approve the Westbard sector plan.

4. I applaud the Westbard residents and others who have backed the lawsuit. The County didn't listen to the majority of those who live in and surrounding the Westbard area; the sector plan was passed over their objections. The County deserves to be sued.

10:18: Is that why palm readers and fortune tellers were operating still during that "half-century" in Montgomery County? #FakeNews

Michele Rosenfeld ably represented the resident plaintiffs; and now, we await the judge's decision. When all is said and done, the Council cannot avoid the fact that MoCo residents spoke loudly and clearly with the term limits initiative -- Councilmembers (and those who are currently running for County Council positions) are forewarned that ignoring residents is not a winning strategy going forward. Roger Berliner apparently thought that the CCCFH group represented community sentiment; his mistake. There was a wholesale resident revolt against the CCCFH "resolution" to support the Berliner Fake Compromise; and Roger Berliner was too out-of-touch with real constituents to recognize his mistake, and to correct it accordingly.

Back to the Aug. 16 hearing ... The county attorney repeatedly emphasized that Councilmembers need not be present at "public hearings." Word of the day ... cavalier.

4:17: A neighborhood-sized shopping center is being put on steroids. That is a raid. Certainly the shopping center should expanded and rebuilt. But the proposed scale is too much.

Saaaaay... weren't there 13 comments here just a minute ago?

LOL!!! Robert deletes comments. Poor baby is so sensitive. Imagine if he commented on Berliner's blog and was deleted.... he would have a fit. Oh well Robert is special so it's OK. Rude Robert and his nasty comments and blog posts cannot be pointed out. He will delete your comments. He's lucky people comment at all LOL.

The comments started disappearing the moment "Woodmont" showed up on the not-a-new-steakhouse thread and "Elm" appeared on the Leland Street/Birth Certificate thread just a few minutes apart.

Morning break time and Bobert pops in for a few deletes.
How's that new job going?

Your should aim for photos that deal with the subject matter.

8:49: You should aim for getting a new monitor - that's the Circuit Court where the hearing took place yesterday, Einstein.

Just looked at the plaintiffs' complaint, apropos this blog.

The plaintiffs have unequivocally established taxpayer standing, identifying at least $42 million of public expenditures that will be require in connection with completing the Westbard sector plan. Paying for these expenditures falls on Montgomery County taxpayers.

I have no clue if the plaintiffs can prevail on the contract zoning count, but lawyers whom I respect tell me that courts are often reluctant to dismiss counts requiring findings of fact, so as not to prejudice plaintiffs' rights in court.

I think that the plaintiffs have a reasonably good chance of winning on the greenhouse gas count. County law requires sector plans to "assess greenhouse gas emissions, including a carbon footprint analysis." That is a clear cut requirement and the County didn't meet it in the case of Westbard. The plaintiffs' case is strengthened because the Countty has regularly conducted carbon footprint studies for numerous other sector plans (White Flint, Bethesda, Aspen Hill and others.)

@3:25 PM: Is the complaint available online?

The complaint may be found at SaveWestbard.org; on the home screen, click the link named "Legal Developments."