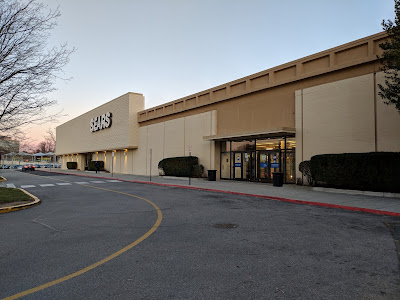 The expected closure of the Sears store at Westfield Montgomery Mall in Bethesda next spring has been moved up a month, according to a statement by the struggling department store chain. Westfield had previously announced the iconic retail anchor would close in March 2019. Now, Sears says, the store will close in February.

As I previously reported, Westfield has already acquired the Sears building. It plans to tear it down, and replace it with a mixed-use town center development.
Posted by Robert Dyer at 5:00 AM

Good to get the updated correct Sears closure date. Bethesda Magazine had a false report early this year claiming it was closing February 2018.

9:04 AM Bethesda Magazine never retracted the false story- they simply edited it to cover up the mistake. Rookie mistake by an intern I guess, but standard practice is to have a correction, not edit the original report.

Sears was irate when Bethesda Magazine published a story that they were about to close early this year. They demanded the story be retracted. Intern was likely fired over this.

Tastee Diner was selling out to Marriott contingent on Woodmont Grill selling as well- Dyer had reporting on that. Dyer's reporting was confirmed by Marriott spokespeople at a public meeting, so..yeah.

"Source: Tastee Diner agrees to sell, will be acquired for Marriott HQ site in Bethesda"

"A source tells me the owner of Tastee Diner has agreed to sell the venerable restaurant's property, to make way for a larger Marriott headquarters and hotel to be built on that block in downtown Bethesda. After several months of negotiations with the Marriott site property owner, Tastee Diner has reportedly agreed to sell for $7 million. That is $2 million more than the offer they received in February.

"Whether the diner would move to a new location, remains to be determined. If the deal goes through, Montgomery County officials should insist that a Hot Shoppes restaurant be included in the future hotel to balance out the nostalgia factor.

"The Marriott headquarters project is a partnership between the hotel giant, property owner Bernstein Companies and Boston Properties. It is expected to deliver in 2022. Tastee Diner is located at 7731 Woodmont Avenue, a corner of the same block as the Marriott site, which is addressed as 7750 Wisconsin Avenue."

I'll believe the Marriott spox, who confirmed Dyer's reporting at a public meeting, over an anonymous troll.

Who is this anonymous dude - commented most recently @ 11:49 - who appears to attend every single public meeting that Robert Dyer attends, hiding in the shadows and saying nothing, whilst stalking others who attend those same meetings?

Look for the helpers. You will always find people who are helping.

10:42: Why would it mention Woodmont Grill? The deal was between the Marriott partners and Tastee Diner. The deal fell through when Woodmont Grill declined to sell. This was confirmed by Marriott at their meeting months later, dumbass. You've been butthurt ever since I broke the details of the negotiations.

Dyer's troll has the same resentments as 6 years ago. Sigh...

“Any man can make mistakes, but only an idiot persists in his error.” Marcus Tullius Cicero, (106-43 BC)

11:58pm yep, same insults and resentments towards Dyer all this time. It's really sad.
All the same inside baseball blog stuff, "retard", "basements", evening photos, etc.

12:45 -- You're the only one in this thread talking about basements, evening photos, and the "r" word.

Robert Dyer said: 'No "ridiculous claims' have been made here. In fact, this website is the only one that was on top of the (potential) real estate deal of the century throughout the negotiations. Many others, including the Washington Post, were reduced to having to plagiarize, react, and follow up on my blow-by-blow reports on the inside baseball. That's what happens when you have real sources, not just a Marriott or Bernstein press release. There was an agreement, but it was irrelevant ultimately as Woodmont Grill declined to sell. That's why people turn to my site for the inside scoop."

Not-So-Anonymous said: "It is you who is [sic] obsessed with this inside baseball stuff about local bloggers. No one cares. I'm pointing out that the local legacy print folks screw up regularly. Dyer doesn't waste bandwidth to troll their blog."

"Barwood Sucks" said: "Back to the old 'my Wordpress blog is better than your Google blog' debate. Way too inside baseball for most readers."

Not-So-Anonymous said: "What you quoted isn't the 'about us' page in this site. Nice try.

"Now, what do we know about other local bloggers, interns from Bumfuck U. and Frederick freelancers? Nothing...not even a photo.

"This is all inside baseball stuff."

Robert Dyer said: "You are correct - there are several spots where there are potential for accidents when drivers are just being presented with this from out of the blue. The gotcha game has put a lot of people at risk for an inside baseball PR move. Excellent point.

6:50: You think "inside baseball" is not a common phrase? Your mental illness is real.

"Inside baseball" has been around for a long, long time. But it's usage is minimal.

Grammarist defines it as "inside baseball is a figurative adjective meaning appreciated by only a small group of insiders or aficionados."

But it's rarely used in this blog or comments, except as detailed by our phenomenal resident historian.

So it's not so much about how common the phrase is, it's about how often it's used here and by whom.


Curiouser and curiouser! They use the same phrases, usually have the same cadence.
There's a serial shiller in our midst. This sounds like quite the mystery.

Inside baseball, as in obsessing over things no ordinary reader cares about such as blog templates (Wordpress vs. Google)

Inside baseball, as in obsessing over things no ordinary reader cares about such as Hans Riemer.