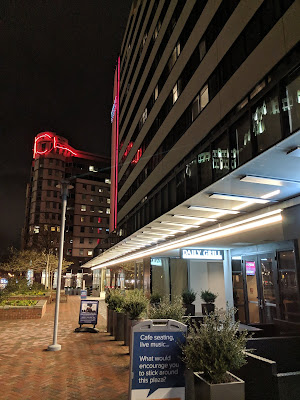 My scoop last month about Brown Bag returning to downtown Bethesda has now been confirmed publicly by the local restaurant and catering chain. As I reported, Brown Bag will be opening in the ground floor of the Hyatt Regency Bethesda hotel at 1 Bethesda Metro Center.

The original Brown Bag at 7272 Wisconsin Avenue in the Apex Building was forced to close on December 19, 2016 because the building was being demolished to make way for a Purple Line station, and a new Carr Properties mixed-use development. It was one of the first economic casualties of the Purple Line in Montgomery County. Brown Bag continued to serve Bethesda through catering services, but was greatly missed as a breakfast and lunch spot by downtown workers.

Brown Bag has now confirmed it is "coming back to its roots" in Bethesda, where the chain opened its first restaurant. The company says its new 1710 SF location at the Hyatt will open next spring.
Posted by Robert Dyer at 5:00 AM

From the Best of Tarnation Bob:

"The Purple Line is near death."

6:04: All these major scoops I've published on the holiday weekend alone, and you're jabbering to yourself in a dark room. Sad.

Jabbering in a dark room, Sad? No! Alone on a holiday weekend spewing regurgitated jibberish. Pathetic!

Great to see an old favorite return to downtown Bethesda. Many years at the Apex Building!

Now, can we get a Unos somewhere ;)

I originally posted this is in the wrong blog post. Good news they are coming back!

I'm a big fan of Robert's hyperlocal blog, i love Bethesda and how it is growing and changing. But anyone else notice that when info turns out correct it's "my scoop was right" and when it's not correct it's "the source was wrong".

We're all Dyer fans. Let's be good to each other.