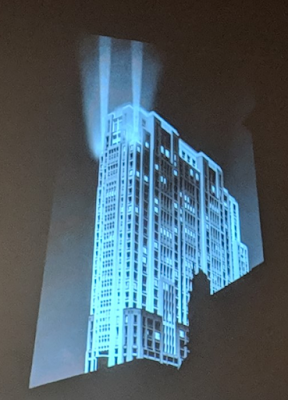 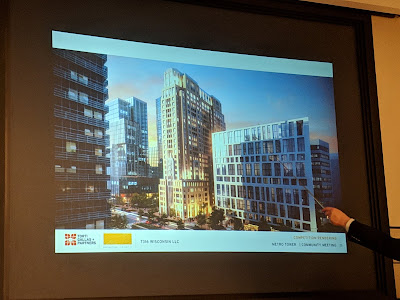 "It's a building of elegant proportions," Torti said, which will also be sensitive to the pedestrian experience at its base. The 250' tower will be set back 25' from the curb of Wisconsin Avenue, and 15' from the curbs of Elm Street and Hampden Lane. Torti envisions style elements that reminded many of Rockefeller Center in New York, with two-story storefronts for its ground-level retail. The art deco design will also stand out from the more-modern architecture of The Wilson and The Elm, 290' towers that will be Metro Tower's next-door neighbors in the next decade. Torti also cited the Bethesda Naval Hospital tower as another great art deco structure in the area. 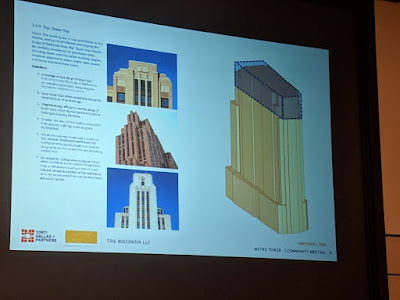 Expect 370-390 rental apartment units above the retail, with .5 parking spaces per unit, as the development will be within the downtown Bethesda parking district. B.F. Saul noted at the meeting that the firm holds onto its properties unlike some other developers, and is therefore fully invested in their success and longevity. 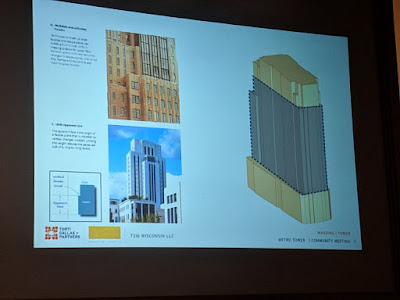 Saul will submit its sketch plan to Montgomery County by the end of this month. The designs showed a significant lighting feature atop the building, similar to the Chevy Chase Bank tower also developed by Saul, a feature missing on many dull and dark rooflines among the post-Great Recession buildings in Montgomery County. 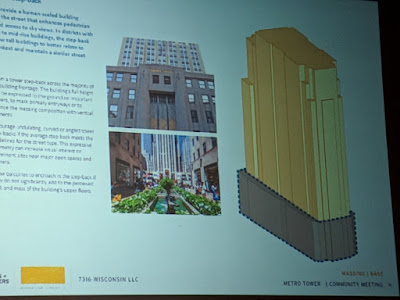 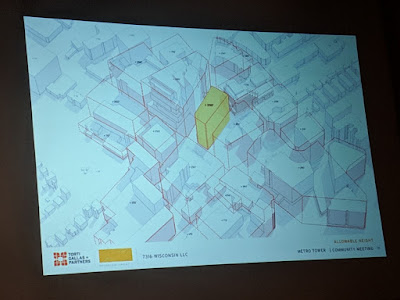 This is a great looking project, but it should not be lost that we're losing office space. That's not a reason to oppose this project, but we should think about why it is that developers are building much more residential than office.

6:38:
Agree that the architecture is impressive (for Bethesda). The office space is really outdated Class C space, and there is about a million square feet of trophy office space going up around this site between the Carr, JBG, and Stonebridge projects.

I was at the meeting and initially was very disappointed to see a very traditional building design. Sort of a retro-inspired revisit of an Art Deco past. I spoke up,and argued that as a modernist, I believe new buildings should reflect their own time, and not try to ape the past or pretend to be old.

After sleeping on this, I think the building might have some very good qualities that might help it become an iconic landmark in town.

The site is quite unique in that the building stands proud and has windows and exposure on all four sides, including a new expanded publicly accessible private open place (POP) that alone is a great idea and unique to many sites in Bethesda that are often adjacent to other buildings.

The site is very narrow so the tower will be very slender and dramatic on Wisconsin. The vertical emphasis of the facade design will reinforce the elegance, especially as it is close to many tall building with a more horizontal expression like the Hyatt and the new Wilson Office Tower. This will be a nice contrast, which is always good in cities. Lots of variety is always a nice idea, unlike homogeneous places like Reston Town Center that have a singular architectural style.

The dramatic lighting is a great idea that will help emphasize the set backs, and create a memorable building. It’s quite difficult to self illuminate a residential tower and not piss off the residents inside. They look like they are doing a nice job and hopefully, will inspire other developers to create dynamic nighttime skyline in Bethesda.

Going back to the traditionally inspired design, it will certainly be a nice contrast to the neighboring ultra modern buildings. It looks like it will be attractive to view from neighboring towers as well. A bit of a brick clad jewel amongst edgy glass, steel and concrete towers.

Lots of retail in the base, with a tall two story high proportions might attract some higher end tenants and a nice Fleming’s steakhouse on the plaza.

I really like that BF Saul buildings utilize high end finishes and retain their investments. Many developers use inexpensive materials that don’t hold up over time, and simply flip their buildings and move on.

I think their architect is highly skilled at this style architectural typology, and although not my cup-of-tea, will be a handsome and enduring addition to downtown. It will offer some unique apartments that are not really available in the area. Perhaps the Lionsgate condos would be the closest comparison. It will be fun to see this new tower take its place in the urban fabric of downtown.

Too bad the project does not include an urban cinema as many (and I) had hoped. I guest our last chance downtown will be the former gas station site to the north. With a much wider and deeper site, perhaps that developer can squeeze in an ArcLight or Alamo Draft Cinema style venue to supplement the Landmark Bethesda Row Cimema.

The only concern I have is with the over-illumination of the top portion of the building. BF Saul did this at their HQ building (Wisc. and E-W Highway) which at night you can see for miles. This is completely unnecessary (especially for a residential building) -frankly it's obnoxious and an eyesore for residents and it does not comply with DarkSky (www.darksky.org) guidelines.

I really like the illumination on the former Chevy Chase Bank buildings. It brightens up Bethesda's drab skyline.

I also do not like the illumination at the top. It is getting tougher and tougher to see any stars in the sky over Bethesda. I would like them to spend more effort on what pedestrians experience at ground level, and less on what the building looks like from a mile away.

Bethesda is already home to one of the finest examples of Streamline Moderne architecture - the Naval Hospital. It is fitting to add more Art Deco inspired buildings.