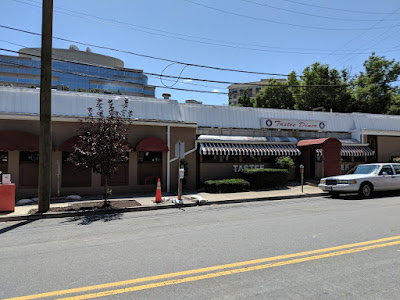 The development partners of the relocated Marriott International headquarters at 7750 Wisconsin Avenue say they have heard concerns about increasing truck traffic congestion on Norfolk and Woodmont Avenues around their construction site, and are pledging to improve the efficiency of truck circulation. A particular problem has been traffic backing up on Norfolk Avenue while attempting to turn left onto Wisconsin. The partners say they will work with transportation officials to change the timing of signals there to speed up traffic.
A second planned power outage around the site will occur later this month, potentially on or about November 16. The first Pepco planned outage to complete Marriott-related utility work late last month was a success, the partners report. They also renewed their reminder that any other outages occurring nearby are not related to Marriott, but are the result of several other utility projects underway in the area.
Posted by Robert Dyer at 5:00 AM

Have you actively turned away money from developers, or have you simply not been offered any?

Hi, I’m Robert Dyer a candidate for Montgomery County Council At-Large here with an urgent message about how to make your vote the most effective on this election day.

It’s no surprise that our criminal and corrupt Montgomery County Political Cartel is pulling out all the stops to keep honest candidates like me from getting on the County Council. They’re using their control of the local media and local organizations they’ve shut down debates in the election and they’ve given thousands of dollars to each of my Democratic opponents.

So how do we stop them? One of the most effective ways is the bullet vote and I’m going to show you how to do that right now.

You’re going to take your pen and fill in the circle by Robert Dyer. First name on your ballot, right here. And then, you’re going to leave all the rest blank. See these four Democrats – they each got thousands of dollars from the developers and the Montgomery County Cartel. You don’t want to vote for them. And what this does is by bullet- voting for Robert Dyer you give me a vote and it takes away a vote from each of those developer-funded politicians below me. So it’s like you’re voting for me three or four times even though you only voted right here. A bullet-vote for Robert Dyer is going to make a difference. Leave the rest blank under County Council At-Large and we can stop the Montgomery County Cartel from stealing yet another election.

CAPTION: “For a County run by the citizens, not the developers … ELECT Robert Dyer”

That's not how counting works.
You get your ONE vote.
The others DO NOT get a vote taken away from them.