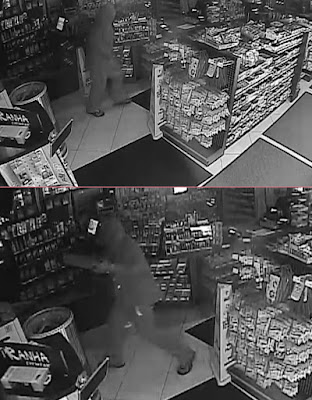 Montgomery County Police are asking the public's help in identifying a suspect they believe is responsible for 3 commercial burglaries in Potomac over the last 48 hours.

At 12:25 AM on September 4, the suspect allegedly forced his way into the convenience store at the Cabin John Shopping Center Sunoco station, and unsuccessfully attempted to jimmy open the ATM machine.

Exactly 27 hours later, on the morning of September 5, he allegedly returned to the scene of the crime, smashed his way in again, and then smashed the store's cash register on the floor. He took an undisclosed amount of cash, and fled.

Ten minutes later, the suspect forced his way into the Potomac Express Food and Deli at 12960 Travilah Road, tried and failed to jimmy open that store's ATM, and then took an undisclosed amount of cash from the cash register.

In blurry security camera images, the suspect appears to be wearing a hood or t-shirt over his head, detectives said.

Anyone with information regarding these burglaries is asked to call the 1st District Investigative Section at 240.773.6084.  For those who wish to remain anonymous, Crime Solvers is offering a reward of up to $10,000 for any information that leads to the arrest of the suspect.  Anonymous tipsters can call Crime Solvers of Montgomery County toll-free at 1-866-411-TIPS (8477).
Posted by Robert Dyer at 5:00 AM

Given that the only characteristic actually visible in this low-quality image, is the suspect's skin color, what exactly was Dyer's purpose in posting it?

What a ridiculous comment. I've never before posted on this blog, and disagree heartily with much of Dyer's personal and political positions, but his blog is an excellent hyper local news resource and this is a prime example of getting information out to the public in a (very) timely fashion on an issue where any bit of evidence (including the pictures released by the police) could lead to suspect recognition and/or identification. It's bordering on asinine to imply a racial agenda behind this post.

I agree with 9:37. As much as many of us to find Dyer's personal and political opinions to be.... faulty(?)... This is a very good and informative piece.

I get the point of ridiculing Dyer, but the race card here doesn't work and is counterproductive to showing Dyer's fallacies.

6:02: Uh, maybe because the police want the photo to be disseminated to the public so they can get leads on the suspect? Think once in a while.