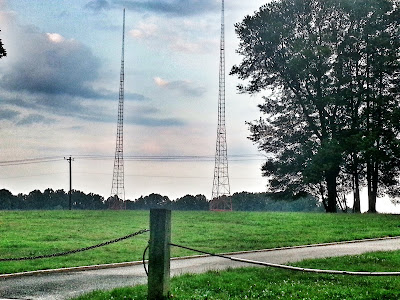 A Toll Brothers representative presented the development firm's early plans for the WMAL transmitter site at 7115 Greentree Road in Bethesda to the Western Montgomery County Citizens Advisory Board last night. Tom Mateya, the company's Director of Development, was introduced by Ellen Bogage of Chespeake Public Strategies, the firm hired by Toll to represent it in the community.
Mateya showed four potential configurations for the future neighborhood, which would have 330 homes in a 50/50 mix of single-family homes and townhouses. Prices will range from $900,000 for townhomes, to $1.1 million plus for single-family houses. 42 homes would be affordable MPDUs. Advisory Board member Jordan Cooper asked if the MPDUs would be clustered, or spread throughout the development. Mateya said Toll would disperse them throughout, as they have at their Olney development. He said the affordable homes would be attached units, possibly duplexes disguised to look like single-family homes.
Toll has retained Torti Gallas and Partners, Inc. as their architecture firm, and says the designs will be new and unique, not like any home designs you've found at other Toll residential developments. Torti Gallas designed King Farm in Rockville.

The firm has already done some geological and utility studies at the 75 acre WMAL site. Water, electric and gas service have been examined. Sewer and water were determined to be adequate in preliminary reviews, but Toll is aware of a 35-foot WSSC pipe section nearby which developer EYA is having difficulty with at their Rock Spring townhome site.

15% of the site is currently forested, and Toll Brothers wants to retain that. Many nearby residents have long used the site as an unofficial park, and have expressed concern about losing the green space. Advisory Board member Tara Flynn asked what plans the firm has to retain any of the green space, and who would control it, HOAs or the County. Mateya said they may reserve some space, potentially for parks and/or a school site. It would be up to the County how they would want to utilize it under that scenario, he said. Toll remains undecided on whether or not to include meeting or recreational facilities for the new community's residents, Mateya said. The company will ultimately decide based upon what it perceives as the current market demand for such shared facilities by its target homebuying audience.

Board member Scott Goldberg asked if pre-settlement solar energy would be utilized in the development. Mateya said there is no demand for solar in this area.

The biggest challenges Toll is dealing with on this project are schools, parks and transportation. Montgomery County planners and Montgomery County Public Schools recently hosted a school capacity community meeting to discuss overcrowding in the Walter Johnson school cluster, which a representative of the West Fernwood community last night said cannot hold another student at the moment. That meeting followed a Rock Spring redevelopment meeting at which residents pushed back on adding residential in an area with already-overcapacity schools.

Virginia Miller, the Board's resident representative, predicted there will be complaints if kids from the same neighborhood are forced to attend different schools. Yet, some Ashburton parents were pushing for redistricting at the aforementioned recent school capacity meeting.

Toll forecasts .575 K-12 students per home, meaning a potential generation of 189 students at the WMAL site. Those first students would arrive in either 2018 or 2019, as the first residents settle in the new neighborhood, Toll estimates.

Transportation is a major concern for nearby residents, but few feasible options exist. Board member John Bowis asked if a direct connection with Democracy Boulevard was possible. Mateya said that, while it is theoretically possible, and that Toll Brothers is still studying such a road, it is not likely. Stratton Park and a Bethesda Fire Department station stand in the way, and there would be engineering challenges regarding turn ratios and adequate space, he said.
What do exist are some stub roads, which an earlier master plan indicates could lead to a road connection between Greyswood Road and Greentree. It's unclear at this juncture what existing residents along Greyswood might have to say about that. Toll says earlier development in the neighborhood left the WMAL site as an island.

Mateya said that the company will submit its concept plan for the WMAL site to the Planning Board in November, and a preliminary subdivision plan in January 2016.

Map via Google Maps
Posted by Robert Dyer at 5:00 AM

This is a really good summary of the WMAL presentation from last night! Kudos! I'm impressed with this stepped up news reporting and no indicated bias. This was great.

Were you there last night? I wanted to say hi from the audience. I must say this is a surprisingly good news article. I like the different writing style too. Good improvement!

I would be interested to see how Toll's student numbers compare with those of Crispell (MCPS).

I agree - kudos on a good article. Wish more were like this.

Like the article format - keep it up and more pictures!

It's so positive to see how this new writing style sticks to the news and is well written and no one feels the need to challenge Dyer anymore. Makes total absolute great sense and we all would love to see more of it. This site has so much potential! Nice!

It's almost like it is a completely different person writing now. Love the new style. Great work!

It IS a stellar article, running true to the author's thoughtful pieces. The top photo invokes enough to be deemed art.

Actually as a speech and language analyst this appears to be a second writer. Completely different styles and habits and such.

Anonymous said...
This comment has been removed by a blog administrator.
10:15 AM

Anonymous said...
This comment has been removed by a blog administrator.
10:17 AM

A more reasonable reaction might be that those who troll dyer are finding posts like this reasonable as well, and no longer feel the need to press Dyer.

And the censorship is back.

You knew it was too good to be true. Back to the rants about "moribund MoCo nighttime economy".

and we all thought he had turned a new leaf with the unbiased reporting. This was so good and it got ruined by censorship.

9:38: Read my articles on 8008 Wisconsin, and the St. Elmo apartments, and Stonehall/Woodmont View, to name just a few - there is no difference whatsoever in the writing. There is, however, a palpable frustration in the air on your part. Too bad.

1:12: Removing spam and personal attacks is not "censorship".

3:22: Thanks for reminding me about MoCo's latest dropped economic development ball, The Advisory Board headquarters.

I recall your comments in another post deriding a reader from going off topic of the original post... And yet here we are.

So you should be deleting anything you say about Riemer by that logic.

And dyer is back at it. What a shame. Thought this site had turned for the better.

Lol so someone weighs in with an opinion that Dyer doesn't like and then dyer insults them.

I will consent to this plan on the condition that the name of "Buttermere Lane" be changed to "Butterbeer Lane".

"Stellar" might be going a bit far for a local blog news piece. lol. But certainly good.

"The Parisienne menu of Paul's looks delectable. Fluffy, crusty, chewy baguettes, fresh salads, savory sandwiches, all with reasonable caloric intakes for a meal (a little under 300 calories a sandwich; the French are so reasonable and healthy with regard to nutritional portioning). This way, one actually could nab a black currant macaron or tarte without much remorse (though I have always preferred les fromages over sweets)."

Has anyone pointed out yet that the houses on Greentree north of 495, sandwiched between 270 and the WMAL site, are actually in the Whitman HS cluster, not Walter Johnson? So kids on the same block are already going to be attending different schools when the new houses are built. It might make sense to move the boundaries so that the WMAL site goes to the Whitman cluster too. The elementary schools in the Whitman cluster are a lot less crowded. There are 492 kids at Burning Tree elementary (Whitman) versus 918 at Ashburton (WJ). In fact, maybe they should move that line all the way over to Fernwood and send more kids who currently go to Ashburton and Wyngate to Burning Tree.